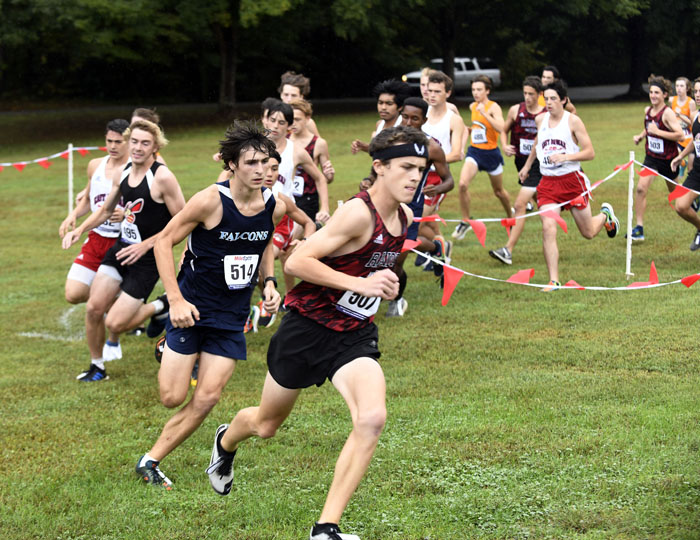 South's Eli Julian led the way for the Raiders to qualify for the state meet. East also qualified. File photo by Wayne Hinshaw, for the Salisbury Post

What won’t be normal will be the unusually heavy participation by Rowan County teams and individuals.

Also qualifying were the two girls teams (second-place East and third-place Carson) that provided most of the excitement at Salisbury Community Park.

Qualifying as individuals for state meets were Salisbury’s Sutton Webb (runner-up in the 2A Midwest Regional), Jake Denhard and Will Koontz; West Rowan’s Jenna Wheeler and Ethan Wilson; Carson’s James Anderson, and South Rowan’s Bethany Rymer. That means they were among the top seven in their regional who weren’t part of a qualifying team.

Gray Stone’s Emberleigh Pauley-Brown, who is from Rowan County, is the top runner for the Knights’ girls team and was 1A Midwest Regional individual champion.

Carson’s girls, directed by coach Les-Lee Peeler, have been the cross country team to beat in the county for a very long time and have filled the school trophy case with hardware. Salisbury edged the Cougars by a single point in 2016 and South beat them with a special group in 2018, but Carson has won six of the last eight Rowan County Championships. The Cougars were a close second the two years they didn’t win.

In early October, Carson, led by senior Camden Corley, who took second behind Webb, and junior Makayla Borst who placed third, won the county again at Dan Nicholas Park — and did it easily. South was second. East was a distant third. Carson’s seventh runner was faster than East’s fifth runner.

Two weeks later, in the South Piedmont Conference Championships held at Frank Liske Park, the tables turned. Different course, but the improvement from several of the younger East girls was striking. Borst (5th) and Corley (7th) still ran comfortably ahead of any of the Mustangs, but this time East’s fifth runner was faster than Carson’s third runner. East freshman Sadie Featherstone trimmed 80 seconds off her county time, It created quite a swing.

East’s girls were in a serious stack at 12-13-14-15 and 19. They placed second behind Lake Norman Charter, pushing Carson down to third.

Events which set the table for Saturday’s regional.

In a regional that figured to be ruled by the SPC squads, East’s girls knew they had a chance to finish in the top four and qualify for the state meet.

Rick Roseman, the guru of Rowan County cross and county and coach of some strong East squads in the past, made an impassioned speech the night before the regional. He reminded the team that East’s girls hadn’t made the state as a team since 1997, quite a drought. This was their chance to make their mark, to make some history.

The Mustangs were ready to answere the bell on Saturday morning at Salisbury Community Park.

Carson’s Borst was the fastest Rowan runner, placing eighth overall. But there were an incredible number of East Rowan/Carson matchups that looked more like the girls were competing in the 400 meters than in cross country.

East freshman Leah Edwards finished 11th, four seconds and one spot ahead of Carson’s Corley. East’s Meredith Bonner and Sadie Featherstone, still getting faster, crossed in 17th and 18th. East’s Jadyn Featherstone won a sprint to the line with Carson senior Brynn Sokolowski, as they battled for 22nd and 23rd. Carson’s Kendall Barbee edged East’s Iyanna Lynch in a scrap for 26th and 27th. East’s Savannah Wise was 31st, one place ahead of Carson’s Emily Landaverde.

East’s fifth runner provided the edge. That was the slim difference in East finishing second to Lake Norman Charter in the regional and Carson placing third. Both teams qualified for the state meet and got high-fives and pats on the back, but it was East that accepted the handsome plaque that went to the regional runner-up.

It was the first team hardware for the East girls in a long time. They’ve been chasing Carson for years.

There’s some advantage in having younger runners. They don’t know how fast they can go yet. They’re still figuring it out. They still can make major jumps. They’re not making college plans yet. They’re just excited about competing in high school.

Bonner has been a senior leader for a young group. A cheerful redhead, she’s been through a lot, including an auto accident last season and shin splints in this one.

“I guess I’m just injury-prone,” she said with a laugh. “This is a sport that will just kick you in the knees sometimes. But there was never any thought about giving it up because I love it too much. And now I get to be part of a great team. We stack up and we push each other and support each other.”

Edwards, a freshman, dark-haired and freckled, has a bright future.

“I can’t say I gave 100 percent today, because I tried to give more than 100,” Edwards said. ” Whenever it felt like it was too hard, I pushed myself harder. There are a lot of hills here, and  I sprinted down those hills and then kept my running pace going uphill. I stayed pretty calm through it all. It was such a good day for all of us.”

Saturday’s state meets will be interesting, to say the least.

South Rowan’s boys, led by Julian, an elite runner who was clocked in 16:54 in the regional, have the best chance to finish high, but seeing who prevails between the East and Carson girls will be entertaining.

Do Carson’s veterans have one more big race in them, the last cross country race for some of them?

Or is this East’s time?

“Our girls and boys teams are both peaking at the right time,” East coach Nermin Hodzic said. “And it’s nice to be relevant again.”