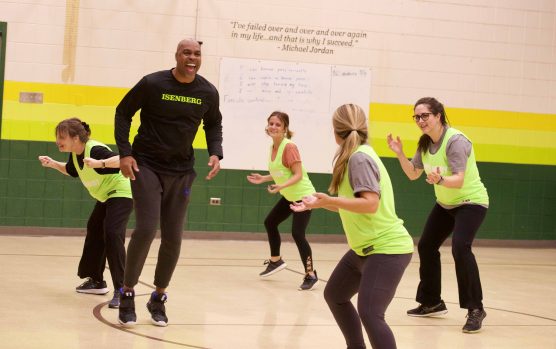 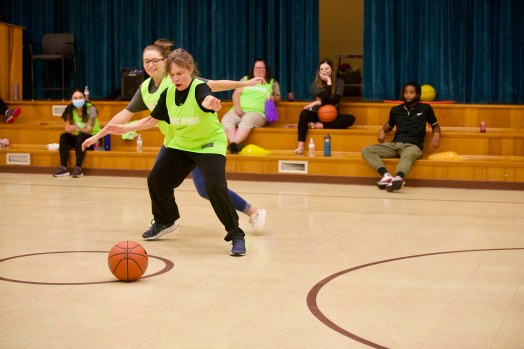 SALISBURY – Ricky Price’s team building programs are usually directed at people in corporate offices, but on Tuesday he was coaching teachers in a school gymatorium.

The former NBA and Duke basketball player had never worked with a group of teachers before he walked in to the media center at Isenberg Elementary to speak. His specialty is basketball training and team building for the boardroom, not the classroom.

There were two sessions on Tuesday, and they both started with interim principal Davian Ellison giving the faculty members an overview of the school’s testing metrics as a whole. She asked the faculty to take the numbers in as she flipped through slides showing scores by subject and grade level.

Then Price took over. He told them a bit about himself, how basketball became an obsession for him when he was 5, the hope that his mom would get to see him play on national TV, failing to make a game winning shot that would have made the crowd go wild and then later succeeding.

He talked through pillars he sees as essential for success, like mental toughness he developed while playing overseas in unfamiliar countries. His other pillars are confidence, competitive spirit, hard work, visualizing and imagining.

The talk eventually moved into the school’s gym for Price to make his point through basketball. Most of the teachers had never played before and got a crash course on the basics.

They learned to dribble, chest and bounce pass, make a pass off a rebound, shoot layups and defend the ball.

It wasn’t easy. There were a few spills, a lot of missed shots, awkward catches and ricocheting basketballs. Everyone was supportive. When one teacher was worried about being laughed at, Price assured her he would not. They huddled between drills and made the mean face Price prescribed as part of an effective defensive stance.

In the end, he gave them the skills to run a play used by college and professional teams, and they did it.

Price said one of his goals is getting people to let their guard down and go all in on the greater good for the team. The result is a better product. He said teachers have benchmarks and goals for teaching kids not unlike what he sees in the corporate world.

“It was gratifying to work with a different group and see what their everyday workload is in comparison to say, a Fortune 500 company,” Price said.

Price asked the group what their bad days are like. He normally hears about losing a chunk of revenue, but on Wednesday he heard stories like corralling wanton kindergartners while keeping the rest of the class in check.

School counselor DeAnne Law said it has been a crazy past two years and the experience was a good reminder of what the staff members are there to do as well as what they can do to support each other.

Third grade teacher Haleigh Jarman said she also got to know teachers in different grade levels that she was not very close with before.

“We got to come together and realize we are still one big school and the kids that are in this building are our students, they’re not your students or my students,” Jarman said.

Gavrielle White, a first grade Spanish teacher, said the program tied in well with the work of the school.

“I think a big piece was really the team building, connecting with each other in terms of relationships, getting in sync with each other,” White said, adding that everyone is there for one reason: the students.