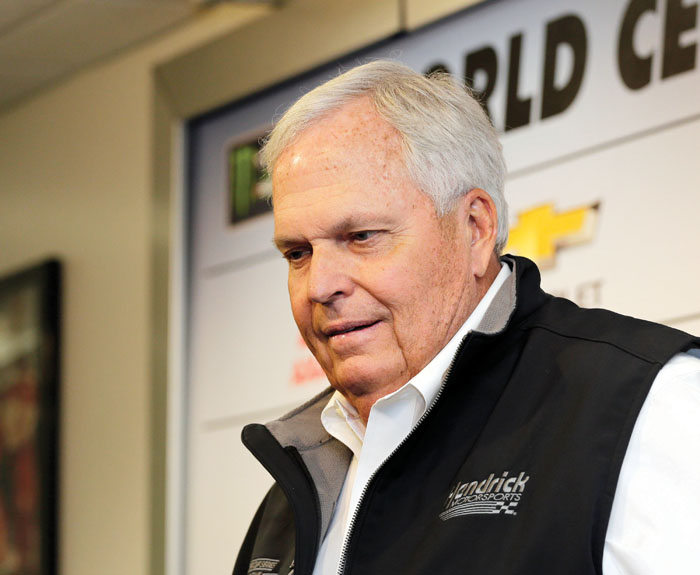 Rick Hendrick made sure to address the spat between drivers Kyle Larson, the reigning Cup champion, and Chase Elliott quickly.(AP Photo/Terry Renna, File)

With a 14th NASCAR Cup Series championship on the line this weekend, team owner Rick Hendrick addressed a sponsorship extension signed with Liberty University before the school came under scrutiny for its handling of sexual assault allegations.

Hendrick Motorsports last month reached a new five-year agreement to extend the school’s support of driver William Byron and the No. 24 Chevrolet. Liberty will serve as the primary sponsor in 12 Cup races annually through 2026.

The extension between Hendrick and Liberty was announced in mid-October, before a report by ProPublica detailed accusations  that the university discouraged students from reporting sexual violence or outright dismissed reports of assault. Twelve women filed a lawsuit in July, accusing the evangelical Christian institution of a pattern of mishandling cases of sexual assault and harassment, and fostering an unsafe campus environment.

Jerry Falwell Jr. resigned last year from the presidency at Liberty and also apologized after posting a vacation photo that showed him with his pants unzipped and his arm around his wife’s pregnant assistant.

The photo was taken on a luxury boat that belonged to Hendrick, who has drivers Chase Elliott and Kyle Larson racing for the championship Sunday at Phoenix Raceway. Hendrick was not on board the boat, not were any employees of Hendrick Motorsports employees.

“Things that happened years ago, whenever it did happen, they’ll make it right and move on,” Hendrick said Tuesday. “Things like that, I mean, it’s not pleasant, but they’re dealing with it. They’re being very up front, very transparent.”

The school began its support of Byron in 2014 when he drove late model stock cars and has been a 12-race primary sponsor since his 2018 Cup Series rookie of the year season. Byron made NASCAR’s playoffs this season as part of Hendrick’s four-driver stable.

Hendrick Motorsports was won 16 Cup races this season and Larson’s win in May at the Coca-Cola 600 gave the organization a Cup-series record 269th victory.

While some race fans have called on Hendrick to ends its relationship with Liberty, the
NASCAR Hall of Famer said neither he nor Hendrick Motorsports has received any blowback from the deal.

“They’re great people up there. They’ll get it worked out,” the 72-year-old Hendrick said. “That’s a situation that’s unfortunate. But they’ll get it resolved and move on.”