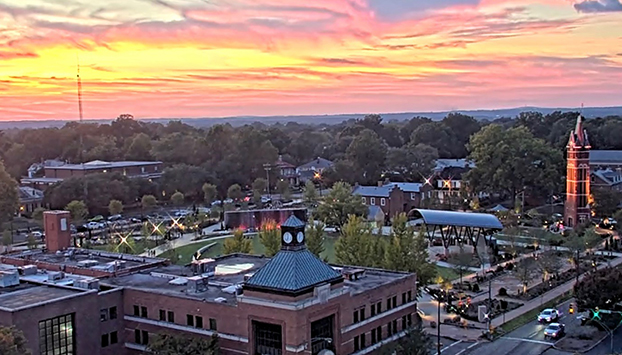 Photo submitted - Bell Tower Green seen during a sunset from a camera atop the Plaza in downtown Salisbury.

Stone, a local artist and Catawba College graduate, will begin her concert at 4 p.m. Stone has a local and regional following with original songs based in gospel, blues, jazz and soul. She lives in Salisbury where she prides herself on bringing music composition and performance to youth in the community.

The second act to perform, taking the stage around 4:50 p.m., will be internationally renowned folk, bluegrass, classical and pop musicians “The Kruger Brothers.” Originally from Germany, the Kruger Brothers have developed an international audience for traditional “mountain music” inspired by Doc Watson, but they have also evolved into artists that transcend any particular genre.

Jens Kruger was inducted into the Banjo Hall of Fame in Oklahoma three weeks ago, and they have been headliners at Merlefest and other music festivals. They leave on Sunday to begin a tour in Switzerland. The performance is expected to bring out fans from across the region who will not be able to see them again for a while.

The last act slated to perform around 6:30 p.m. is Sydney Lett, a Mount Ulla resident who operates a horse rescue farm and is a country artist. Lett just moved to Rowan County earlier in the year, and this is her first large performance in Rowan County, although she also has performed in Iowa, Nashville, Charlotte and other larger markets.

Local television personality and Salisbury resident David Whisenant will serve as the emcee for the evening. The concert is expected to be completed by shortly after dark.

The event is organized by the Salisbury Parks and Recreation Department. Director Nick Aceves said this is the first public concert to be held in the park. It opened to the public a little more than a month ago and city government took ownership about one week ago.

“Our staff wanted to host one large event to whet the appetite of the community for the public events we hope to host on a regular basis beginning in the spring,” Aceves said. “With weather getting cooler quickly, we knew that we had a narrow window to pull this together. We are thrilled to have been able to secure such remarkable talent for the very first event.”

Bell Tower Green, Inc. has continued to work with the city of Salisbury on completing construction elements under the terms of their contractual agreements.

“We have a great working relationship with the city staff, and we encouraged them to have this event while the excitement about the park is so great and the weather is sill cooperative,” said the nonprofit’s vice president, Jason Walser. “There will continue to be elements of the park that are not complete until probably the end of the year due to supply chain issues and contractor schedules. But we all believe that the park can handle an event like this, and we think that our community deserves a big celebration in the park before winter sets in.”

There will be limited vendors in the park selling coffee, hot cocoa and beer. Attendees can also shop at downtown stores and restaurants. Guests are asked to bring their own chairs or blankets. No seating will be provided.

For more information, contact the Salisbury Parks and Recreation Department at 704-216-7529.