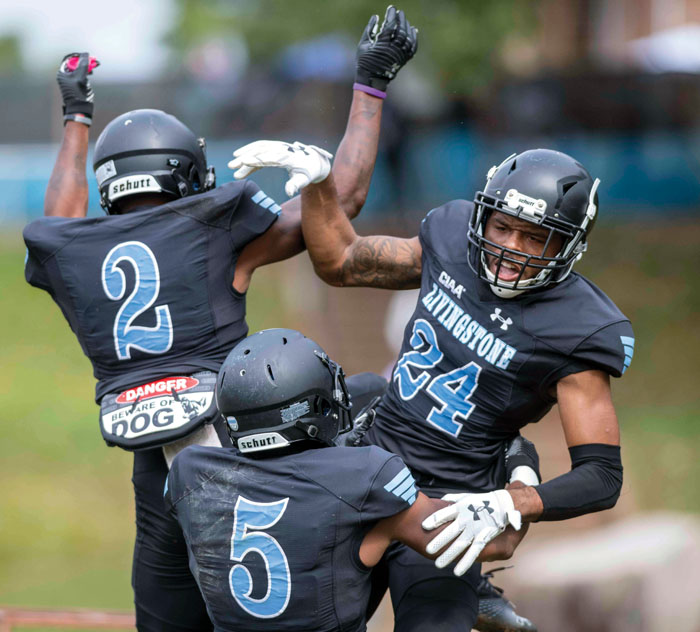 SALISBURY — Livingstone heads to Johnson C. Smith’s Irwin Belk Stadium on Saturday as a 6-point underdog and with a reasonable chance to close the season with a victory.

Of course, Johnson C. Smith is also excited about a potential victory. The Golden Bulls dropped their first seven, but now they’ve got a good shot at ending a shaky season with a two-game winning streak.

Both teams managed to beat St. Augustine’s, with the Golden Bulls finally getting into the win column by trouncing St. Aug’s 34-13 last week as the crowning moment of homecoming festivities.

While there’s not much on the line between the Golden Bulls and Blue Bears except pride and a chance to take some momentum into the offseason workouts and recruiting battles, there’s a deep enough history running through this rivalry to make every meeting meaningful.

Five years after the Civil War ended, Biddle Memorial Institute was founded on donated land on Beatties Ford Road in Charlotte. The purpose was to provide educational opportunity for Black students who wanted to learn a trade or prepare for teaching careers or the ministry.

In 1892, Biddle traveled to Salisbury for the first football game between Black colleges and beat Livingstone 5-0 somewhat controversially in the snow on Livingstone’s front lawn. That game was the starting point for a traditional rivalry that has stood the test of time for 129 years. That’s why they call these LC-JCSU games Commemorative Classics.

Biddle was renamed Johnson C. Smith in 1923 to honor a generous donor.

The Golden Bulls have dominated the rivalry recently. They’ve won nine of the last 11 meetings and they won 34-6 in 2019 when the programs clashed in Salisbury.

However, Livingstone won on its last trip to Charlotte, taking a 20-9 victory in 2018.

North Rowan graduate Tsion Delaney, a true freshman safety, has seen quite a bit of action for the Golden Bulls and has made 14 tackles.

Livingstone brings some positive numbers into the game.

Livingstone ranks 12th nationally when it comes to preventing passing yards.  Part of the explanation for that is Livingstone has usually been behind and teams run the ball more when they’ve got the lead, but that stat also indicates LC is well above average at defending the pass.

Livingstone is even in the turnover battle for the season. That’s a fairly incredible stat for a team that is 1-8. You would expect the Blue Bears to be minus-10,  but Livingstone has 18 takeaways to offset 18 giveaways.

On top of that, Livingstone has blocked four kicks, which means the Blue Bears have some of the more disruptive special-teams units in D-II.

J.C. Smith is minus-5 in turnover ratio for the season and hasn’t scared anyone offensively. The Golden Bulls rank 132nd in D-II with 294.5 yards per game.

J.C. Smith did prosper offensively last week against St. Augustine’s. Antonio Wallace threw for 198 yards and four touchdowns, and the Golden Bulls got 100-plus rushing yards from two different backs. In other words, the Golden Bulls did whatever they wanted to do.