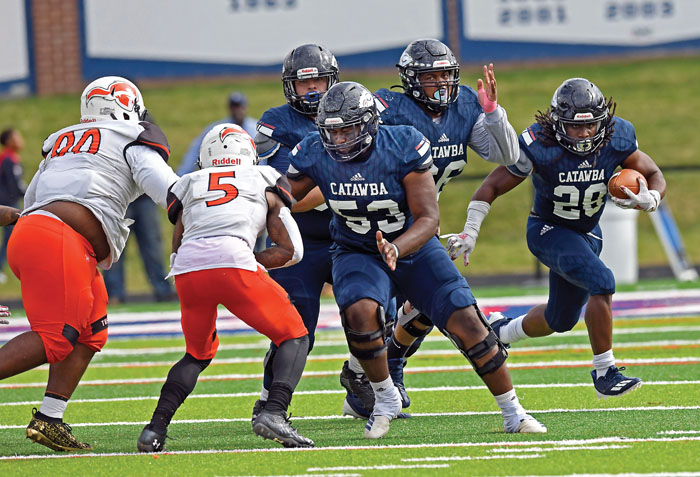 Catawba will be looking for blockers to clear the way for Jyrea Martin (28) against UVA Wise. The freshman has run for 569 yards so far. File photo by Wayne Hinshaw, for the Salisbury Post

SALISBURY — The University of Virginia’s College at Wise.

That’s the school Catawba College’s football team is officially playing at home on Saturday afternoon at 1 p.m., although everyone refers to it as UVA Wise.

UVA Wise doesn’t like the hyphen. And it’s also important that the “A” in UVA is upper case.

The small town of Wise (population: 3,000) sits at an elevation of 2,451 feet in the mountains. The school’s athletic teams, understandably, were known until recently as the Highland Cavaliers. Now UVA Wise is fine with just plain ol’ Cavaliers.

UVA Wise has only been in the South Atlantic Conference since 2019, so they’re still the new kids on the block. The Cavaliers were in NAIA not that long ago, but they’re quickly catching up in the SAC in many sports, and they’ve already made an impact in some such as women’s basketball.

The name to know for the football Cavaliers is Lendon Redwine.

It’s a cool, superstar name, for sure, especially for a quarterback.

While Redwine sounds like a modern scrambler, he’s actually a very old-school slinger. He has negative rushing yards for the season, but he’s completed 208 of 347 passes for 2,197 yards and 20 touchdowns. He leads the SAC in a lot of passing categories.

Pass rush obviously will be critical to the Indians (5-2, 2-2) on Saturday.

UVA Wise is 4-5 overall and 3-4 in the SAC. The eye-catching victory is the surprising one the Cavaliers posted against Lenoir-Rhyne on Oct. 2.

UVA Wise lost to the two teams that beat Catawba — Mars Hill and Newberry. UVA Wise also lost to Tusculum, a team Catawba beat last week, and to Wingate, a team Catawba didn’t get to play.

Catawba got back on track for head coach Curtis Walker in some respects last week, ending a two-game slide by getting back on the right side of the turnover battle and by reviving the running game.

Catawba, which is 5-0 at home, is favored by a touchdown over UVA Wise by the Massey Ratings.

Freshman Jyrea (it’s pronounced Jy-ree-A) Martin has run for 569 yards and is coming off a productive, difference-making game. Ken Avent III has thrown for 933 yards and eight touchdowns, while running for 344 net yards and four TDs.

Kujuan Pryor has 27 catches for 306 yards and three TDs.

Catawba is incurring 75 yards per game in penalty flags and would like to improve in that area. UVA Wise had just three penalties for 15 yards when it edged Limestone last week.

It will be Senior Day for the Indians, who will play at Lenoir-Rhyne in the final week of the regular season.