Salisbury soccer cruises past West Stokes to advance in playoffs 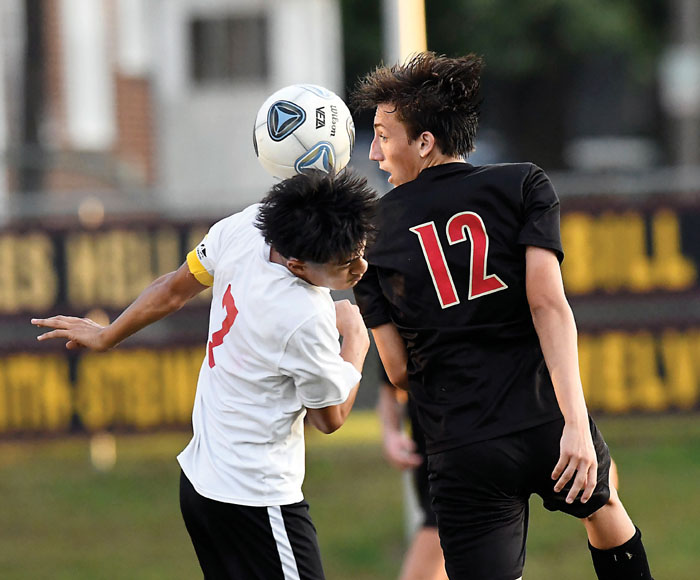 Salisbury’s Colin Donaldson (12) and Thomasville’s Derrick Cabrera battle for the ball during a match earlier this season. Donaldson scored three goals in Salisbury’s 7-0 win over West Stokes on Monday. photo by Wayne Hinshaw

SALISBURY —  A team expected to fly this post-season got its wheels off the ground Monday night.

The third-seeded Salisbury’s boys soccer team began paving its path in the 2A state playoffs with a stress-free, 7-0 shakedown of visiting West Stokes.

“I don’t know, a win’s a win,” long-time coach Matt Parrish shrugged after the Hornets earned a second-round berth against East Davidson. “You never know what to expect in the first round. You never know what’s gonna get off the bus and how your guys will respond.”

Although West Stokes (8-9-1) entered as a No. 30 seed out of the Mid-State Conference, it was riding a five-game winning streak due to a couple of awarded forfeits. Salisbury (18-2) nonetheless peppered 23 shots-at-goal, scored four times in a span of 2:24 midway through the first half and turned the match into a leisurely round of batting practice. Senior Colin Donaldson scored three goals, Will Webb assisted twice and the SHS defense limited the Wildcats to two legitimate shots.

“You’ve got to take it game by game,” said Webb, the right wing who has potted a team-best 25 goals this season. “But when you beat a team 7-0, it’s a big confidence builder. Still, you’ve got to keep your head in the game at all times.”

Third-year West Stokes coach Kelsey Perrell called Salisbury “a very, very tactical team,” and added, “They’re a very technical team, skillful team, tied-together as a team. We haven’t seen that aspect of things in our conference. We wish them the best.”

After pressing into the West Stokes end for much of the opening 10 minutes, Salisbury connected in the 11th. Striker Daniel Cuevas put the Hornets ahead when he gathered a loose ball in the penalty area, dribbled two steps to his left and slid a daisy-cutter past freshman keeper Myles Knox.

“I didn’t hit it hard,” Cuevas said afterward. “But I always like to go wide like that. I saw the opportunity, saw the shot and just took it. That gave us a little boost and made us realize we could dominate this game.”

It took all of 47 seconds for Salisbury to nourish its lead. Donaldson made it 2-0 when he found a seam in the West Stokes defense, deked the keeper and pumped a close-range shot into the lower left corner.

“I remember seeing a gap between two defenders so I touched through,” the senior left wing reported. “They had a little miscommunication in the back. I think I went through four guys, then got a little lucky and just placed it left side.”

The first half still had 27:31 to live when Donaldson buried a rebound for his second marker of the night. “Another boost,” he said. “We didn’t need to stress as much. Honestly, a lot of us were worried about this one.”

Webb offered a glowing tribute. “When we got the third goal, it was great,” he said. “Colin fully deserved that hat trick. He’s worked for it all year. For him, it was a great introduction to playoff soccer.”

Fifteen seconds later it was 4-0 — after Webb put it on a plate for Donaldson, who blasted a 25-yard screamer that caught the back twine. “I had beaten the same defender down the left side before,” he said. “And I knew I wanted to switch it up. So I cut to the right, found some open space, saw the net and thought, ‘Why not?'”

It was 5-0 at halftime following teammate Leo Fragoso’s doorstep conversion on a ball that barely crossed the goal line.

“I liked that we scored goals without Will Webb having to be the focal point,” Parrish noted. “I liked that we moved the ball pretty well, that we defended the midfield and that everybody got some playoff minutes. Whoever we play next, we’ll be well-rested.”

Salisbury added a pair of second-half goals — Luke Graeber’s 30-yard floater on a free kick and a perfectly executed connect-the-dot score by Carlos Henriquez, off a lovely centering pass from Webb.

When it ended, the Hornets felt they’d announced their intentions and taken an all-important first step.

“Especially winning like this,” said Cuevas. “This doesn’t usually happen, not in the playoffs. Other teams are going to see what we did tonight.”

What they’ll see is a team that’s achieved post-season liftoff.

NOTES: Donaldson’s goals were his 11th, 12th and 13th of the season. … Knox was credited with 15 saves. Salisbury’s Wade Robins made one stop and kept a clean sheet, recording the team’s 11th shutout. … Salisbury has won two straight matches and five of its last six. The Hornets enjoyed a 12-game winning streak earlier this fall. … East Davidson (12-5-1) advanced with a 1-0 first-round victory over Patton. The 14th-seeded Golden Eagles bring a five-game unbeaten streak (4-0-1) to Ludwig Stadium on Thursday night, though Parrish hopes to move the match to Wednesday due to an unfavorable forecast. SHS earned 2-0 wins over East Davidson on Sept. 20 and Oct. 13.