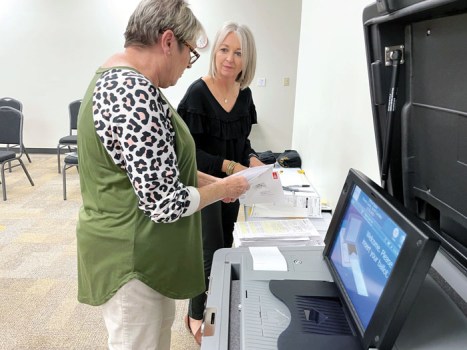 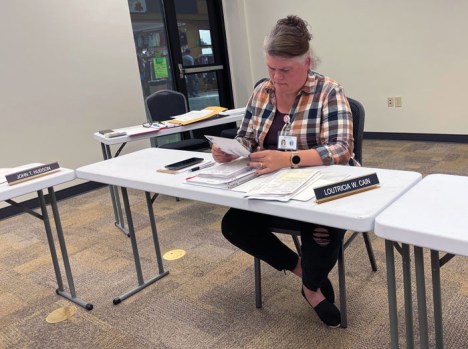 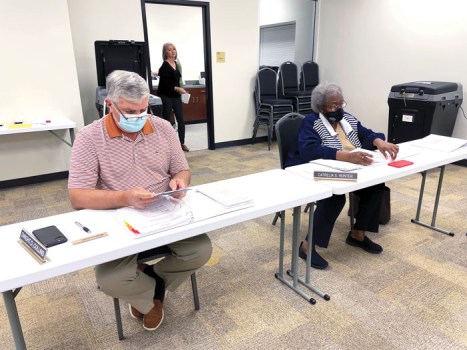 Natalie Anderson/Salisbury Post — The Rowan Board of Elections members Dwight "Dave" Collins and Catrelia Hunter inspect absentee by mail ballots cast for the 2021 municipal election Monday, Nov. 1, before tabulating them at the elections office located at 1935 Jake Alexander Boulevard West.

SALISBURY — While Election Day is expected to attract a few thousand Rowan County voters, turnout for this year’s early voting period exceeded the same stretch for the 2019 municipal election.

As a result, this year’s election is the first municipal race in which voters could cast ballots on Sunday.

As of Monday, a total of 2,608 voters have cast a vote during the early voting period, which represents 6.4% of the 40,589 eligible voters. This weekend drew the most voters of the 17-day period, with 274 voters casting a ballot Friday and 226 casting one on Saturday. A total of 227 voters voted on Sundays during the period.

The number of absentee by mail ballots is also higher this year compared to 2019, with 104 tabulated Monday compared to the 76 returned at this same time in 2019, according to Rowan County Board of Elections Executive Director Brenda McCubbins.

On Election Day in 2019, a total of 5,412 votes were cast, including those who utilized curbside voting, which is allowed for senior adults and those with disabilities. McCubbins said she anticipates this year’s overall turnout will be slightly higher than turnout in 2019 once all votes have been tabulated.

McCubbins said demographic information about voters in the 2021 election is not yet available. In 2019, the final turnout was 7,815 votes, which represented 20.3% of all eligible voters in Rowan County.