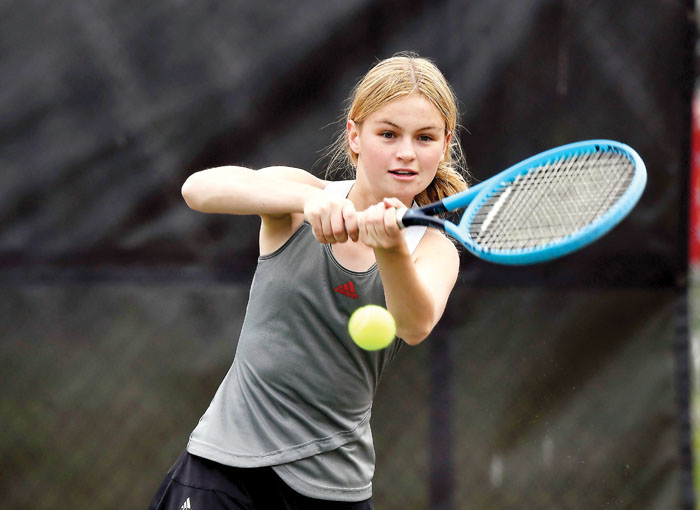 SALISBURY — A 3-3 split in singles didn’t seem out of the question for a while, but Salisbury’s girls tennis team found another gear and swept Burns 6-0 in Monday’s third-round home match.

Doubles weren’t required. The Bulldogs were able to board the bus back home for Cleveland County at about 6 p.m.

“Burns has a good team,” Salisbury coach Milt Griffith said. “When you get to the third round, those easy matches are far behind you.”

“I got winded today,” Salisbury’s No. 4 player Kate Burton said. “That hasn’t happened in a while.”

Burton may have gotten gassed, but the score sheet didn’t reflect any exhaustion. She was one of the 6-0, 6-0s.

“I focused on every single point,” Burton said. “I was able to wait for just the right shot.”

However, there was tension on the other three courts, where the Bulldogs (13-3) were putting up a serious fight.

“We had to be up on our toes a little bit because they were making us earn it,” said senior Abby Campion, who plays No. 2 for the Hornets.  “I was having an off day, sort of a funky day, and I felt pretty tired. I had to decide that even though it wasn’t my day, I could still find a way to make it work.”

Campion won the first set 6-1 against Chloe McCoy, but lost the second one 7-5.  She got down in the third-set tiebreaker but came back to win 10-8.

Abbey Lawson ventured into a roller-coaster match with Mackenzie Pendleton. There were about as even as it gets and they were running each other all over the place. There were rough stretches for Lawson, but she always righted the ship just in time and prevailed 6-3 and 7-5.

“The girl I played was very tough,” Lawson said. “I had to try for the corners against her and I was able to make some shots. I was able to outlast her.”

On court No. 5, in a grinding struggle of human backboards, Ellison Frick, Emily’s twin sister, showed the patience of a guidance counselor. She won a test of wills, 6-3 and 6-4.

“Sometimes it just comes down to who wants it more, and our girls will do what they need to do to win,” Griffith said.

The Hornets move on to Wednesday’s West Regional final. While they’re the No. 1 seed and will be playing on their home courts, they’ll be the underdogs.