With 70.5% of the vote, Barnhardt wins race for Granite Quarry mayor 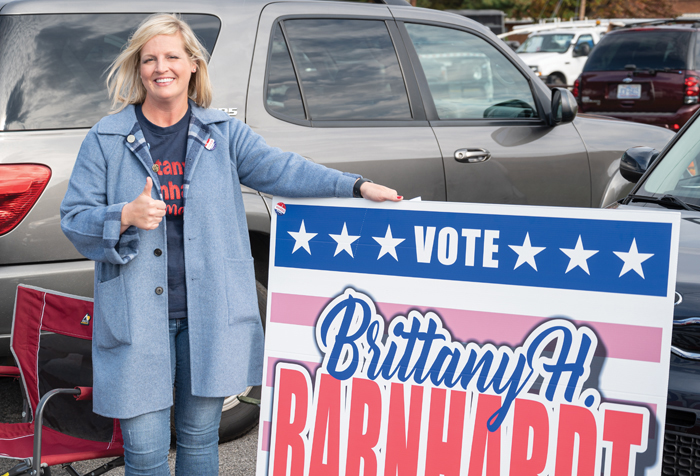 SALISBURY — Brittany Barnhardt walked away with a decisive win in the race for Granite Quarry mayor on Tuesday.

“I am ecstatic,” she said Tuesday night. “It is very humbling to see the numbers and I am blown away at just the love and support I’ve received.”

The Salisbury native had never run for public office before. She campaigned with aldermen candidates John Linker and Kim Cress, both incumbents who also won reelection. Brinkley, a Granite Quarry native, has served multiple terms on the Granite Quarry Board of Aldermen.

Barnhardt owns a real estate business with her family. She began her career as a first responder. After graduating from Wingate University, she worked as a paramedic with Rowan County EMS and Novant Health. She also volunteered with the Rowan County Rescue Squad. Barnhardt currently serves on Granite Quarry’s Zoning Board of Adjustment, its Revitalization Committee and the executive board of the Granite Quarry Fire Department Auxiliary.

Barnhardt said she ran to get more involved in the community with the hopes of pushing along the town’s park plan.

On Tuesday, Barnhardt said she wants to continue the good work of the board and she is looking forward to working with a supportive Granite Quarry Board of Aldermen.

She’ll will step in for outgoing mayor Bill Feather, who is finishing his third term as mayor. He decided to run for reelection at the last minute in 2019. This time, he decided to bow out from the position.

Brinkley is a former alderman and town fire chief who owns W.F. Brinkley and Son Construction. He has run both successful and unsuccessful campaigns and served a total of 14 years on the town’s board. Most recently, he ran for the board in 2019, but he was defeated.

“You always want to win, but it’s not that big a deal,” Brinkley said, adding he does not have any specific intentions to run in the future and has plenty of other things to do.