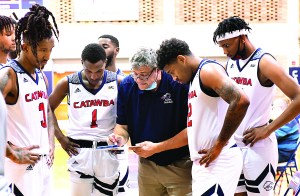 The Royals of Queens University of Charlotte have been picked to win the 2021-22 South Atlantic Conference Men’s Basketball Championship as voted by the League’s head coaches. The Royals picked up seven first-place votes and received 150 total points in the poll.

Queens finished the 2020-21 season with a 16-6 record, including earning its sixth consecutive NCAA Southeast Regional bid and finishing as the runner-up of the 2021 SAC Men’s Basketball Tournament Championship. The Royals enter the 2021-22 season as the No. 16 team nationally according to the National Association of Basketball Coaches (NABC). Senior Kenny Dye is back to lead the way for the Royals. The preseason all-conference pick was an All-SAC second team and NABC All-District selection after averaged 13.5 points and 5.8 assists last season.

Carson-Newman University earned the No. 2 position in the poll with five first-place vote and 145 total points. The reigning SAC Men’s Basketball Tournament Champions were 16-6 last year earning an NCAA Southeast Regional bid for the first time since 2018. Preseason All-SAC selections EJ Bush and Ren Dyer will look to lead the way for the Eagles once again this season. Bush lead the team with 13 points per game, while Dyer averaged 11.6 points per game. Bush pulled down 4.8 rebounds per game and Dyer lead the team on the boards with seven rebounds per game.

Earning the No. 3 spot in the preseason poll was Tusculum University with 131 total points. The Pioneers went 14-6 overall and were 12-4 in the SAC last season. Led by last season’s SAC Player of the Year, Trenton Gibson, the Pioneers also earned a bid to last season’s NCAA Southeast Regional. Gibson returns for his senior season in 2021-22 after averaging 18.8 points, 8.2 rebounds, and five assists per game a season ago.

At No. 4 in the poll was Lincoln Memorial University who picked up a first place vote and 128 points from the head coaches.  The Railsplitters closed out their 2020-21 season at 19-4 overall. They won the NCAA Southeast Regional and advanced to the NCAA Division II Elite Eight. LMU will be under new leadership this year as long-time assistant coach Jeremiah Samarrippas takes over the head coaching duties.

Newberry College followed as it received 108 points, landing in the No. 5 position. The Wolves went 9-6 overall last season.

Wingate University earned the No. 6 spot with 93 points.  The Bulldogs went 11-9 overall a season ago.

Lenoir-Rhyne University landed at No. 9 in the preseason poll as it collected 80 points from the head coaches.  Last season, the Bears went 9-7 overall.

Coker University came in at No. 10 with 50 points, followed by Limestone University with 44 points at No. 11, and Mars Hill University at No. 12 with 42 points.  Rounding out the poll of 13 teams was the University of Virginia’s College at Wise with 27 points.

The 2021-22 men’s basketball season gets underway with non-conference games on November 12, with a full slate of league action starting on November 17.

All of the SAC men’s basketball games will be streamed live online for free through the SAC Live Digital Network. Links to live video and live stats of all the games, as well as a full schedule of games can be found by visiting the men’s basketball page on TheSAC.com.