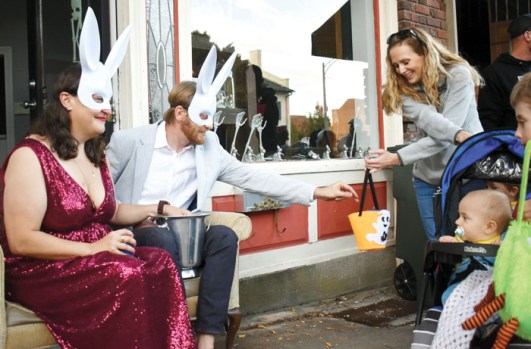 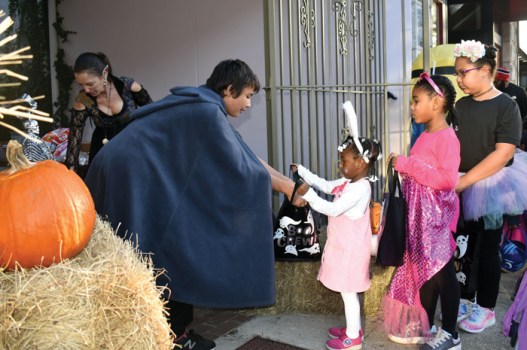 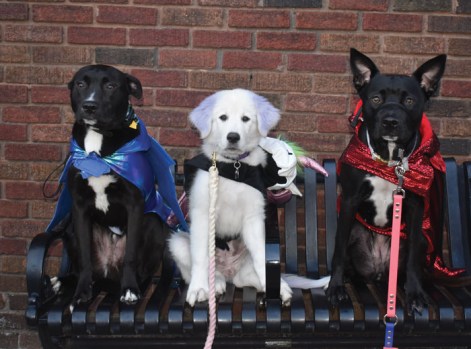 Momo, Kiki and Mazda might not have gotten any candy, but the three dogs were dressed up for trick-or-treating on Saturday evening. Ben Stansell/Salisbury Post 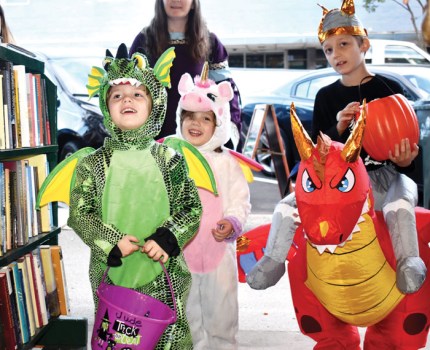 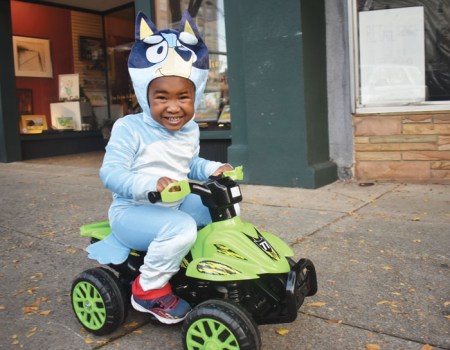 Avery Butler, dressed as the children's television character Bluey, drives down the sidewalk in downtown Salisbury, likely on her way to get more candy. Ben Stansell/Salisbury Post 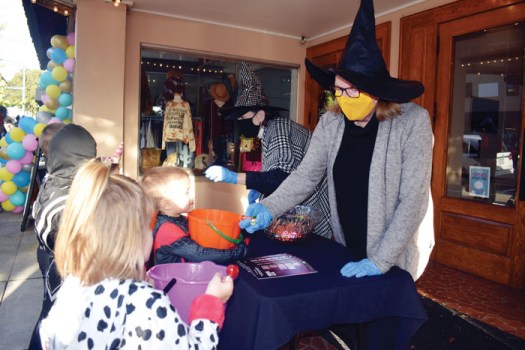 The hour of trick-or-treating kicked off Downtown Salisbury’s Halloween Fun Fest. A joint effort organized in conjunction with Salisbury Parks and Recreation, the family-friendly event was back after a year off due to the COVID-19 pandemic.

Most of the 37 shops, restaurants, breweries and boutiques who participated ran out of candy before 6 p.m. as throngs of dressed-up children, decked-out dogs and some costumed adults made their way up and down Main Street.

Aubrey Foster, co-owner of Lora Belle Baby, said she enjoyed seeing everyone’s faces back downtown, especially those not hidden behind a Batman or Spiderman mask. Lora Belle has participated in the Halloween Fun Fest before, but Foster said she was surprised to see the number of people that swamped Main Street on Saturday night.

“I knew people were going to come out because it’s the first time since COVID that everybody is getting to trick-or-treat like that,” Pinckney said. “It was pretty cool. It was a big turnout, to say the least.”

Pinckney said her only wish was that they’d stocked up on more candy bars.

With COVID-19 still a concern, the event’s organizers decided to alter some of the festivities.

“Our normal Fun Fest is carnival-style, lots of games and is very high-touch,” Koontz said. “This year, because we’re still in COVID time, we eliminated the touch components and added new things like the entertainers and movies, which are things we’ve never done for the Fun Fest before.”

Once the trick-or-treating finished, families flocked to Bell Tower Green Park, where street performers juggled and blew bubbles that floated into the sky. Standing on the green, Timothy Robinson held his daughter, Seana, into the sky so she could pop stray bubbles too high for others to reach.

Robinson said the family enjoyed trick-or-treating on Main Street and that his daughter asked him to go to the park afterward. Living near downtown, Robinson said the park has become a family-favorite already.

“We loved it,” Robinson said. “Just having the Bell Tower here is great … We can’t wait to see what more they have here, like the events in the future.”

The Halloween Fun Fest is among the first larger events to be held at Bell Tower Green since the park opened Oct. 1.

“To actually see a park come to fruition in the downtown is truly amazing,” said Latoya Price, interim director of Downtown Salisbury. “I’ve seen some other downtown parks, but this one here in Salisbury tops them all and having this park has been a big benefit for our downtown shops and boutiques and merchants.”

The night also featured a costume contest to recognize the best dressed trick-or-treaters. Prizes for scariest, funniest and most creative were handed out in several age groups. The winner for scariest costume in the adult category was, unsurprisingly, a man dressed as the COVID-19 virus.

The costume contest was followed by a showing of “The Addams Family” on a big screen placed in front of the Bell Tower Green amphitheater. After the sun set, jack-o-lantern luminaries designed by members of the community were lit under archways in the park.

The Halloween Fun Fest might be one of the first events hosted at the new downtown park, but it won’t be the last.

Price said she was thankful for all the business owners, city employees and visitors who made the Halloween Fun Fest a success.