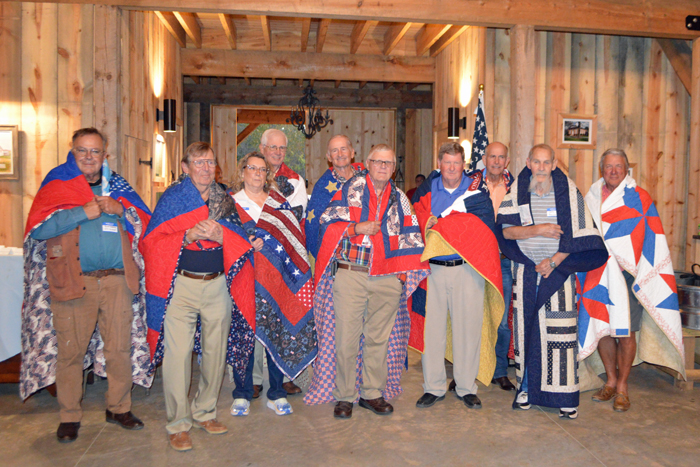 Veterans from the West Rowan High School Class of 1966 were awarded Quilts of Valor. Submitted photo

MT. ULLA — The Grateful Quilters of Mooresville awarded 10 Quilts of Valor on Oct.  22 in Mt. Ulla at the Sloop Brothers dairy barn.

The veterans were attending the West Rowan High School class of 1966 reunion (along with the wife of one of the veterans who is a veteran herself but was not part of the 1966 class).

Susan Weaver, a member of the West Rowan class of ’66, made all of the quilts.

Making the presentation was  Sharon Bormann, group leader, along with Weaver, Sonya Yeager and Jean Cable

The Quilts of Valor Foundation started in early 2003 by a quilter Catherine Roberts, a Blue Star Mom whose son was deployed in Iraq as a Humvee gunner.  One night, she had a dream where she saw her son and his fellow comrades wrapped in quilts, being comforted from the ravages of war.  With that vision and the help of a few fellow quilters, she started sewing in her living room. The first QOV was awarded to a veteran from Operation Iraqi Freedom in November 2003.

Since that time, the mission has evolved to include all active-duty members and veterans of the armed forces from all conflicts and wars. All 50 states now have QOV chapters. Grateful Quilters of Mooresville is one of these. As of this month, 283,763 quilts have been awarded nationwide.

Grateful Quilters of Mooresville formed in February 2019 and has awarded 69 quilts.

The Quilts of Valor  bring a three-part message to veterans:

• Quilters realize that freedom is not free. The cost our freedom is the dedication of men and women like you, and this quilt says thank you for your sacrifice and your willingness to lay down your life for our country.

• Finally, this quilt is meant to comfort you as you are forever in our thoughts and our hearts.

Those receiving quilts were:

• Staff Sargent Ed Ellis served in the Army from 1969 to 1971. Stationed at Ft. Bragg and Vietnam, he was in the infantry, earned the Combat Infantry Badge and attended the Non-Commissioned Officers Candidate School. He worked in civil engineering and the concrete industry after discharge from the Army.

• Sgt. James Greene served in the Army Reserves from 1968 to 1978. He was a clerk and drove a five-ton truck. After discharge, he worked in insurance for 40 years and served on the Rowan County Board of Commissioners for seven years.

• Maj. Steve Hartzoge served in the Air Force from 1970 to 1973 as an enlisted member, working as an air traffic controller, and from 1980 to 1994 as an officer, working in communications and logistics. Assignments included Biloxi, Mississippi; Hill AFB, Utah; Langley, VA; Italy and Germany. Hartzoge served in support of Desert Storm. He later taught middle school math, retiring in 2015.

• Cpl. Johnny R. Karriker served in the Army from 1968 to 1969. Assigned to Long Binh, South Vietnam; Ft. Bragg and Ft. Carson, Colorado, he worked in heavy equipment maintenance. After discharge, he worked in construction, carpentry and plumbing for 39 years.

• Robert Redden served in the US Army from 1966 to 1970. He received an alternate nomination to West Point, but the primary candidate took the slot. He joined the Army in May 1966 and was assigned to Vietnam in September. He stayed for a year with a few extensions, returning to Ft. Bragg in April 1968 where he completed training as a special forces soldier. He received an early discharge in January 1970 to return to college at UNC Charlotte.

• Sgt. John S. Sloop served in the Army National Guard from 1970 to 1976. Assigned to Ft. Knox, Kentucky, he worked in Armored Reconnaissance Cavalry. After discharge, he worked for Edward Jones investments for 21 years.

• Spec 5 Bill Watson served in the Army from 1971 to 1972. Assigned to Ft. Rucker, Alabama, he was a morning report clerk and a chemical engineer assistant. After leaving the military, he worked at Union Carbide for 32 years.