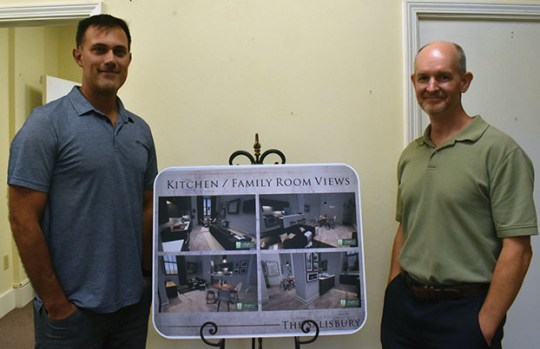 Josh Barnhardt (left) and Pete Bogle (right) stand next to a placard displaying renderings of the apartments they are developing in The Salisbury building at 121 W. Council St. Ben Stansell/Salisbury Post 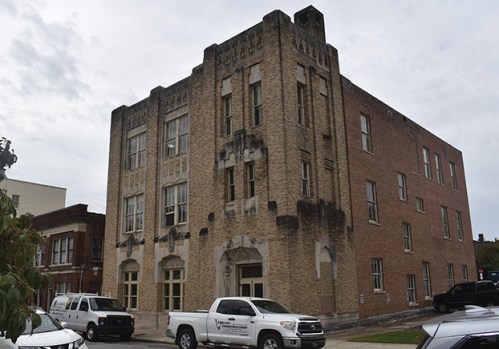 Built in the late 1920s, The Salisbury building served as Southern Bell's telecommunications center for several years. It has most recently been an office building, but will be redeveloped into a mix of one and two bedroom apartments. Ben Stansell/Salisbury Post 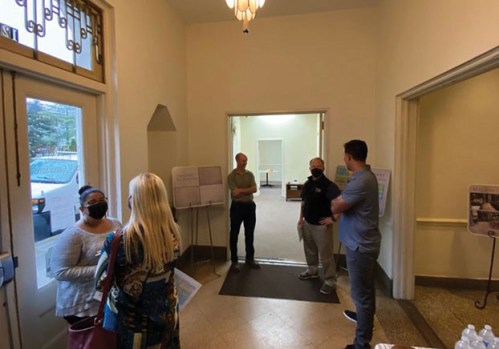 Before extensive renovations began on the building, Josh Barnhardt and Pete Bogle hosted an open house that gave people a chance to see what inside of the structure looks like. Barnhardt expects to have several apartments in the building finished by late spring. Ben Stansell/Salisbury Post 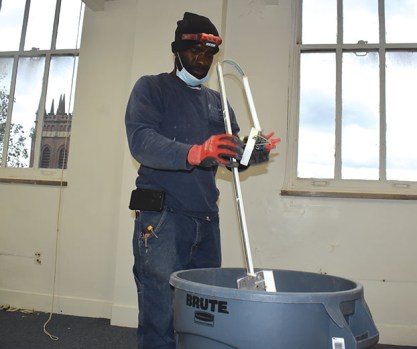 Brian Bennett with Lawrence Electric begins the process of cleaning up and cleaning out The Salisbury building at 121 W. Council St. The building is being redeveloped as 12 apartments by Josh Barnhardt and a group of architects and contractors. Ben Stansell/Salisbury Post

SALISBURY — A switchboard operator stationed at Southern Bell’s building in downtown Salisbury, Edith Thompson was at the nexus of telephone communication in Rowan County in the early 1940s.

Thompson started working the switches in the three-story West Council Street structure when she moved to town in 1940. She was in the building on Dec. 7, 1941, when the switchboard “lit up like a Christmas tree” with news of bombs being dropped on Pearl Harbor. She was also in the building on the day her future husband called in, eventually asking her on their first date the same day.

The stories of Thompson’s exciting and romantic experiences as an operator became family lore, passed down to her children and their children, including her grandson, Josh Barnhardt.

About eight decades after his grandmother worked in the building, Barnhardt of Iron Horse Development is now leading efforts to develop the 18,900 square feet office building into 12 apartment units.

“It’s pretty cool to renovate a building that (my grandmother) was a part of for many years during the war,” Barnhardt said.

The historic building located at 121 W. Council St. will be called “The Salisbury,” the name given to it when it was first constructed by Southern Bell in the late 1920s. Pete Bogle is providing architectural services for the project and Vertex Construction is helping out with the heavy lifting.

The building will contain six one bedroom and six two bedroom units varying in size from 650 to 1,100 square feet. Four units will be on each floor. The spacious basement will be turned into a workout facility for residents and climate controlled storage.

This isn’t Barnhardt’s first foray into a historic downtown residential renovation. He recently redeveloped the building at 112 E Innes St. that is now home to his family’s jewelry store on the first floor and a pair of apartments on the second.

“Doing the Lofts of Innes project above the jewelry store, I really enjoyed getting back involved in downtown Salisbury and saw the opportunity and demand for residential in downtown,” Barnhardt said. “With the park and the growth in Salisbury, I felt like it was great timing to go after another project.”

Barnhardt was also part of a group vying to redevelop the Empire Hotel on Main Street, but the project was awarded to a Charlotte-based developer in September.

The $3.5 million makeover of “The Salisbury” will officially start on Nov. 1, but Barnhardt gave the public a peak into the current state of the building when he hosted an open house on Thursday afternoon.

After grabbing a complimentary water and cookie (baked by Barnhardt himself), anyone from the public was free to wander through the building.

Previously occupied by a handful of businesses, the building as Barnhardt inherited it is a maze of white-walled office rooms, some completely vacant and others containing abandoned desks and filing cabinets. Jumbled electrical wires and small spots of water damage can be seen from broken ceiling tiles.

“It has not been touched since 1985 really, so this will be a complete renovation,” Barnhardt said. “We’ll gut it down to original concrete floors, ceiling, original windows and we’ll go in with everything new. We’ll have all new electrical, all new plumbing, all new HVAC, new flooring.”

Although there will be extensive renovations, Barnhardt said the goal is to preserve and accentuate some of the structure’s historic features such as doorhandles, chandeliers and windows.

The project will receive a boost in the form of about $150,000 in grant funding approved by the city of Salisbury from the National Park Service’s Paul Bruhn Historic Revitalization Grant program.

To give the building a new look while paying homage to its history, Barnhardt has recruited interior designer Carrie Frye to decorate the building’s common areas and apartments.

“She has done some of the most high profile projects around Charlotte, so we’re bringing in her team to add the interior design and to bring this back to the 1920s, Art Deco look,” Barnhardt said.

Barnhardt said the apartment building will have plenty of perks for residents. Rent will be all-inclusive, meaning that one fee will take care of utilities and other services. Parking spaces next to the building will be reserved for residents. In addition to the workout facility in the basement, Barnhardt said his team is exploring the idea of another “outdoor amenity space.”

“Amenity-wise it feels like it would really appeal to a pretty wide range of tenants,” Barnhardt said. “Having other apartments in downtown Salisbury, I’ve had a mix of empty nesters, folks looking to sell their home and live downtown for a few years and I’ve had some younger folks as well.”

Along with the building’s built-in features, Barnhardt believes its location will be a draw.

“It’s literally a block from the square, but it’s on a side street across from a 200-year-old church,” Barnhardt said. “It’s a nice quiet area that’s close to everything.”

The renovation will start on the third floor. Barnhardt said he is optimistic that the first units will be finished by late spring 2022, with the first and second floors complete in late summer of 2022.