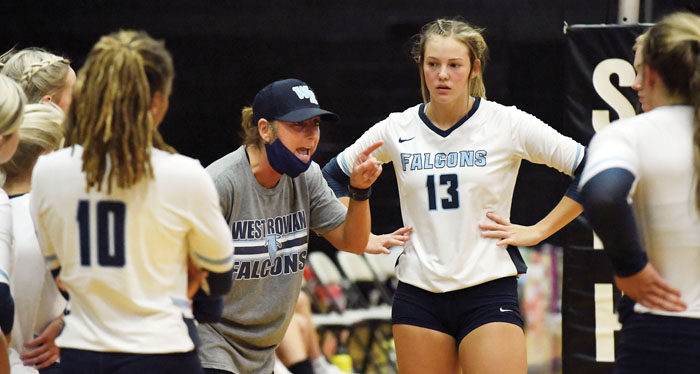 West's coach Jan Dowling urges her players on but it wasn’t enough Saturday. File photo by Wayne Hinshaw, for the Salisbury Post

MOUNT ULLA — West Rowan volleyball fans provided a standing ovation for the team as it left the court for the final time in 2021.

That applause was based on a marvelous 27-3 season, second best in school history, and lot of hardware for the trophy case, but the Falcons weren’t at their best on Saturday and got swept 25-18, 26-24 and 25-8 by Fred T. Foard in a 3A West Region semifinal.

“You’re always disappointed when you lose,” West head coach Jan Dowling said. “Sometimes you play your best and still lose to a great team and that’s what happened to us in the regional final in 2019 (vs. West Henderson). But sometimes you just don’t play well in a big game, and that was the case for us today. I thought we played intimidated, and you can’t do that. Make them earn the respect. Don’t just give it to them.”

Fred T. Foard (26-3) didn’t appear to be more physically gifted, but the Tigers were a lot sharper and made a lot fewer mistakes. They’d won 2A state championships the previous two seasons, so they’d been in plenty of pressure games in front of large throngs. They were ready for Saturday’s loud environment and dueling crowd chants and handled it better.

“They’re good and we knew we’d have to really play today,” Dowling said. “But then we went out and did things we haven’t done all year. We didn’t communicate. We were taking balls from each other and not trusting each other. Our kills to errors ratio today was terrible.”

Ashlee Ennis had three kills for West in the first set, but the last tie was at 3-all. The Tigers began pulling away when they scored three straight for a 9-5 lead. West used its first timeout at that point, but it didn’t help. It was 18-10 when the Falcons used their second one, and Fred T. Foard was able to cruise to a routine victory.

West had a hallway pep talk after being battered in that first set and reported back to the court with more energy. The blocking of Emma Clarke, Noe Gaeta and Anna Grace Blackledge got West going, and that got the crowd going. Then Kelcie Love started slashing kills. The Falcons appeared to have the set firmly under control at 22-18, but then they unraveled. Love had a kill for a 23-22 lead, but the only point the Falcons scored the rest of the way was on a missed serve by the visitors.

What hurt most was that Foard’s last three points for the 26-24 decision came on West errors. When that second set slipped away from the Falcons, everyone in the gym could see it was over.

“I could see on it on our faces and I could see it in our body language,” Dowling said.

The third set was lopsided. After the Tigers sprinted ahead 6-0, Dowling started subbing early and often.

“I wasn’t not going to let all my seniors play,” Dowling said.

Libero Brooke Kennerly had the strongest day for the Falcons. There were a lot of digs to make and she made some amazing ones. She had 26.

Love had a team-high nine kills.

Clarke had six kills and five blocks. She was great for most of the second set.

Ennis had six kills and 12 digs. Gaeta had 26 assists, 15 digs and three blocks.

But West didn’t have the number of digs that it normally accumulates.

West will have to look to the 2022 season, and the Falcons will lose a handful of seniors, including Love and Gaeta.

“Today wasn’t good, but that doesn’t mean it wasn’t a very good season,” Dowling said. “Twenty-seven wins, conference champs, fourth round of the playoffs. It was a great group of girls and a really fun team to coach.”

Worthy of a standing ovation.