Daisies for Daisy: Friends and family look back on Fink’s lifetime of service 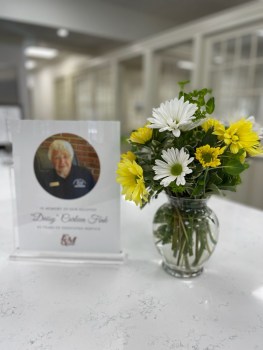 Daisies were in every F&M facility on Wednesday, the day of Daisy Fink’s funeral.. Submitted photo 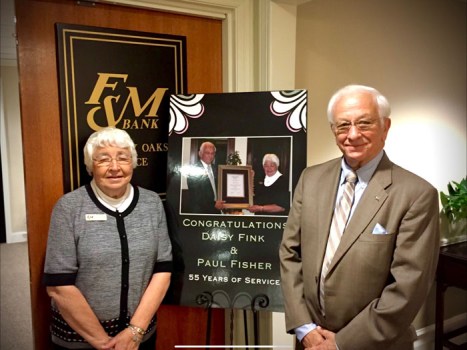 SALISBURY — In 1953, Daisy Carleen Fink first walked through the doors of F&M Bank. On Oct. 22 of this year, she locked the doors at the F&M branch at Trinity Oaks, where she’d worked since 2005.

She died early the next morning after suffering an aortic aneurysm.

In 2015, during the 10-year celebration of the Trinity Oaks branch, the late Paul Fisher said Daisy’s middle name (it was Carleen) ought to have been “service.”

He was exactly right.

No matter what branch she worked during her 63-year tenure with the bank, she led a life of service.

“Yes, she fulfilled a service as far as the bank,” Bill said Friday. “But basically, she was a friend to our residents. She often balanced their checkbooks, and she would sit there as long as it took. This is going to be a huge void for our residents.”

The branch was closed all last week and will reopen Monday morning with a familiar face — Daisy’s back-up.

“Daisy was serving people in a Christian way,” Bill added.  “She would let us know if residents were struggling.  Service has been her life. A lot of residents could relate to her because of her age.”

As a matter of fact, her son said, many residents thought they were younger than his 86-year-old mom, and she got a chuckle out of that.

Dwayne and his wife, Catherine, were in Asheville when they received a call to come home early Saturday morning. His brother Eric and his wife, Kris, came from the Columbia, S.C., area. By the time they got to the hospital, their mom was gone, but they all said their goodbyes.

“Walking out of that room is such a final thing,” Dwayne noted.

While much of Daisy’s life was spent at the bank, much of it was about her own family, too.

“She was so proud and supportive of her family,” Dwayne said, “and not just her immediate family. She was proud of our extended family and our friends.”

While one side of her fridge is dedicated to Dwayne’s son, Jacob, the other side holds photos of the rest of the family.

What you won’t find on that fridge, Dwayne said, was any pictures of his mom.

“It never was about her,” he said. “There was no self-promotion at all. She didn’t even care to be in a picture.”

Growing up, Dwayne said his mom was strict with him and Eric. “I know I tested her at times. We knew we had some strict parents. But despite that, we all congregated at our house.”

On Christmas Day, Daisy and husband Larry were to celebrate their 63rd anniversary. Dwayne is a retired teacher and coach, while Eric is a pastor.

Larry said she had just been talking about retirement the last couple of months — but couldn’t go through with it.

“She just absolutely loved it,” Dwayne said. “She’d say, ‘It’s time for me to go see my friends.’ She was flattered that folks trusted her and depended on her. She took it to heart that folks wanted her to be their banker. She was humbled by it.

“She couldn’t imagine not going to the bank to work.”