College football: Indians hang on for victory over Tusculum 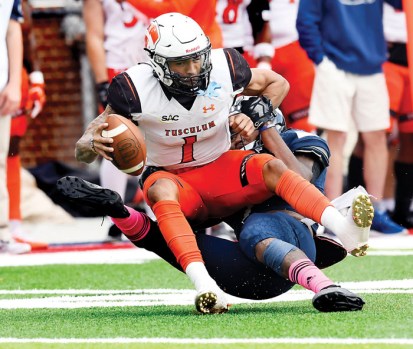 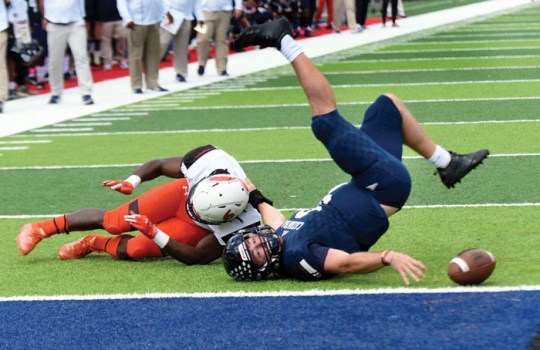 Catawba's QB Ken Avent 9 was tackled at the goal line by Craig Watts 5 and fumbled. The ref ruled that Avent was down before the fumble and is pointing to the one foot line while he was down. photo by Wayne Hinshaw 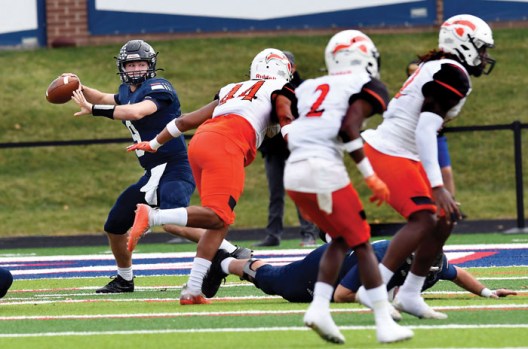 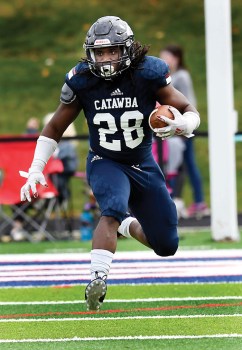 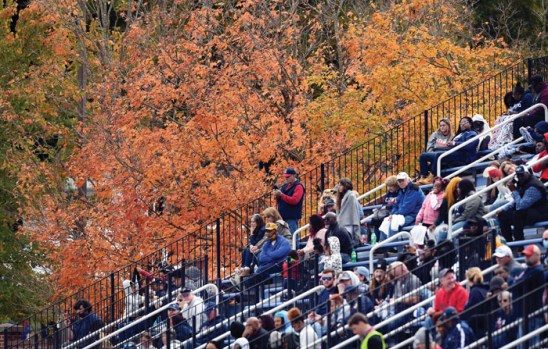 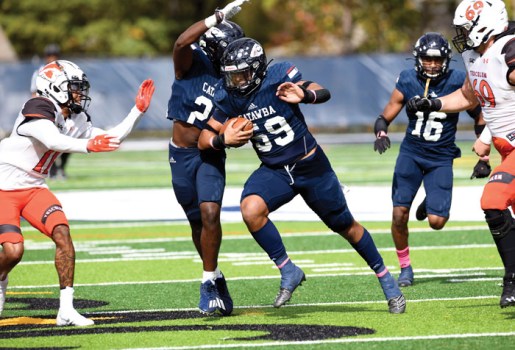 SALISBURY — Leading 21-0 after seven minutes and 31-7 at halftime didn’t guarantee anything.

Catawba’s football team managed to hang on to a 31-28 homecoming victory against Tusculum, but there were way too many anxious moments on Saturday afternoon.

“Yes, it does feel good to win again,” said Catawba head coach Curtis Walker, after the Indians stopped a two-game skid. “But I’ve been trying to calm our players down just now. We limped to the end today and that’s not the way we want to do it. We made it much tougher on ourselves than it should have been.”

Catawba defensive back Von Ramsey had to field an onside kick with 56 seconds left to ensure a South Atlantic Conference victory, but the Indians had the crowd roaring early.

They were close to perfect on both sides of the ball in the first quarter, forcing turnovers and then converting them into points.

“The homecoming crowd lit a fire under us at the start,” Catawba quarterback Ken Avent III said. “We got off to a crazy start that made us happy. But maybe we got too happy.”

Newberry and Mars Hill keyed on taking away Avent’s outside runs and beat the Indians when no one else was able to step forward  consistently. But freshman back Jyrea Martin was really good on Saturday, averaging 6.9 yards per carry and rushing for 159 yards. Martin normally shares the rushing load with Daniel Parker, but Parker went down early with a sprained ankle.

“We talked about 200 yards rushing always being a goal for Catawba football,” Martin said. “If we’re going to compete, we’ve got to run the ball. We got good yards on first down and stayed in good situations.”

Martin’s 3-yard scoring run just 58 seconds into the game gave the Indians a 7-0 lead. They flirted with disaster in the fourth quarter, but they never lost that lead.

“Our line collapsed everyone inside and I hit it outside,” Martin said.

Blitzing Catawba linebacker Jeremiah Ferguson caused a fumble with a quarterback sack and Christian Campbell recovered and hauled the ball 12 yards to the Tusculum 17.

“I rolled out and Rojas was so wide open I couldn’t believe it,” Avent said.

Izaiah Taylor’s interception set up the next Catawba score. Parker took it in from the 1 to make it 21-0 with 8:26 left in the first quarter.

With the aid of a running into the kicker penalty after Catawba had them stopped, the Pioneers scored to get back to 21-7.

But Avent connected with Kujuan Pryor, the Indians’ big-play threat, for an 81-yard score with 2:19 left in the first half.

“We just drew that one up based on something Tusculum was doing,” Avent said. “I just let it go and Pryor went and got it.”

D’verik Daniel’s interception led to a 47-yard Clayton Crile field goal to end the half and enabled the Indians to charge to the locker room leading 31-7.

“Turnovers are so critical,” Walker said. “When we won our first four games, we were plus-6 in turnovers. Then the two games we lost we were minus-5. We got back on the plus side today.”

But the second half still proved to be a tense adventure.

Tusculum’s switch to a new quarterback, mobile Tre Simmons, who threw two TD passes, made things more challenging for the Indians’ defense, and Catawba’s offense slowed down when it faced longer fields. It was 31-14 after three quarters.

The Pioneers (4-5, 2-4) sliced Catawba’s lead to 31-21 early in the fourth quarter.  John Oxce had a key fourth-down stop for the Indians, but another Tusculum score in the final minute made it 31-28, and had Walker and Catawba fans sweating.

“Personal fouls, a blocked field goal, a missed field goal, a holding penalty when we’ve got a clear path to the end zone,” Walker said. “It was a game we should have put away, but we made mistakes and we let them stay in it. We had to hang on.”

Catawba has had an unusual season that included two COVID cancellations. The Indians (5-2, 2-2) have won all five home games they’ve played, but they lost the two road games.

“We’ve done a great job of creating a winning environment at home,” Walker said. “But we’ve got to find a way to take that energy on the road.”

A home game against UVA-Wise is set for next Saturday.

Walker hopes the Indians learned some lessons from homecoming that will carry forward to the next challenge.

“We know we didn’t do what we needed to do in the second half,” Martin said. “This could have been a blowout.”