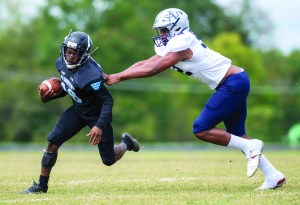 FAYETTEVILLE — Livingstone’s football team was held to 165 yards of offense by a fierce Fayetteville State defense on Saturday.

The Broncos secured the Southern Division championship with a 34-0 win over the Blue Bears (1-8, 1-5) at Jeralds Stadium and will return to the league championship game.

Lazarus Anderson completed 12 of 23 passes, but the Blue Bears only netted 84 yards through the air.

Livingstone ran for 81 yards against a Fayetteville State defense that came in ranked third in Division II in fewest yards allowed.

Jerome Bentley had a pick-six for the home team.

The Blue Bears will conclude their season next Saturday with the rivalry game at Johnson C, Smith.

The Golden Bulls beat St. Augustine’s on Saturday for their first win of the season.