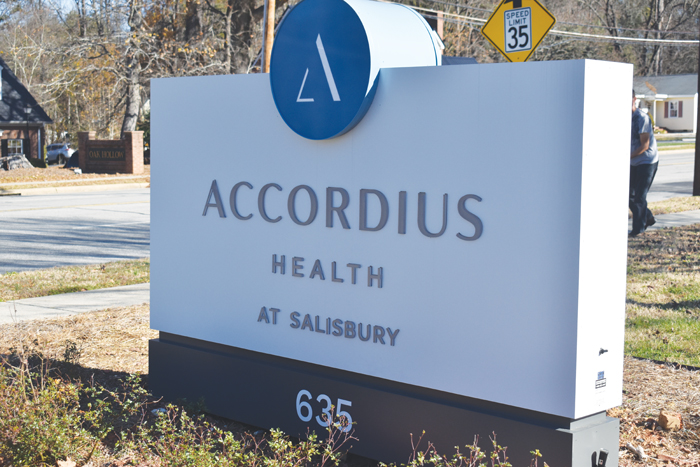 SALISBURY — An unannounced inspection at a Statesville Boulevard nursing home cited the facility for not effectively responding to a resident eating a mouse, physical altercations between residents and not notifying a family member about a resident’s positive COVID-19 test for seven months.

Accordius Health at Salisbury, a nursing home at 635 Statesville Blvd., was the subject of an unannounced inspection Aug. 11 through Sept. 3 because of 15 complaints. Five of the 15 were substantiated. Three were considered to be “immediate jeopardy” — when there’s a risk of serious injury, harm, impairment or death.

The nursing home is also part of a class action lawsuit involving 37 facilities owned by Portopiccolo Group. The Salisbury-based firm Wallace & Graham represents plaintiffs in the suit. In a statement, Mona Lisa Wallace, a partner at the firm, said the citations “are extremely disturbing not only for the residents of this facility, but also for the families with loved ones living in these conditions.”

“Unfortunately, these sort of citations almost always stem from underlying problems including chronic understaffing and lack of adequate financial support,” Wallace said. “The number one impact on resident quality of care in nursing home is staffing. During a time where COVID-19 continues to limit access to loved ones in nursing homes, it is crucial that these facilities comply with the North Carolina Residents’ Bill of Rights and increase transparency with those outside the facility.”

Representatives of Accordius Health could not be reached Thursday to comment on the inspection. The company operates the Statesville Boulevard nursing home and a second named the Citadel. That facility on Julian Road became the site of the largest COVID-19 outbreak in the state last year. 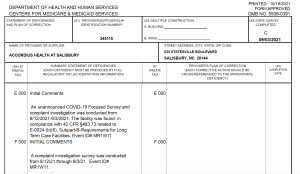 Click on the above image to view a full copy of the state’s inspection of the Statesville Boulevard nursing home.

The mouse-eating incident occurred Aug. 9. In an interview with inspectors from the N.C. Department of Health and Human Services, the director of nursing said she saw a male resident walking down the hallway with a styrofoam container in his hand and a dark-colored string a few inches long hanging out of his mouth. A social worker appeared to see the resident eat the mouse, telling state inspectors the man had the styrofoam container in one hand and “something else in the other hand.”

A nurse told state inspectors the mouse in the resident’s hand was moving before he ingested it. The resident swallowed the mouse and later vomited it.

Staff members told inspectors the resident was known for digging in trash, rummaging through cabinets and taking food from other residents’ meal trays.

State inspectors say Accordius Health at Salisbury staff failed to properly supervise the resident or assess him for any illnesses contracted from the mouse. The facility’s physician was told about the incident the morning after. The nurse practitioner called poison control on Aug. 12 and was told the resident should be monitored for symptoms such as fever, bleeding and bloody diarrhea, but the state report says she didn’t write orders to monitor for those symptoms.

The resident remains in the nursing home and hasn’t ingested any other non-edible objects, according to the state report. Corrective measures noted in the report include staff education about correct procedures and updating the resident’s care plan to note past incidents.

Corrective measures noted in the report included updating the care plan for resident No. 5 to include a history of aggression and reviewing nursing notes during morning meetings for any similar behaviors in case intervention is needed.

Another citation stated a resident tested positive for COVID-19 two days after being admitted to the nursing home, but a family member wasn’t notified about the positive test until Aug. 27. That was the day after a nurse was interviewed and asked whether she had notified the resident’s “responsible party.”

The facility also didn’t test for COVID-19 as frequently as its own policy and the Centers for Medicare and Medicaid Services require — once per week when the positivity rate is above 5% in the community. The state’s report found staff weren’t tested three of the four weeks in July. In late July, three staff members tested positive.

After an outbreak began at the nursing home, testing occurred twice per week.

On Sept. 3, the facility reported to state inspectors that just 25% of its staff and 67% of its residents were vaccinated for COVID-19.

The most recent state report is the second time this year complaints have found the nursing home not adhering to regulations. Two inspections last year found deficiencies, too.