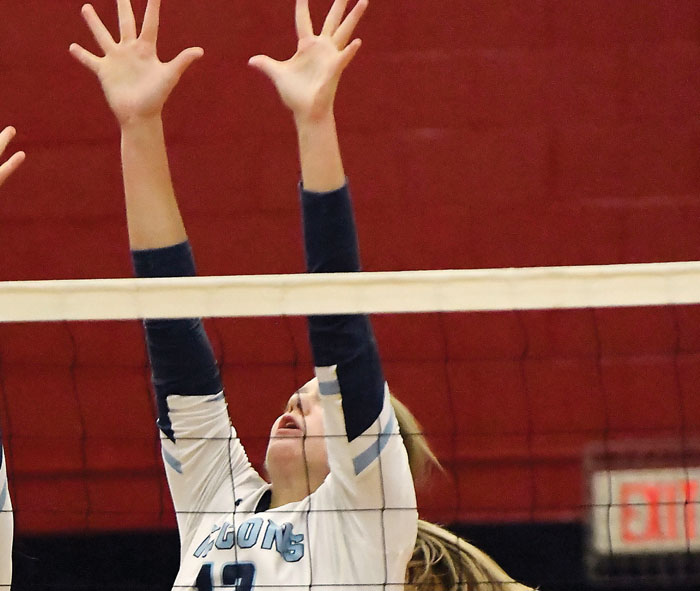 Emma Clarke, a 6-foot junior, has been involved with softball camps but should make an impact as soon as she turns her focus to the volleyball court. File photo by Wayne Hinshaw, for the Salisbury Post

It would have been nice if Clarke, a soaring 6-footer, had come up with 16 kills or 16 blocks, but she settled for 12 of the former and seven of the latter. While there were no 16s on the stat sheet compiled by assistant coach Emma Pope, it still was another terrific effort by Clarke. She helped West take care of the visitors 25-20, 23-25, 25-13 and 25-12.

While West setter Noe Gaeta, who had 40 assists, and big hitters Kelcie Love (13 kills) and Clarke destroyed North Henderson emphatically in the third and fourth sets, the surging Falcons’ 18th straight victory was not without anxious moments and adversity.

“We were very timid and it really ticked me off,” said West head coach Jan Dowling. “We’re out there tipping instead of hitting. We got away from playing Falcon volleyball, which is shove-it-down-your-throat volleyball.”

There was plenty of shoving in the third set.

“Now that third set, that was lights out,” said Dowling, who managed a small smile.

West  continued its aggressive behavior in the fourth. West jumped to a 9-1 lead in that one, and it was clear that it was over.

West was a different team in the last two sets. That was something everyone agreed on.

“We lost that second set and Coach Dowling really got on us and yelled at us,” outside hitter Ashlee Ennis said. “But we like having a hard coach. We got back to playing strong on offense, and Noe had a very good night setting.”

Blocks count one point, the same as a missed serve or a hitting blunder, but in girls volleyball, they’re like dunks in boys basketball. They’re crowd-igniters and momentum-changers.

Clark’s seven blocks created energy. Each of them propelled Brooke Kennerly, the libero who was covering behind her, into a fist-pumping, screaming celebration.

“I’m just glad we got it together after losing a set,” Clarke said. “Coach Dowling reminded us that we’re not just doing this for us. We’re doing it for the school and for the community. We had a great crowd and we didn’t want to disappoint them.”

By the third set, the Falcons had figured out the side from which North Henderson was going to attack. That knowledge translated into more frequent blocks and easier digs for Ennis (19 digs), Kennerly (19 digs), Gaeta (10 digs,), Clarke (8 digs), Kenadi Sproul (6 digs), Love (6 digs) and Anna Grace Blackledge (5 digs).

Gaeta added three blocks to her exceptional night. Ennis was all over the place again and had nine kills. Blackledge had five kills.

Henderson is a county known for its volleyball.

“They were good,” Ennis said. “No one makes it to the third round who’s not good. But we had it going.”

A month ago, West didn’t look like a team that could reach the Elite Eight in 3A and Final Four in the West,  but the Falcons have grown in confidence and cohesion.

The Falcons get to play at home again on Saturday.

(Newton) Fred T. Foard, which won the last two 2A state championships before moving up to the 3A ranks this season, will visit Mount Ulla. The Foard Tigers (25-3) outlasted No. 2 seed West Henderson in a five-set match on Thursday. Also advancing in the 3A West playoffs were North Iredell and Kings Mountain.