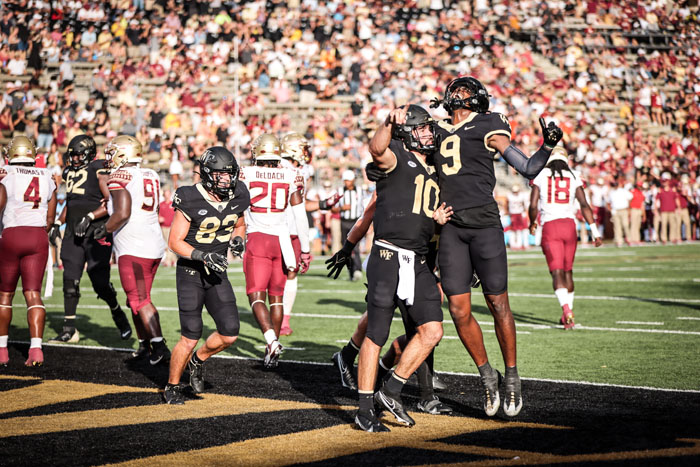 WINSTON-SALEM — Wake Forest’s offense is rolling along to power the 13th-ranked Demon Deacons’ push to win their Atlantic Coast Conference division. Duke is trying to find anything approaching that type of efficiency as October winds down.

The Demon Deacons and Blue Devils meet Saturday in the long-running instate series, with Wake Forest looking to stay unbeaten and Duke still looking for its first league win.

The Demon Deacons (7-0) have tied the program record from 1944 for their best start in any season, while they also have their first 4-0 mark ever in the ACC. They’re the league’s highest-ranked team in the AP Top 25 and one of nine unbeaten teams left in the country, fueled by an offense that ran at near perfection in last weekend’s 70-56 win at Army.

“You don’t win championships going 7-0,” receiver Taylor Morin said. “You don’t get rings on your fingers for winning seven games. It’s a marathon, not a sprint, so we’ve got to keep going and the focus this week is Duke.”

The biggest difference is how the teams take care of the football. Wake Forest has six turnovers, ranking fourth nationally in turnover margin (plus-10), while Duke has lost 14 turnovers in the same number of games.

Duke has sputtered since the start of league play, scoring seven points in a loss at North Carolina and suffering a 48-0 loss at Virginia in a four-turnover effort on Oct. 16 before the open week.

“We have a lot of guys that want to win, a lot of guys that are talented enough I think as a team to go out and win games,” Duke quarterback Gunnar Holmberg said. “I think at the end of the day, we’ve got to kind of look at ourselves and see what we’re doing wrong.”

Some other things to know about Saturday’s Duke-Wake Forest game:

But the teams didn’t play last year for the first time since 1967. Their November meeting was postponed and eventually canceled due to COVID-19 concerns for the Demon Deacons.

Wake Forest quarterback Sam Hartman is a fourth-year sophomore, and that experience is showing so far.

Hartman threw for a career-best 458 yards with five touchdowns in the Army win to keep the chains moving and stay in front of an Army offense that could lean on its option-based running game to work on the clock with a lead. Hartman helped Wake Forest score all those points in just 17:17 of possession time.

Hartman has thrown for 19 touchdowns with three interceptions while completing 65.3% of his passes.

Jaquarii Roberson had eight catches for 157 yards and three touchdowns in the Army win, while A.T. Perry continued his season-long rise with six catches for 146 yards and a score — his fifth straight game with a TD catch. And it comes at a position that lost projected top target Donavon Greene to a season-ending injury.

The matchup to watch will be Duke’s Mataeo Durant against Wake Forest’s run defense.

Durant is ranked fourth nationally by averaging 124.3 yards per game, including a program-record 255 yards in the season-opening loss to Charlotte. The Demon Deacons rank 119th in FBS by allowing 207.7 yards rushing. That includes 416 in last week’s matchup against Army.

Duke isn’t afraid to lean on Durant, either. He had a program-record 43 carries in the loss to Georgia Tech earlier this month, and the open date has given him a chance to regroup physically.

North Carolina State regrouped quickly from its first loss. The Wolfpack must do it again Saturday night against Louisville, even as injuries could make that job tougher this time around.

N.C. State (5-2, 2-1 Atlantic Coast Conference) is coming off a 31-30 loss at Miami in a mistake-prone performance that knocked Dave Doeren’s team out of the AP Top 25 after a four-week stay in the rankings. It also saw the Wolfpack lose a fourth defensive starter to a season-ending injury.

Yet the loss doesn’t change the fact that N.C. State controls its own destiny in the Atlantic Division race to reach the ACC championship game, a fact Doeren brought up then reiterated twice more to start the week.

“I know a lot of fans were disappointed, upset, whatever you may say about the loss we just had,” Doeren said. “And so were we, more than you. But we still have it all in front of us.”

The good news for Doeren is N.C. State followed its first loss at Mississippi State with four straight wins, including a double-overtime win  against six-time reigning ACC champion Clemson.

Louisville (4-3, 2-2) is coming off a division win against Boston College and must win Saturday to stay in the hunt in the Atlantic race headlined by No. 13 Wake Forest (7-0, 4-0). The Cardinals follow this game by facing Clemson as part of a critical three-game stretch.

“We told our team, kind of where we’re sitting in within the ACC standings, there’s still a great opportunity in ACC,” coach Scott Satterfield said. “We take care of business Saturday, then we’re sitting in second place on our side.”

Some other things to know about Saturday’s Louisville-N.C. State game:

Louisville quarterback Malik Cunningham ranks 15th in the Bowl Subdivision ranks in total offense (309 yards per game). He’s coming off a huge performance against BC on the ground (133 yards, three TDs), which had followed two strong passing games (579 yards, three TDs, no interceptions) in the previous two games.

The Cardinals rushed for a season-best 331 yards against Boston College, their highest total since Nov. 23, 2019 against Syracuse. That total included a career-high 112 yards on 13 carries by freshman Trevion Cooley, but the highlight was Cunningham’s perfect option toss to Jalen Mitchell for 33 yards to set up Mitchell’s 5-yard TD run two plays later.

The little-used play spokes volumes about Louisville’s O-line play behind the league’s No. 4 rushing attack (201.0).

That added him to a list that includes all-ACC linebacker Payton Wilson, nose tackle C.J. Clark and safety Cyrus Fagan, another hit to a unit ranked 10th in FBS in scoring defense (16.7) and 11th against the run (93.1).

“It does hurt the team quite a bit just knowing the impact those guys have on the field for us,” safety Devan Boykin said. “But unfortunately we can’t get those guys back so it’s next man up and we’ve got to get it done.”

Louisville’s four turnovers against Boston College snatched some of the luster from last week’s win. The Cardinals are even this season in turnover margin.

“We obviously don’t want to turn the football over,” Satterfield said. “This will be a huge game for us to be able to take care of the football.”

N.C. State is in the midst of playing four out of five on the road. Saturday night’s visit from Louisville marks the Wolfpack’s only home game in a 47-day span before visiting Florida State next week and Wake Forest on Nov. 13.

To Kelly, the Tar Heels (4-3) are a sleeping giant. Ranked No. 10 in the preseason AP Top 25 and a favorite to reach the ACC title game, North Carolina already had three losses before edging Miami 45-42 two weeks ago.

“Look, it’s about winning football games,” said Kelly, whose team has won two straight since losing at home to No. 2 Cincinnati. “On any given night (when) this team (North Carolina) puts it together, they’re as good as any team we’ve played this year. It’s a talented football team.”

Start with 6-foot-1¼, 225-pound junior quarterback Sam Howell, who has completed 61.1% of his passes for 1,851 yards and 18 touchdowns and has added 493 yards and five touchdowns rushing for the Tar Heels. Then there is a veteran offensive line, running back Ty Chandler (588 yards and seven TDs) and sophomore wide receiver Josh Downs (60 receptions, 837 yards and eight TDs).

That could be too many goblins to handle for the Irish defense, which is fifth nationally with 17 turnovers (11 interceptions, six fumble recoveries) but will be minus junior All-America free safety Kyle Hamilton because of a knee injury.

Last season, North Carolina and Notre Dame were tied 17-all at halftime before the Irish defense dominated the second half for a 31-17 victory.

“They were more physical than us,” Brown said.

The Irish struggled early this season running the football, but now a jelling offensive line has produced 350 rushing yards and five touchdowns in the two recent victories, including 219 yards and three scores by running back Kyren Williams. The Irish also have gone up-tempo on offense behind two quarterbacks, Jack Coan (63.2% completions, 1,397 yards and 11 TDs) and Tyler Buchner plus a talented group of receivers led by sophomore tight end Michael Mayer.

While at Texas, Brown coached in the 2003 Hula Bowl and was assisted by Kelly, then the Grand Valley State head coach Kelly. Among current FBS coaches, the pair have a combined 63 years as head coaches, have coached in 777 games (Saturday will be Brown’s 400th) and stand 1-2 in victories (Kelly 279, Brown 263).

“He was just a great mentor to me as a young coach,” Kelly said.

Notre Dame defensive end Isaiah Foskey, who has eight sacks this season, remembers how difficult it was to get to Howell last season.

“They had some big O-linemen and Howell was tough to bring down,” said Foskey, who managed one of Notre Dame’s six sacks in last year’s victory. “He’s running more this year, and it’s always a challenge going against a running quarterback.”

If Howell throws for 300 yards, he will pass North Carolina career leader T.J. Yates (9,377 yards). He already is the leader in career passing touchdowns with 86.

“I feel like I kind of have a fresh start after the bye week,” Howell said. “I feel really good about the improvements I made from a health standpoint.”

In the last two victories, the Irish have settled on tackle Joe Alt and guard Andrew Kristofic on the left side of center Jarrett Patterson, right guard Cain Madden and right tackle Josh Lugg.

“It took a bit longer than we may have expected,” the 6-foot-4¼, 295-pound Kristofic said. “But we have a group of guys who are extremely dedicated to getting better every day.”

Kelly indicated Thursday that Hamilton is making progress from his knee injury but still won’t play. Hamilton has spent the week working with backup rovers Isaiah Pryor and Xavier Watts, who are being asked to back up Hamilton’s replacement, DJ Brown.

“Not being able to play changes your perspective,” Kelly said. “He’s learning about himself. When you’re a captain and you’re not playing, you still have to leave something at the end of the day on the field. For him, it’s leave some knowledge. He’s done a really good job.”