Students take a trip into the past at the Roller Mill 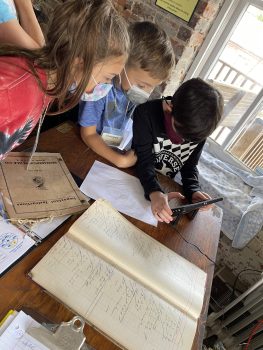 Photo submitted - The Roller Mill is a historic site on Main Street in China Grove maintained by Rowan Museum. 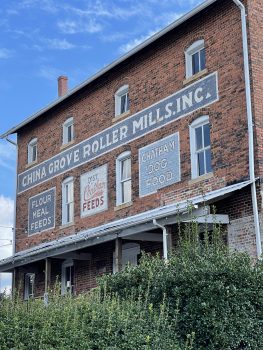 Photo submitted - The Roller Mill is a historic site on Main Street in China Grove maintained by Rowan Museum.

Roller Mill Camp started on Oct. 13 with a train rolling past that would be part of the day’s story before the activity moved to a game of “guess the decade” as instructors modeled period clothing from different eras. The biggest hit was Tricia Denton Creel’s 80’s outfit complete with neon shorts over tie dye leggings.

Amy Pruitt posed the question: “What is a roller mill?” She then walked and talked them through the process. Farmers brought the grain and took home flour and feed for their animals. Terry Holt introduced flour sacks that would be converted to clothing. That clothing was washed using a washboard. The children experienced using a washboard and bucket. It was all fun until they learned diapers were cloth and had to be hand washed as well.

Holt, dressed in a Beatles’ wig and blue wire rimmed glasses, told the kids a railroad spike was used to hold down tracks and reminded them about the train that just went by.

“This auger that drills through wood goes all the way back to Archimedes and Ancient Greece,” he told the kids.

The biggest hit for pieces of equipment the students saw was a spinning weasel, which made a pop sound when the desired length of yarn was measured.

Marching tunes played as the students started making bread. The recipe was read, ingredients were introduced and hands shot up when Pruitt asked, who likes to cook.

While the doughy mixture was left to rise for yeast rolls and bread, the students walked to Goodman’s Farm Supply. Formerly the company store, it had a close relationship with the roller mill. There were sleigh bells, bags of animal feed and fishing poles.The store carries feed for about ten different animals. Curly mustard seed was selected for planting.

Back at the mill, hands were rewashed and the dough was punched down, pinched into rolls and the other half baked whole. While the lunch table was set, the aroma of baking bread filled the room. Each student took home two pans, one with yeast rolls and another with bread, still warm.

The kids looked at photos from the past. They showed things like fence building, wood splitting and animals. The students learned about Lassie, a popular television dog that became an even more popular dog name.

Even story time was related to mill life with “The Little Red Hen.” Their favorite lines from the story were the repeating ones, “not I and she did.” They wore animal masks acting out the story that became relatable.

The students took home an exploratory science kit that included spools, string, paper, mesh and clips to create their own pulley system modeling the mill. They plan to snap a picture of their challenge and send their final product to the museum. The train rolled by as the students left with their arms full and their imaginations challenged.