Sports obituary: Former South pitcher ‘Rudy’ Brown was one of the best 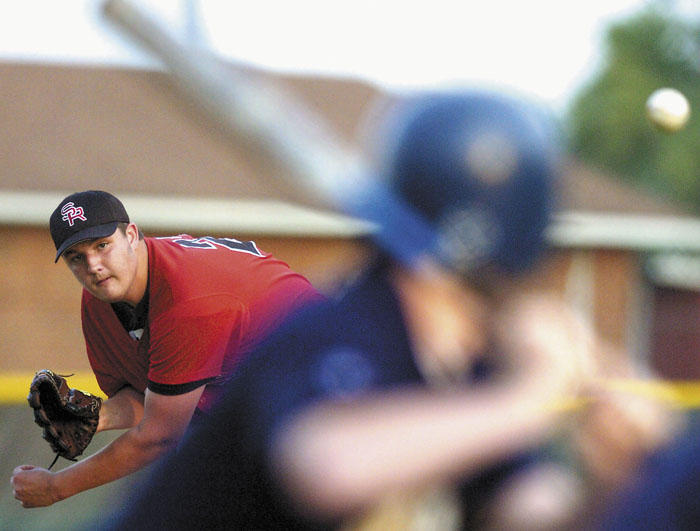 ‘Rudy’ Brown, at 6-foot-5, was an imposing lefty when he pitched for South. He’s seen here in 2006. File photo by Brett Clark/Salisbury Post

CHINA GROVE — To say it’s been tough times for the baseball community in the southern part of Rowan County is an understatement.

Zacharay “Rudy” Brown, a former teammate who was a like a brother, had passed away.

Wright, a cancer victim, was only 51.

Brown, a terrific pitcher who made it to the pro ranks against long odds, died from COVID at 33.

He was a family man, married to former softball star Kayla Kelley. They had three young children. A fourth is on the way.

Brown is remembered fondly by those who coached him and played alongside him.

“Rudy was a very high charisma guy,” Basinger said. “Always joking and smiling. He had this great attitude. He brightened up every room he ever walked into.”

Brown is not remembered as fondly by those who stepped into a batter’s box to face him. He was left-handed, 6-foot-5, big and intimidating, and his pitches moved like crazy.

He was as affable and easy-going as it’s possible to be most days, but his personality changed when he strode to a pitcher’s mound.

“Rudy was just this big kid with a big heart, a kid who loved baseball,” said Linn Williams, South Rowan’s head coach when Brown pitched for the Raiders. “But Rudy also was a competitor. When he got on the mound, he took it personally.”

The baseball road was long and winding for Brown. He was lucky to have Williams, Legion coaches Wright and Kenny Simpson, and Thad Chrismon, who was South Rowan High’s pitching coach during Brown’s time at South, in his corner.

All those coaches recognized Brown’s baseball tools before he did. They encouraged the fun-loving kid to get in better shape, to take things more seriously. Gradually, Brown started to dig a little deeper.

Between his sophomore and junior years at South, Brown made strides. He still had a ways to go, but he’d taken the first steps.

“We go to West Forsyth, and they’re always loaded and they’ve got this great offensive team,” Williams said. “Rudy pitches a shutout (for five innings) and we 10-run rule them. After that, we always felt like we had a good chance whenever Rudy pitched.”

Opening day of the 2006 season provided another glimpse of Brown’s potential. South hosted Mooresville. Brown didn’t get a decision, leaving the mound with the game tied 1-all, but he struck out 11 in four innings. He went on to have a 5-3 season.

Brown graduated from South in 2006.

There was a tense night on the road against a powerful Kannapolis team that would win the Area III championship. Kannapolis sent up an all-star lineup against Brown, just about all right-handed, and couldn’t do a thing for seven innings. Catawba College star Ryan Query finally beat Brown with a homer in the eighth. Kyle Seager, the lone lefty in that Kannapolis lineup, went 1-for-5.

There was another setback when Brown came out on the short end of a 1-0 duel against Mocksville ace Jonathan McDaniel. That one was over before it got dark.

South opened the playoffs against Lexington at Holt-Moffitt Field against a stout team whose lineup started with two future UNC Tar Heels. Brown went nine innings, allowing five hits and one run. He struck out 18 batters, a feat what would stand as the program record for South Legion.

Then Brown went back to the mound a few days later, threw more eight innings and won a decisive Game 5 to give South a stunning series victory.

“He’d learned some of those lessons that we try to teach through baseball. He’d done the school work and was doing things the right way. We knew he had a chance to be a dominating pitcher, to take college games over. We were all so proud of him.”

Basinger roomed with Brown at Surry.

“Rudy was starting to think more about the future then, and he was really working to get better,” Basinger said. “By then, he was throwing in the low 90s.”

In the summer of 2007, Brown still had Legion eligibility and took advantage of it. And he was no longer that guy who wanted to set records for being the most laid-back. Now he was the vocal leader of a good team. He was a better fielder. He had a better pickoff move. He’d discovered a changeup.

He was instrumental in South’s 26-14 season as a monster two-way player. He batted left-handed, but he could hit to the opposite field and took advantage of South’s friendly left-field dimensions. He batted .364 with 10 homers and 34 RBIs. He won six games on the mound, striking out 86 in 80 innings and posting a 2.79 ERA.

The 10 homers that summer gave Brown a share for the all-time record at South. The 86 strikeouts were a season record for the program.

The South program folded after the 2015 season, but Brown will be remembered as one of the best to put on the South uniform.

After Surry, Brown moved on to UNC Pembroke for two solid seasons. He was a good student and earned a degree in Sports Science.

“My best memory of Rudy is when he came by to see me years after he graduated from South,” Chrismon said. “He came to tell me that his coaches had been right, and he wished he’d figured it all out sooner. But the important thing is, he did figure it all out. Rudy got it, and it made me feel good as a coach when I saw the very admirable young man that he had become.”

Brown wasn’t drafted in the summer of 2010, but he still wanted to pitch. The 22-year-old was playing out in the M.I.N.K. (Missouri-Iowa-Nebraska-Kansas) League when a Kansas City Royals scout spotted the big southpaw a week after he’d been ignored in the draft and signed him.
Brown got in the best shape of his life, trimming down from 255 to 225. He learned to throw a slider.

He played for Royals farm teams from 2010-12 and was excellent. He relieved in 59 minor league games and was 6-4 with three saves. He struck out 127, while walking 29. He allowed three homers in 121 innings.

He played that 2012 season for the Kane County Cougars, 35 miles west of Chicago, and even though his curveball was still bewildering hitters, he knew it was time to come home.
He missed the hunting. He missed his friends.

Brown gave back to the game as a pitching coach at Northwest Cabarrus and offered pitching advice and expertise to youngsters of all ages.

Brown’s son and Basinger’s son already were playing together on the youth baseball fields in China Grove, proof that life comes full circle.

But sometimes it ends way too quickly.

Brown’s former teammates have organized the 4Rudy Project to help Brown’s wife and children with the mortgage, with expenses and to provide for the children’s education.