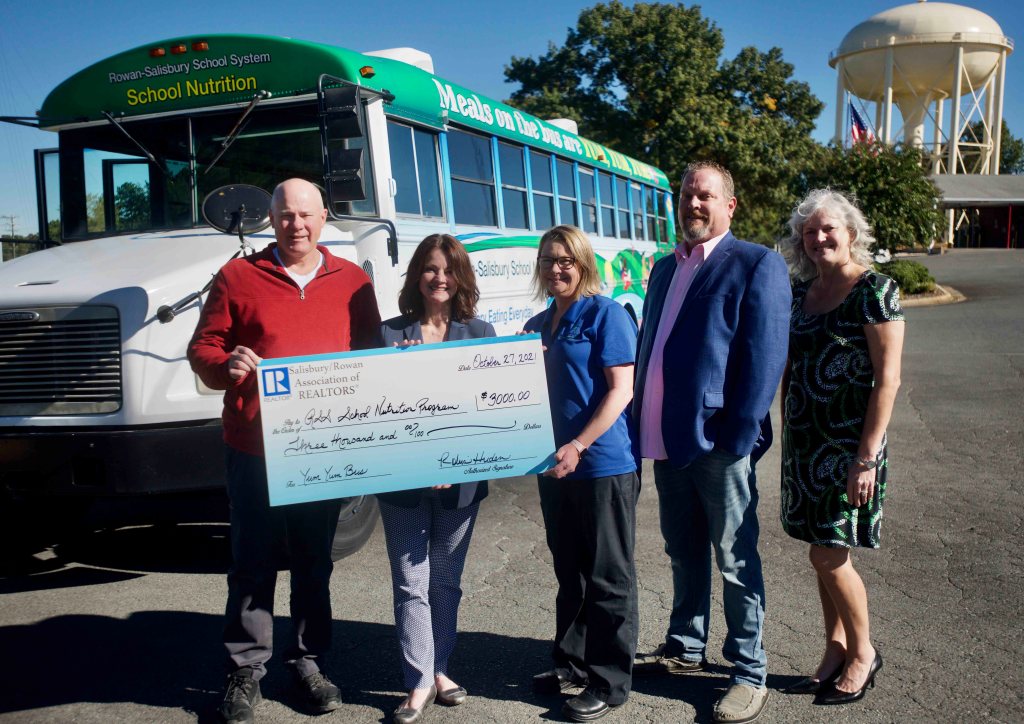 SALISBURY — Lisa Altmann, nutrition director for Rowan-Salisbury Schools, was surprised when she was handed a $3,000 check on Wednesday morning.

The amount was twice the donation the department had received last year from the same fundraiser held by the Salisbury/Rowan Association of Realtors. The fundraiser, in its fourth year, takes the form of a golf tournament held at The Revival.

Salisbury Rowan Realtors CEO Carla Rose said the event involves more than just real estate agents, and the sponsorships received are all part of what makes the event and donation possible. The fundraiser also collected a few hundred books to donate as well.

The entire donation is going to the district’s Yum Yum Bus program, which takes converted, decommissioned school buses out into communities during the summer. Kids can get on, eat a meal on the air-conditioned vehicles and read books.

Altmann said the Yum Yum Buses are her favorite part of her work for RSS, and the book donation is a great help. She said the program collects books whenever it can, and staff members dig into their own pocket books for books sometimes.

When a child wants to keep a book to read, she has a hard time telling them “no.” The buses need a steady supply.

Realtors association chair Robin Huden said the book collection is a new addition to the fundraiser and the intention is for the books to be given out to students.

“We really like to give back to the community,” Huden said. “We appreciate all the community does for us. This is where we earn our living and where we live.”

Huden said the hope is for folks who come out to the tournament to get a bit of education on the bus program, too. One of the buses was stationed at the tournament.

“A lot of people every year don’t even know what it is or have never heard of it,” Huden said, adding she hopes participants come away from the tournament knowing local schools are supporting youth, trying to improve their lives and keep them healthy.

Altmann said the program has two buses at the moment. She is writing a grant trying to get a third on the road. The district’s nutrition workers also are working to get meals to students enrolled in Summit Virtual Academy. Yum Yum Buses may be the solution.

During the summer, there is an opportunity for 10-month employees to keep working with the summer meals program. Altmann said she intentionally puts staff members in the areas they work during the regular school year because they know the kids well.