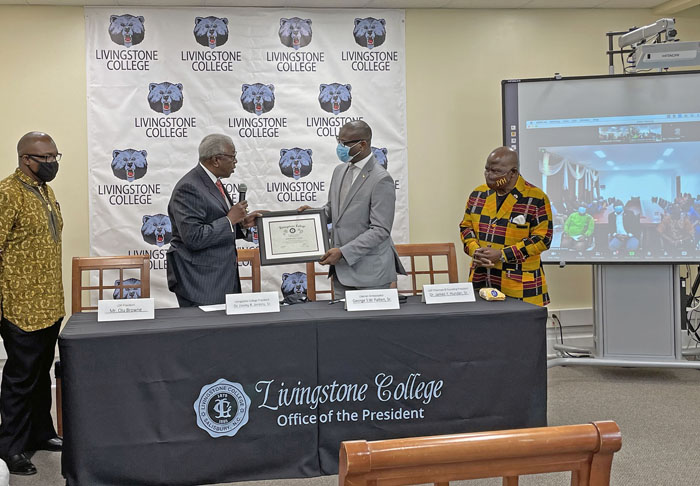 Natalie Anderson/Salisbury Post — Livingstone College President Dr. Jimmy Jenkins presented Liberian Ambassador to the U.S. George S.W. Patten Sr. with a full scholarship for Emmanuel Tuloe, a teen from Liberia who made international news after returning $150,000 he found while riding his motorcyle taxi. Livingstone College and Liberia have a longstanding history through founding denomination A.M.E. Zion Baptist Church and the Liberian Organization of the Piedmont, based in Winston-Salem. Tuloe and his family joined the presentation virtually on Wednesday, Oct. 27.

SALISBURY — Livingstone College on Wednesday granted a full scholarship to a Liberian teenager who became a national hero after returning tens of thousands of dollars to the rightful owner.

Emmanuel Tuloe, 18, was driving his motorcycle taxi in northeastern Nimba County in Liberia when he discovered $50,000 in U.S. dollars and 100,000 Liberian Dollars wrapped in a plastic bag on the road. Tuloe’s aunt held onto the money until he was able to return it to Musu Yancy, a business owner who made a request to return the money over the radio later that day. Christopher Fahn, a reporter in Liberia, first reported the story.

Tuloe’s story gained international attention, with President of the Republic of Liberia Dr. George Manneh Weah visiting Tuloe at his home last week. Tuloe told Weah his desire was to finish his education after having to drop out in the seventh grade to operate a motorcycle taxi service to support his family. Weah and his family personally offered a scholarship for Tuloe to attend any school of his choice in Liberia, along with $10,000 and two new motorcycles. The owner of the money also provided Tuloe with cash and materials valued at $1,500, including a mattress he plans to give his grandmother.

On Wednesday, Tuloe and his family virtually joined Livingstone College President Dr. Jimmy Jenkins and other staff, the Liberian Organization of the Piedmont in Winston-Salem and the Liberian Ambassador to the U.S. George S.W. Patten Sr. to accept a full scholarship from the school. Tuloe plans to complete high school before enrolling in college in Salisbury, but Livingstone’s offer is good whenever he’s ready. Tuloe said he plans to study engineering.

Livingstone, a historically Black college, has a long history with Liberia through its founding denomination A.M.E. Zion Church and through its collaboration with the Liberian Organization of the Piedmont, located in Winston-Salem. Each year, Livingstone College sponsors two Liberian students every four years.

Patten praised Tuloe for his selflessness and integrity, adding that not many young people would have returned the money like Tuloe did given the hardships experienced in Liberia.

Jenkins said after reading the international news reports of Tuloe’s actions the school decided to offer the scholarship as “education is the surest beacon for upward mobility in the world.”

“He could’ve easily said, ‘Well, that’s pennies from heaven,’ and kept that money and moved on … to keep it for the family in some way,” Jenkins said.

Dr. James Hunder Sr., founding president of the Liberian Organization of the Piedmont, said Tuloe’s actions are something everyone should emulate.

Citing Psalms 22:1 in the Bible, LOP President Olu Browne said Tuloe’s gesture proves that “a good name is better than many riches.”

“I understand that even during this time of giving and gifts, things can also be difficult because this is a new thing for you and it’s challenging in some area or another,” Browne said. “So we are praying for you that one day that you’ll be able to join us on this side as you continue to work hard and complete your schooling to be able to bring you to this point and be able to share in with the Livingstone blue bear family.”

Tuloe extended his gratitude to God, his family and all those in attendance Wednesday for the support.

Mayor Karen Alexander and Rowan County Commissioners Vice Chair Jim Greene were in attendance and praised Tuloe for his integrity and the example he’s set for young people in America.

“(Tuloe’s) actions fit beautifully into the model that Dr. Jenkins has as his mission for this school and its students,” Alexander said. “As I was taught, it is those moments when we do things that nobody else knows about, but we make that decision, that’s when we’re showing God’s presence in our lives. And I want to uphold that today because I think that is what is missing from so much of our culture today, that sense of obligation to do what is right when no one else is looking.”