‘It all comes back to community’: Rowan United Way three-fourths of way through campaign 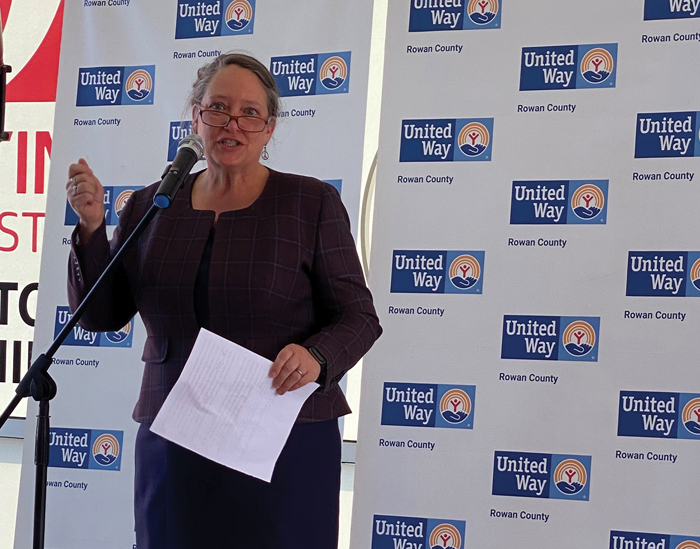 SALISBURY — Three-fourths of the way through its campaign, the Rowan County United Way is at 56.3% of its $1.5 million goal, the nonprofit reported Wednesday.

Gathering at Gerry Wood Kia, attendees heard from Rowan County Social Services Director Micah Ennis and the campaign’s chief fundraisers, who said the total so far is $845,207.90. The number is split almost evenly between payroll deductions committed by employees of participating businesses and people who have contributed a sum of money independent of an employer.

The miscellaneous and presidents divisions are furthest from their goal — at 25.5% and 34.3%, respectively.

Ennis spoke during Wednesday’s report meeting about the importance of giving to the United Way and encouraged people to keep giving.

“For me, it all comes back to community,” Ennis said.

Ennis spoke about growing up in Kannapolis, seeing women at churches making arrangements for food or childcare when someone was sick or injured, neighbors taking up money for another neighbor in need or people going out of their way to give a friend or acquaintance a ride to work.

“That’s community, and that’s what sums up the Rowan United Way for me,” she said. “We are community-led, community-focused. By the people and for the people is how I see Rowan County communities.”

Ennis described people who are scared and embarrassed to seek help at the Rowan County Department of Social Services. Because not everyone can be helped by the government agency, Ennis said her department makes a lot of referrals to Rowan County United Way-funded groups.

“We are blessed to have the resources that the Rowan County United Way funds. So, let’s keep the tap on,” Ennis said in a reference to this year’s campaign theme “Let it come. Let it go. Let it flow.”

“Let’s keep the resources flowing because our neighbors in our community are counting on us,” Ennis said.

To learn more about the Rowan County United Way and its fundraising campaign, go to rowanunitedway.org.