High school football: Rowan rivals clash, but can any underdogs shock the world? 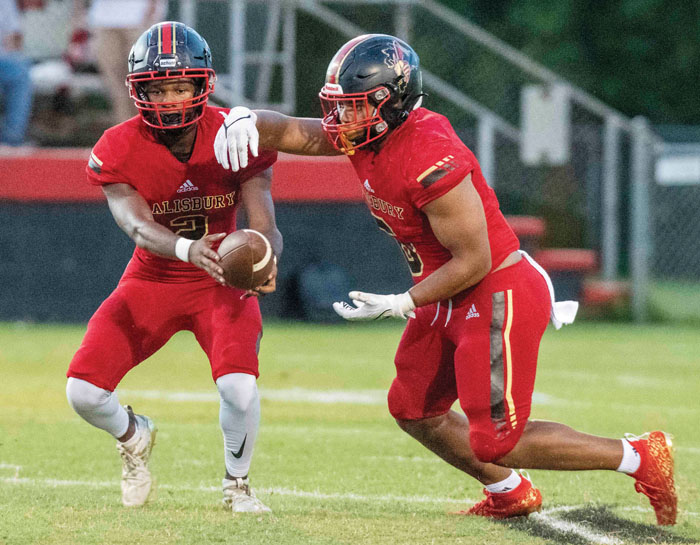 Quarterback Mike Geter is back along with running back JyMikaah Wells, who will be looking for more yardage when Salisbury starts the season with a new coach. File photo by JON C LAKEY / FOR THE SALISBURY POST. 9/17/21, Salisbury,NC.

SALISBURY — The final Friday of the high school football regular season will be chock full of rivalry games, but will any of them be close?

North Rowan has a good team, but Salisbury has a devastating one, so the Cavaliers’ trip to Ludwig Stadium likely won’t go well.

If the Cavaliers can score 17, hats off to them. Salisbury’s defensive line has been unblockable up to this point. As good as North’s skill people are — and they are extra good — the Hornets should own the line of scrimmage.

As far as West Rowan at East Rowan, the Mustangs did win last week for the first time, but they are still 35-point underdogs against West Rowan. East has a win probability of 1 percent, according to the Massey Ratings.

It also should be noted that the Massey Ratings had West thumping Concord last week. You probably remember how that one turned out.

The Massey Ratings are good, and they’re fun, but they’re obviously not infallible.

Carson vs. South Rowan is normally a decent rivalry scrap, but it’s hard to see anything strange happening in this one. Carson obliterated East Rowan not long ago. East beat South last week.

South has lost eight in a row, while Carson has won two in a row. Those trends seem very likely to continue. Carson is a 19-point favorite.

South is given an 18 percent win probability by the Massey Ratings, but that seems optimistic.

Davie will be in the playoffs, but the regular-season finale for the War Eagles against a powerhouse Glenn team may not be much fun. Surprisingly, Davie is only a 12-point underdog.

Concord at A.L. Brown looks like the best bet on the slate to provide serious, down-to-the-wire drama.

Concord has been underrated all year. That continues this week. The 3A Spiders, who have won six in a row, are 12-point underdogs against the 4A Wonders, who have lost five of their last six, some of them to pretty average squads.

How good has Salisbury QB Mike Geter been?  He’s thrown only 69 passes all season, but he’s completed 47, with 13 going for touchdowns. Geter has rushed 57 times for 493 yards and has 17 rushing TDs.

Salisbury back JyMikaah Wells has rushed 88 times for 806 yards and he also has 17 rushing TDs.

As good as Salisbury’s offense has been, anyone will tell you that the defense is even better.

Thanks to lousy strength of schedule numbers, the Hornets are only 11th in the 2A West RPI rankings, but it won’t be any fun playing them in the playoffs.

North lost to Thomasville (big), but will be playing for a conference championship.

North has sensational individuals on offense. Freshman quarterback Jeremiah Alford has thrown for 1,383 yards and 15 touchdowns and has run for 10 touchdowns.

Salisbury’s advantage will be upfront. No one’s been able to hang with the Hornets so far.

It’s been a tough season for the Raiders after the excitement of winning on opening night against Parkland.

Carson, which has developed some serious efficiency with its veer offense, is going in the other direction and might even squeeze into the playoffs with a win Friday night.

South has been shut out three times, and Carson’s defense and special teams came up with four turnovers last week to help beat Central Cabarrus.

The Cougars lead the all-time series 10-4 and have won the last four meetings.

South beat Carson 19-16 in 2016, and that was the last time the Raiders beat a Rowan opponent. They’ve lost 17 straight county games.

East is coming off the emotional high of its first win, while West is coming off a deflating loss at Concord in  grinding battle for the South Piedmont Conference championship.

The mental aspects may even things up some, but this is still a mismatch on paper.

West has been a prolific offensive team and a pretty solid defensive team, as well.

In last week’s 36-22 win against South Rowan, the Mustangs had their best offensive showing, by far, and they’ll try to keep it going in their finale.

Davie appears to be a lock for the 4A West playoffs, no matter what happens.

Glenn is ranked sixth in the state by the Massey Ratings and is the favorite. Glenn’s losses have been to Chambers and East Forsyth (in three overtimes), two of the state’s best.

It’s an unusual non-conference game to end the regular season, but the schools were able to work out the scheduling, with the Wonders playing in a seven-team 4A league and with Concord playing in an eight-team league that has only seven members playing 3A football.

Concord won a humongous game with West Rowan last week for the SPC title, but in some respects this game is as big or bigger.

Times have changed and the programs have gone through their ups and downs, but the level of bragging rights and community pride at stake when the old rivals clash for “The Bell” is still through the roof.

Concord has run the option extremely well against SPC foes, but the Wonders may provide more of an obstacle.

The Wonders’ offense has been sporadic and could struggle against an excellent Concord defensive line.

It looks like a low-scoring struggle that won’t be decided until the final minutes.

The series has been as even as any long-running series can be. The Wonders, who started a six-game winning streak against the Spiders in 2015, lead 44-43-4 in regular-season games and they also won two of the three playoff scraps in the 1990s.

Concord is headed to the playoffs, obviously, but the Wonders, who are 39th in the 4A West RPI rankings, might be wrapping it up.