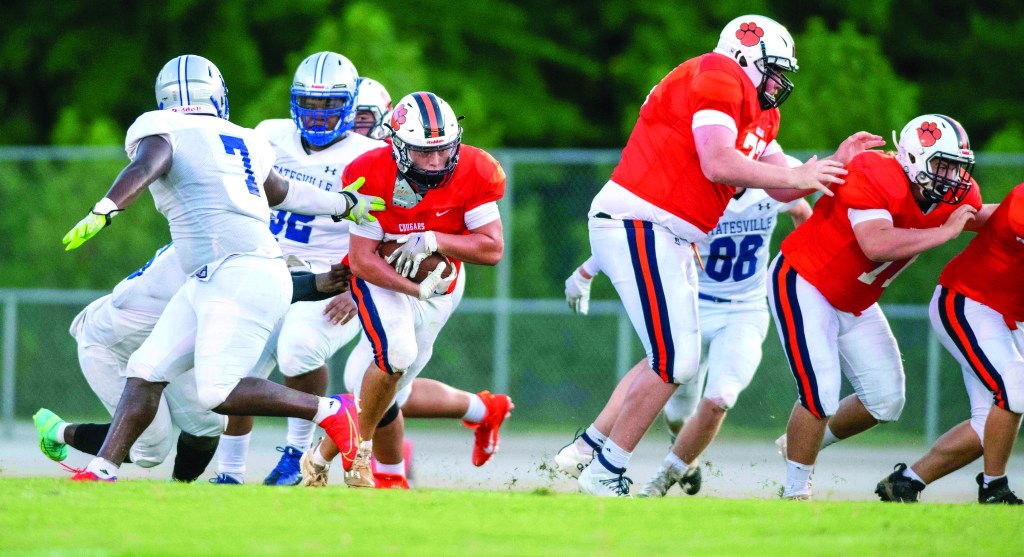 Carson’s Carter Dowd (36) follows the lead blocks of linemen as they move defenders out of the way. File photo by JON C LAKEY / FOR THE SALISBURY POST. 8/20/21, China Grove,NC.

CHINA GROVE — Hard-nosed Carson back Carter Dowd is someone more likely to break ribs than ankles.

If Carson was a boxer, it would be Rocky Balboa. Carson is coming right at you on the ground, throwing punches.

The Cougars broke the 11-year-old school record for rushing yards in a game with 479 in Friday’s 35-20 South Piedmont Conference win at Central Cabarrus.

They led only 7-6 at halftime, but the Cougars took over in the second half.

“Low, hard and fast,” said huge senior right guard Coby Sandusky. “That’s what we talk about all the time, and we’re getting better at it.”

Carson threw the ball three times at Central and ran it 69 times. In the second half, all 41 Carson snaps were running plays.

“When you go to an offense like this, that’s the vision,” Carson head coach Daniel Crosby said. “Take your opponent’s will. Finish the game.”

Carson began this season with massive rushing yards against Statesville and South Stanly.

But the Cougars hit a midseason stretch in which they played Robinson (8-1), West Rowan (5-3) and Concord (6-2) on consecutive weeks. Carson didn’t get much done offensively against those teams.

“Those three teams are very good on defense, and they’re especially good on the defensive line,” Crosby said. “We hit some roadblocks.”

Instead the Cougars got better at what they were doing. Execution improved, penalties declined, and as the schedule lightened up some, success returned.

“We trusted the process,” Sandusky said. “Get those 3 or 4 yards on first down and keep it moving.”

“We’re very confident in what we’re doing now,” added senior left tackle Cole Carmack. “We know we’ve gotten better because we’ve had our best practices over the last month. We’re going into games prepared to execute — and then we’re executing.”

Crosby helps coach the offensive line, and Barry Mitchem a veteran OL coach who was the head man at West Davidson for many years, has returned to the field after a brief retirement. Mitchem is a lovable father figure, an encourager. Crosby provides the tough love when necessary.

“The offensive line always gets the least attention, and they also get coached the hardest,” Crosby said. “It’s not an easy job.”

That’s nine guys whose job is to make sure Dowd, Burris and Galarza have some running room, even when opponents know exactly what’s coming.

Burris is capable of breaking long ones and has carried 122 times for 783 yards and nine touchdowns, sensational QB rushing numbers for eight games.

Dowd, who plows defenders like an angry bull, has carried 123 times for 617 yards and 10 TDs. Galarza has 81 carries for 387 yards and four scores.

“Dowd always keeps his feet moving,” Carmack said. “It’s fun when he gets it because he’s cracking some heads. We see that in practice every day.”

There were some incredible Dowd runs in the Central Cabarrus game. He’d appear to be stopped, but then the pile would slowly start creeping forward again.

“It’s not unusual to see a pile to move a few yards now and then,” Crosby said. “But on Friday, Dowd had several 10-yard pile moves — with our offensive linemen doing their part.”

For the offensive linemen, games like Friday’s, are the reason they play the game.

“Legs churning and piles moving,” Moore said. “I loved all of it. It’s rewarding when what you’re doing is working the way it did for us on Friday. Being physical and being able to take it to the opponent and wear them down, that’s a great feeling.”

Burris couldn’t make a bad decision on Friday. Whichever of his three options he chose, it worked.

Carson threw the ball about 17 times per game last spring. The biggest rushing night the Cougars had was 231 yards.

The switch to the veer was mostly personnel driven. Carson graduated throwing QB Alex London and also lost all the starting receivers, either to graduation or decisions to focus on other sports.

This season has meant different roles not only for former cornerback Burris and Dowd, but for the offensive line, which has transitioned from protection mode to aggressive behavior.

Carmack and Sandusky are returning starters upfront. Moore also is experienced. He saw action at several different positions in the spring.

“I’d say our offensive line is the area where we’ve improved the most from the spring to now,” Crosby said. “Being in a two-point stance and retreating in pass protection is a totally different mindset for an offensive lineman from getting in a three-point stance and firing off the ball. The last few weeks have been a lot of fun for our linemen. They’re communicating better and they’ve been getting after it.”

Carson started turning the corner offensively in the 36-30 loss at Northwest Cabarrus on Oct. 8, a game that could have gone either way. Then the Cougars stampeded East Rowan and Central Cabarrus.

Cohesion and timing are everything for an offensive line.Carson has put in the work, and now it’s paying off.

“Low, hard and fast” is no longer a slogan. Now it’s a reality.

While Carson is only 3-5, it will be favored to win its third straight when it takes on rival South Rowan on the road on Friday. Carson hasn’t put together a three-game winning streak since 2016.

The Cougars might get in the playoffs if they beat South. Carson’s RPI ranking was 36th in the 3A West this week and 32 teams will make the bracket.