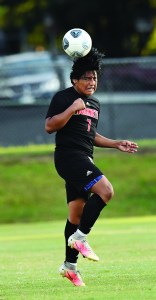 Salisbury’s soccer team  closed out the regular season with a 3-0 non-conference victory over Gray Stone Day on Wednesday.

It was scoreless at the half.

Brayan Avilez continued to work his way back to full strength and scored twice, both on assists from Colin Donalson.

Donaldson scored the third goal on an assist from David Austin.

With RPI determining seeding, every match played on Thursday   factors into final numbers, so every game potentially alters the seeds.

Brackets are supposed to be finished Friday — or Saturday — for the first round which begins on Monday.

Porfirio Ruiz scored three goals to lead Carson to a 9-0 win against East Rowan on Tuesday.

Michael Guiton had a rushing touchdown and threw a touchdown pass to Collin Ball.

Nacier Parker threw a touchdown pass to Jason Brown for the Raiders.

Larry Petrea shot a 1-under 70 for low gross, while  Cress won low net.

Three eagles were made.

The South Atlantic Conference has three teams in the Southeast Regional  women’s rankings.

Catawba came in at No. 2, with Queens checking in at No. 3. Lenoir-Rhyne earned the No. 6 spot.

The Catawba Indians are ranked No. 8  in the United Soccer Coaches Division II National Poll with a record of 13-0-2 overall.

Montevallo rallied for two second-half goals to top Catawba 2-1 in men’s soccer action on Wednesday afternoon at Pacer Pit on the campus of USC Aiken.

Catawba (7-6-2) opened the scoring in the first half. Malik Wilkes chipped a ball into the far post in the 26th minute.

Catawba placed 17th out of 17 teams at the Flagler Fall Slam Women’s Golf Tournament, which concluded up on Tuesday at the 6,062-yard, par-72 Marsh Creek Country Club.

Emily Wellspeak was the top Catawba finisher. She was 48th with a score of 162.