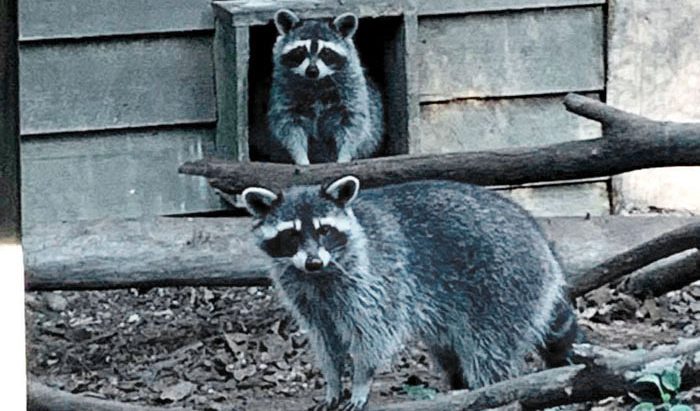 Three raccoons held in captivity at Dan Nicholas Park were euthanized this month after a wild raccoon that tested positive for rabies broke into the enclosure. Submitted file photo

SALISBURY — Three raccoons held in captivity at Dan Nicholas Park were euthanized this month after a wild raccoon that tested positive for rabies broke into the enclosure.

The wild animal broke into Rowan Wild’s main raccoon enclosure the night of Oct. 4. When staff arrived at the small facility connected to Dan Nicholas Park in the morning, they found the wild raccoon was dead, had breached the enclosure and was entangled in fencing.

Rowan Wild Naturalist Megan Cline said the invading raccoon was a juvenile and, while not wanting to divulge the details of the encounter with the captive raccoons, said their exposure was “undeniable.”

The invading raccoon was tested for rabies, which can only be done by sampling brain tissue. It tested positive. The three raccoons that lived in the enclosure, Knox, Memphis and Nash, had to be euthanized. They were tested for rabies as well out of concern for the safety of staff. None of the raccoons tested positive, and Cline said that was likely because of the brief period between exposure and testing.

The facility still has one raccoon, Roxy, who has neurological issues and is kept in a separate enclosure.

Cline said there is no approved vaccine for captive raccoons. The only accepted procedure after exposure is euthanasia.

“All of the animals that fall into rabies vector groups, you just don’t know and can’t take that chance,” Pendergrass said.

Vector species include raccoons, foxes, skunks and bats in the United States.

The state does operate a federal wildlife oral vaccination program in some counties. This involves dropping baits containing packets of vaccine material from aircraft. These vaccines are intended for raccoons, but this program is intended for wild populations.

A 2020 article in the scientific journal Nature, notes the oral vaccine is “highly effective” in foxes and raccoon dogs, an East Asian mammal, they seem to be less effective in other species for unknown reasons.

Cline said the facility takes precautions like requiring staff to be vaccinated before entering enclosures as well.

Cline said the raccoon break-in was a first for her at the facility. The facility was hopeful there would be a different end result.

Rabies is among the most deadly diseases on the planet. While human cases are rare in the United States due to control and effective post-exposure vaccination, it kills all but a small number of people it infects. It is preventable after exposure with a proper course of vaccines and immunoglobulin.

Rowan County has only identified a handful of rabies cases this year. Those include the raccoon at Rowan Wild, a fox on Honeycutt Road, a fox on East Ridge Road and a bat.

The foxes both got into fights with dogs and the bat was found dead but handled by someone.

“Any case is bad,” Pendergrass said.

He said rabies typically transmits through a bite, but it can spread through other contact, and people should seek advice if they believe they have been exposed. They can contact the Rowan County Health Department, Animal Services or a doctor.

Even if a domestic animal has been vaccinated, Pendergrass said it will be required to quarantine for 10 days after a bite. If a pet is not vaccinated, he said that is a serious risk for the pet.

He also cautioned feeding wild carnivores. He recounted the story of one woman who fed a group of feral cats. One cat bit a neighbor, and the cat tested positive for rabies.

“That means all of those cats she was feeding were potential cases,” Pendergrass said.

Pendergrass also cautioned to never touch a bat. They are mobile, a vector and may carry a different strain, but the main rabies vectors locally are foxes.

Cline said the animals at the facility are like family to the staff, and the loss has been hard.

“At some point we, yes, we will fill that space,” Cline said. “With what species, or who, we don’t know just yet. Going into the winter it gives us a little bit of time to think about what we want to do with that habitat.”