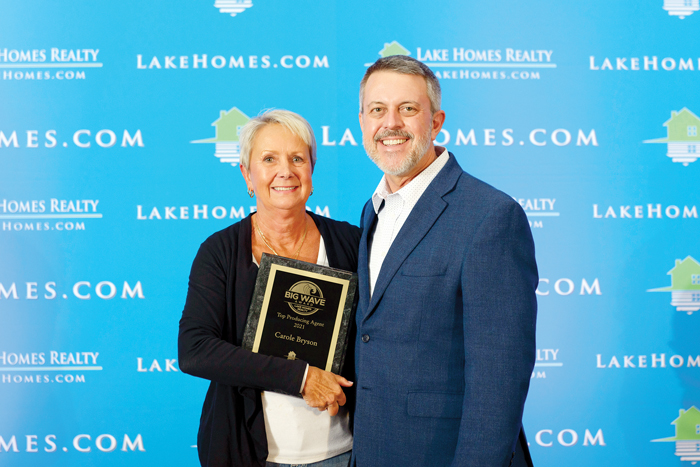 Carole Bryson (left) with Lake Home Realty CEO Glenn S. Phillips at the company's annual summit. Bryson is holding her award for being a top producing agent in 2021. Photo submitted.

HIGH ROCK LAKE — Like Realtors across the country, Carole Bryson expected the market to plummet at the onset of the pandemic.

“In 2020, we thought the market was just going to crash with the pandemic in February and the first part of March,” Bryson said.

She was shocked when the total opposite came true and the market was suddenly buzzing.

“It just took off,” Bryson said.

Bryson, who specializes solely in property on and around High Rock Lake, saw the demand for waterside living outpace anything she’d seen in her two decades in real estate.

“I tripled my business in 2020 and probably about the same in 2021 because of the influx of people from other states,” Bryson said. “It’s just been incredible.”

The mad dash for High Rock Lake property led to the most successful year in Bryson’s professional career. From Sept. 2020 to Aug. 2021, Bryson produced a transaction volume of over $10 million. The staggering total earned her the Big Wave Award from Lake Homes Realty. Bryson also earned  the “Premier Agent” designation, which names her among the brokerage’s top producers.

The Birmingham, Alabama based company is the nations largest lake-focused real estate company and has agents representing lakes across the state of North Carolina. Bryson traveled to Alabama earlier this month to accept the award at the company’s eighth Annual National Agent Summit.

“Carole continues to impress with her hard work and dedication, year after year, and we are proud to present her with this major award,” Glenn S. Phillips, CEO of Lake Homes Realty, said in a news release. “The Big Wave Award is one of our company’s most prestigious honors.”

Bryson and her husband, Chuck, moved from Texas to the Rowan County side of High Rock Lake in 2015. The move was precipitated by a job offer for Chuck, who works in information technology at Delhaize, but it meant a slight career shift for Carole. Instead of selling custom built homes in a single large development, she trained her gaze on lakefront property.

“The biggest thing I had to do was learn the lake, what it’s about,” Bryson said. “The rules for the lake, what you can build, what you can’t build, if you have a private pier versus a shared pier or no pier at all, the water depth you have to have for putting a pier in. Other than that, it’s really no different.”

Boasting 15,000 acres of water and 360 miles of shoreline, High Rock Lake is the second largest in North Carolina. The man-made lake is currently managed by Cube Hydro.

Bryson initially covered Lake Tillery and Badin Lake as well, but started focusing only on High Rock Lake when the market began to heat up. She joined Lake Homes Realty in 2018. Bryson sells both homes on and around the lake and undeveloped lots.

The High Rock Lake market was strong before the pandemic, Bryson said, but nothing could’ve prepared her for the tidal wave of interest brought on by COVID-19. Suddenly, homes were going for well over their asking price with multiple competitive offers and would last for just a few days on the market.

“I’d be on the phone at night, phones would be ringing first thing in the morning on top of showing property everyday and doing listings,” Bryson said. “It was a really busy time and I don’t think I could do that another two years.”

The avalanche of offers on homes, Bryson said, came from buyers who suddenly could work from anywhere or those who decided to start retirement early. The majority of purchasers, Bryson said, were people moving to High Rock Lake from other states. Buyers were moving south from New York, Pennsylvania and Ohio and others were coming north from Florida.

One of the few Realtors focused solely on High Rock Lake, Bryson managed the mayhem by herself. She’d planned to hire an assistant before the pandemic started, but didn’t have time to find and train one once the market caught fire.

The High Rock Lake property market has remained ablaze in 2021. According to one of Bryson’s multiple listing services, over 70 waterfront homes have been sold in the past six months. The average days on the market is 28. The average price of the homes is over $500,000. The cheapest house sold for over $200,000 and the most expensive went for $1.35 million.

The only reason the market has cooled slightly, Bryson said, is because there’s now a shortage of inventory. With a lack of already built homes up for sale, Bryson said her clients have started looking for empty lots for new construction.

“I’ve sold more lots this past year than I’ve sold in five years and it’s because people couldn’t find a house,” Bryson said.

When it comes to predicting the future of the High Rock Lake market, Bryson is hesitant to venture a guess.

“I can’t tell you what the market is going to be in six months or eight months because I sure couldn’t have forecasted 2020 and 2021 the way the market went,” Bryson said. “That was not foreseeable at all. I think worst case scenario is it gets back to what it was in 2018, 2019, which is it’s going to take longer to sell a house than it did this year and you won’t have multiple offers.”

Now that the market’s pace has somewhat slowed, Bryson has enjoyed a few spare moments out on the lake with her husband. She also likes to visit North Myrtle Beach when she can.