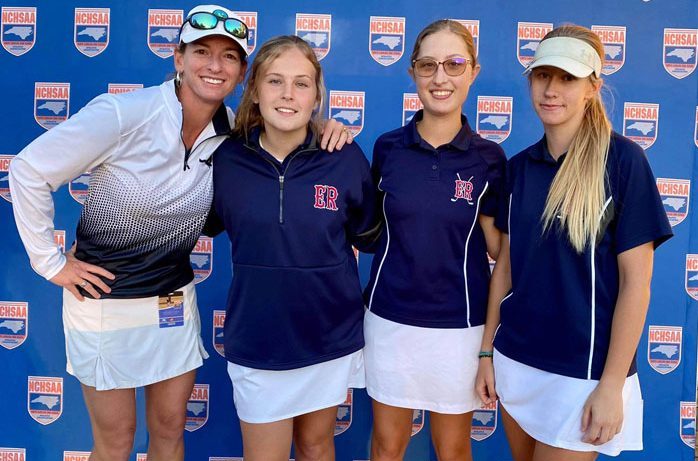 JACKSON SPRINGS — The scores weren’t what they wanted or what they’re used to, but East Rowan’s girls golf team placed fourth in the 3A State Championships.

“We spent a lot of time at the beach,” sighed East Rowan coach Tinsley Merrell, referring to the numerous sand traps on the Grey Course at Foxfire. “It’s a great course. It’s also a tough course, but it’s state. State is supposed to be tough.”

East was still in contention after Monday’s first round, which included some early rain, sitting seven shots behind Fike, the first-round leader and eventual champion.

But Tuesday proved even more challenging for the Mustangs, with the wind picking up. They fell out of contention early in the day.

Waddell made a birdie and five pars on Tuesday.

“The state tournament, playing 36 holes in two days, that’s a mental and physical grind,” Merrell said. “There were jitters and nerves and all that, but the girls stayed in it. They competed.”

East’s season included a host of accomplishments. Not only did they get to play on the last day of the season, the Mustangs won the Rowan County Championships, the South Piedmont Conference Tournament and the 3A West Regional Tournament.

“That regional championship was an amazing accomplishment and I don’t think anyone had that on their radar for East Rowan,” Merrell said. “The state wasn’t nice to us, not as far as the scores, but we had an incredible experience. We walk away from it with a top-four finish and I couldn’t be any prouder of these girls or our season.”

Eastern Alamance’s Emily Mathews shot 3-under 69 to win her second straight individual championship. She shot 3-over 75 in the first round.

(Wilson) Fike was the winning team, holding off Union Pines by three shots. Rockingham County was third, with East fourth. East finished at 168-over, 35 shots behind Fike and 24 back of Rockingham County. East held off Triton by two strokes.

SOUTHERN PINES — In the 1A/2A State Championships held at Longleaf, Gray Stone’s Katelyn Griggs was the individual champion with rounds of 74 and 79.

Griggs shot 9-over for the tournament in windy conditions and became the program’s first golf champion. The junior held off Hayesville’s Madison Logan by three shots.

Gray Stone finished fourth in the team scoring at 124-over and was 20 shots behind Newton-Conover.

She shot 48 on the back nine on Tuesday. She made a birdie and three pars.

Reagan won 4A for the third time in four years.

Morgan Ketchum shot a 7-under 65 on Tuesday to break the state tournament record.