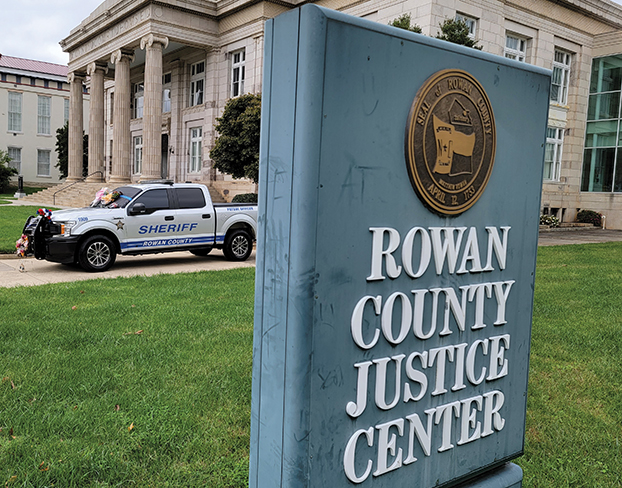 Josh Bergeron / Salisbury Post - The Rowan County Sheriff’s Office stationed William Marsh’s patrol vehicle outside of the Rowan County Justice Center on Monday following his death over the weekend from COVID-19. His car was decorated with flowers, a thin blue line flag and other mementos.

SALISBURY — When the Rowan County Sheriff’s Office holds a fundraiser Wednesday to benefit the family of Master Deputy Billy Marsh, passersby may notice the beginnings of beards on some deputies.

The Sheriff’s Office will have a sausage sandwich and hotdog fundraiser on the front lawn of the courthouse on North Main Street, with all proceeds from food and drinks going to the family of Marsh, who died Oct. 10 after contracting COVID-19. The fundraiser starts at 7:30 a.m. and lasts until 2 p.m.

Meanwhile, the B Squad Patrol Division is challenging the entire department to grow beards to help raise money for the family. Marsh worked for B Squad, one of four in the Sheriff’s Office. The challenge requires $100 per month from beard-growing officers. All participating deputies can grow a “Beard for Billy” through the end of the year.

“This worthy cause is to ensure that the Marsh family has what they need to get them through the rest of the year,” states a flyer at the side entrance to the courthouse. “Throw away those razor blades and give till it hurts.”

While some law enforcement agencies have relaxed guidelines to allow deputies to grow facial hair, the Rowan Sheriff’s Office typically does not allow it for most deputies. So, the fundraiser’s flyer says supervisors are keeping a list of participants to ensure no beards are grown without “coughing up the cash.” Marsh’s wife, Nicole, will judge the best beard at the end of December.

Talking about the fundraisers on Tuesday, Lt. K.L. Myers, who was Marsh’s supervisor, said, “Any time any law enforcement family is in need, we come to help.”

Marsh was 40 when he died at Novant Health Presbyterian Medical Center. He was first hospitalized for COVID-19 on Sept. 30.

He started working for the Sheriff’s Office in 2012 as a reserve deputy and became a full-time deputy in 2015. He lived in the Cleveland area and is survived by his wife and 2-year-old daughter Kennedy.