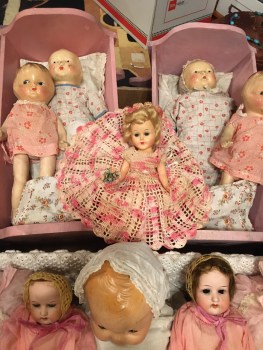 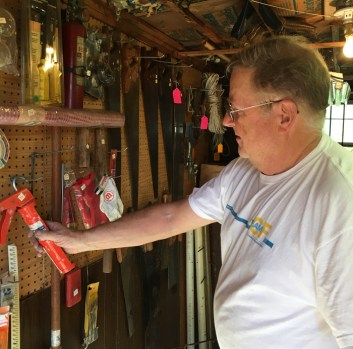 Rich Cosgrove sets up items in one of the five outbuildings for the sale. Submitted photo 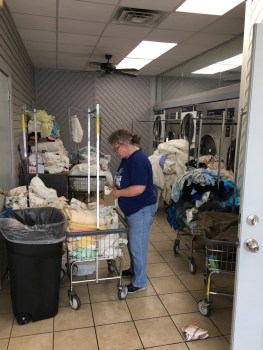 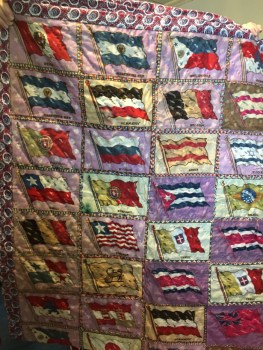 A quilt made from flannel tobacco flags. Submitted photo 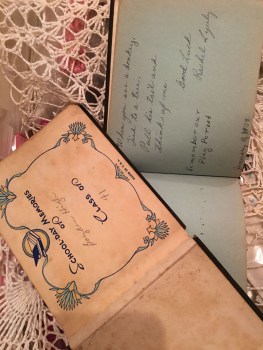 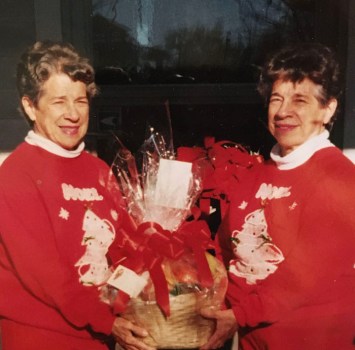 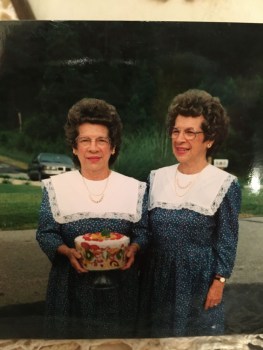 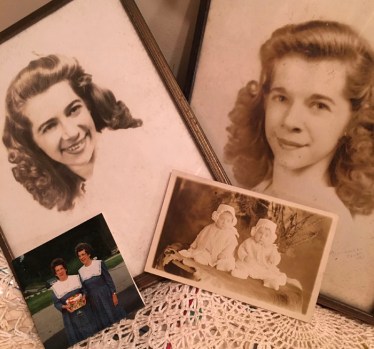 “If you find one of something, chances are you will find two,” says Tommy Kimball.  And he was right.

Cystic fibrosis yard sales and estate sales have quite a reputation in the Salisbury community. Helen and Ralph Brown have worked with a team of volunteers for more than 16 years, contributing almost $350,000 to aid in research for and to promote awareness of cystic fibrosis, which damages the lungs and digestive system.

The largest individual estate sale started in March when Tommy Kimball and sister Libby Holman asked if the Browns’ volunteers would consider doing the estate sale for their aunts’ home on Park Avenue. Why was there two of everything?  Well, the aunts were twins — Marie Barringer Cuthrell (husband Stewart) and Miriam Barringer Clary (husband Jim). Tommy Kimball and Libby Holman are children of the twins’ older sister, the late Catherine Barringer Kimball.

The twin aunts were the middle children of Myrtle (Fisher) Barringer and Calvin Brown Barringer. Born July 28, 1924, the tiny girls were christened Lily Marie (4 pounds, 3 ounces) and Anna Miriam (4 pounds, 5 ounces). Matching cast iron cribs and matching baby quilts are just two of the duplicate items still on the property. A pair of little wooden ironing boards, matching dolls and dainty crocheted baby caps were just a few things that told of a childhood filled with love and creativity. The most endearing childhood find was a small pair of matching pink cradles complete with composition baby dolls and wardrobes. In another closet, a pair of wicker doll strollers.

Certainly, the girls were the center of the world in the household, but there were quite a few folks living under the one roof.  The home was shared by parents Myrtle and Calvin, their three daughters and a son. Catherine Kimball’s husband, John, joined the home in 1941. In 1947, Miriam married Jim Clary and moved into the house. Marie and husband Stewart Cuthrell moved into the home when they got married in 1962. At one time, three generations and four family units lived in the rambling, two story, five-bedroom frame house. Grandmother Eugenia (Jennie) Fisher lived up the street and spent much of her time in the house as well. It’s amazing so many things came in twos, but there was only one very small bathroom on the first floor for all those folks!

Miriam worked in the Rowan County Clerk of Court’s office. Her husband was part owner in a local furniture company: Clary and Reavis. Marie worked in the offices of Carolina Rubber Hose while her husband, Stewart, spent more than 30 years as a nurse at the Salisbury VA.

Over the years, the twins were well-known around town for dressing exactly alike well into their 80s. Clothing is an obvious item to find in duplicate. Often hung together, the wide range of jackets, pants and dresses spans decades of fashion. And if a jacket has a pin on it, both jackets have the pin. Baby outfits, beach clothing from their teenage years as well as more recent garments tell a story of sewing, planning and how their time was spent.

In addition to the “twin” treasures and the normal knick-knacks, books, dishes and household items cystic fibrosis volunteers are used to dealing with, the Park Avenue house revealed incredible finds. Over the nine months of being in the house, there were daily surprises. It became an archeological dig through four generations of heirlooms and keepsakes.

Volunteers were often able to determine the general age of particular items based on how many of them there were. If there were two dolls that matched, those fell into the 1920s. Single bisque dolls likely belonged to the twins’ ancestors. Research into the name and make of dolls proved that out.

Single garments that were contemporary to the twins were likely older sister Catherine’s. Beautiful, carefully stitched insertion lace garments made of organdy likely date to the late 1800s and belonged to Myrtie Fisher Barringer or her mother.

A favorite discovery was an odd bisque “doll head” with a vague resemblance to Charlie McCarthey. The 7-inch head had grooves all in the scalp area. A couple of days of research revealed that this little character was Smiling Jim, created in 1939 as the original chia pet. It seems Jim is quite a collectible.

The unique closets in the upstairs of the house use available attic space. The narrow tunnels go back as far as 15 feet under the eaves of the house. It was obvious that at some point things were just stuffed into the closets and pushed back and compacted as tightly as possible. Each layer peeled back to reveal an older decade.

A cedar chest contained an enormous archive of Henry “Stewart” Cuthrell’s World War II artifacts: a pea coat, a Navy uniform, a panoramic photo of his ship and crew, medals, ribbons, etc. Some of the military finds were donated to the Rowan Museum. The two-story house contains hundreds of pieces of needlework: tatted, crocheted, embroidered and huck work.  There are cigarette lighters, pocket knives, briarwood pipes, kitchen gadgets, vintage lingerie, original paintings, four-bedroom suites, two dining sets, a collection of irons, a full toy chest untouched since the 1950s, local advertising memorabilia going back to the turn of the 19th century, vintage hats (two of most), books, Christmas collectibles, numerous sets of china and glassware.  None of that sounds too extraordinary until you stop to realize it covers all five families and more than 125 years.

A lot of genealogy was spread out in the details of clipped articles, documents, photographs, family notes. Volunteers enjoyed connecting the dots. An interesting inscription on the back of a painting provided details that led to the understanding of Stewart Cuthrell, Sr.’s name. A tragic 1940s story of a death at Iwo Jima, a father’s subsequent suicide and a mother’s attempted suicide was pieced together from a series of saved newspapers articles that included the surnames Cuthrell and Forbes.

Myrtle Barringer was a basketmaker as well as a ceramic crafter. She made matching birth announcement plates for her girls, and a generation later one for her grandson, Jay Clary. The house was filled with examples of her work. She won many county fair ribbons for both her ceramic work and basketry. Wicker baskets were in every room, including a bassinet made for Jay Clary in 1954. More than 100 baskets and hundreds of pieces of ceramic work have been cleaned and displayed in preparation for the upcoming sale.

Someone in the household was a quilter. Nearly 50 finished quilts have surfaced, carefully wrapped in brown paper and tied up with string. Some have never been used or washed, and the original pencil markings for quilting lines are visible. As to be expected, a few are in pairs! Traditional patterns included single Irish chain and trip around the world as well as samplers and scrap quilts are in the mix. A matching pair of worn embroidered quilts were for Marie’s and Miriam’s beds when they were young show beautiful needlework.

Thousands of incredible photos, documents, articles and books were sorted in large boxes.  Some of the material will go to the McCubbins Files in the History Room at Rowan Public Library. Some will go to the First United Church of Christ and the Rowan County Museum. The twins documented much of the restoration of the Park Avenue Neighborhood as well taking photographs from the groundbreaking to the ribbon cutting of Cannon Park, which grew before their very eyes right outside their front door!  Those will go to city archives along with photos of neighborhood Christmas parties the Clarys and Cuthrells hosted over the years. Rowan Museum was the recipient of a great deal of military collectibles.

Massive quantities of vintage linens as well as modern sheets, towels and blankets were handled in preparation for the sale. Many factory-sealed boxes of sets of Cannon towels were found. Those were left in the elaborate vintage boxes.

All other linens were washed, bleached, folded and ironed. Four volunteers spent an eight-hour day at a local laundromat and did the equivalent of 80 loads of linens and clothing in the large machines. Volunteers also did 20-25 loads of the more delicate linens in their own homes. Items not perceived as suitable for resale were folded, cut, packaged into 100 plus bundles and delivered to animal rescue groups and veterinarian offices in the area.

Men of the house had interests as well. More than 250 fishing lures will be offered for sale as well as rods and reels. An autographed Bass Masters baseball cap is among the collectibles. Many local lake maps have been found. Yard tools and woodworking tools are plentiful. Jim Barringer’s and Stewart Cuthrell’s workshops are filled with gadgets and supplies.

The property includes a cellar and several outbuildings as well as the main house.  One interesting feature is the unusual pulley system used for hanging out the laundry.  To use it, the person had to go up onto a platform about 8 feet off the ground with the wet laundry. Standing in one place, items were pinned on the double line and pulled over the back yard. Sheets never drooped to the ground or dipped into the koi pond.

New inventory will be set out as sales are made and space is created. There is simply too much stuff and too little space to have it all out in one sale. COVID protocols will be in place. Please wear a mask.