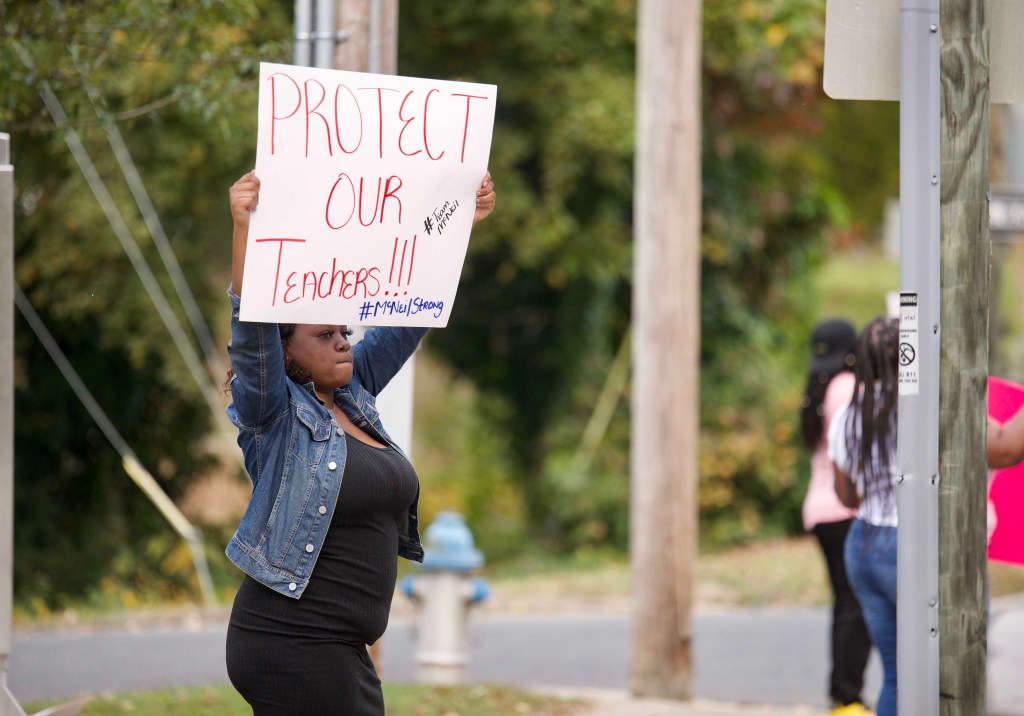 SALISBURY — A trio of protesters lined up on Mahaley Avenue in front of Knox Middle School on Friday to show support for an educator who made a difference in their lives.

Jakira Teasley said that educator Chris McNeil mentored her while she was a student at Salisbury High.

“He looked out for me whenever me and my family were going through very hard times,” Teasley said. “He was a great mentor, especially for the demographics we are in right now he reaches a lot of people.”

Teasley said McNeil was the reason she got into Livingstone College.

McNeil resigned as an assistant principal at Knox Middle School on Oct. 12, the same day Rowan-Salisbury Schools got wind of a video showing a confrontation between himself and a student. The video shows a heated verbal exchange, culminating in McNeil backing away from the student. The student then approached McNeil and pushed his body against him. That’s when McNeil restrained the student with the help of another faculty member.

The district issued a statement saying there is an ongoing investigation into the incident.

Teasley said she believes McNeil handled the situation well, noting he did not strike the student and added teachers should be protected.

“It’s going to be a tremendous loss without him being there,” Teasley said. “The kids are going to suffer more than they gain because he is such a good person and it is undeniable. I think people could get the wrong idea, but if you know him you love him.”

Teasley said she would like to see children who have behavioral issues get the help they need.

Pat Smith, another protester, said her children were students under McNeil and he always went the extra mile for them,

“I was a single parent and he was in the school system when my children attended school,” Smith said. “He was always good with my girls. He would keep them on point. He called me every time he noticed they were about to get into anything.”

Smith said her kids could have been steered in the wrong direction without McNeil in their school. Kids could always turn to him, Smith said.

Passersby on Mahaley Avenue honked and cheered the group on from their cars.

Social media posts and comments on news stories have overwhelmingly supported McNeil, commending his rapport with students, mentorship of young people and his overall impact on the community youth.

McNeil sent a statement to media outlets saying he is seeking legal counsel before commenting on the issue.