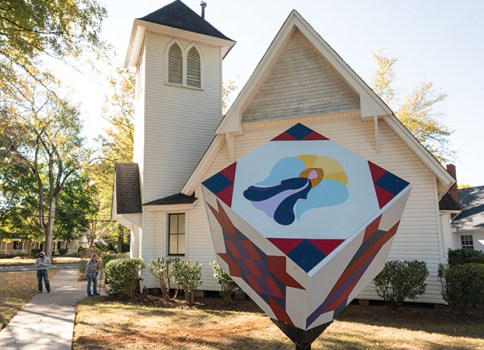 Josh Bergeron / Salisbury Post - One of the barn quilt cubes sits outside of Cleveland Presbyterian Church. One of the six sides pictures an angel. 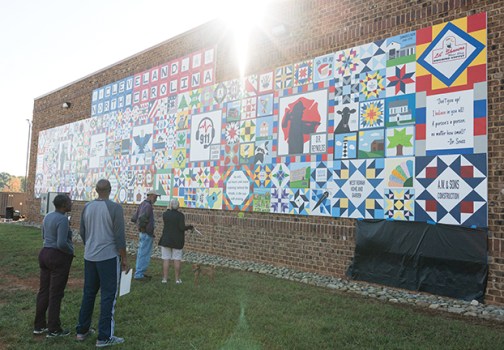 Josh Bergeron / Salisbury Post - Attendees of Saturday’s barn quilt mural unveiling check out the installation before festivities started. The mural is the largest of its kind in the country, at 1,000 square feet. It required hundreds of hours to complete and sits on one side of the Cleveland Community Fire Department. 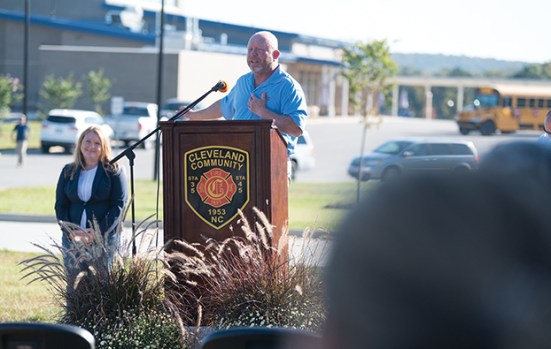 Josh Bergeron / Salisbury Post - Cleveland Mayor Pat Phifer speaks during Saturday’s ceremony. He thanked Allyson Summitt, who has volunteered to help the town and taken on an informal role as the town’s chief publicist. 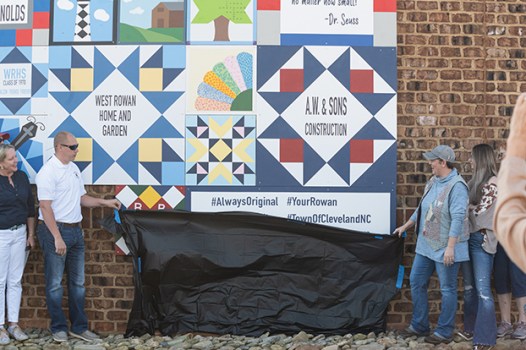 Josh Bergeron / Salisbury Post - Greg Summit of the Cleveland Community Volunteer Fire Department, left, and Elsie Bennett, right, reveal a portion of the barn quilt mural on the side of the town’s fire department. 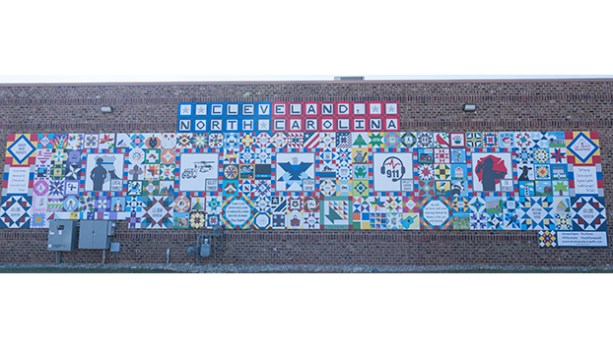 Josh Bergeron / Salisbury Post - The barn quilt mural on the side of the Cleveland Community Volunteer Fire Department.

CLEVELAND — The massive mural on the side of the town’s fire department is more than a collection of wooden squares, says Elsie Bennett.

“There are stories behind these squares,” Bennett told a crowd of people who gathered Saturday for the mural’s unveiling.

The mural is the largest of its kind in the country and contains artwork in the same style as barn quilts that dot Rowan County. At 1,000 square feet, it contains more than 160 pieces and required hundreds of hours of work. It stretches nearly the entire length of a brick wall on the Cleveland Community Volunteer Fire Department. The wall seldom receives direct sunlight, which should help the mural’s colors stay vibrant, Bennett said.

The mural is complimented by a 2.6-mile trail of cubes covered with barn quilt-inspired patterns.

“Putting the barn quilt up and doing these things, it brings the community together … and this doesn’t go away. It will stay here,” said Cleveland Mayor Pat Phifer.

Phifer hopes people who visit the barn quilt mural or walk along the trail think about the community.

“If you go look where the barn quilts are, they’re at our schools, the library and our churches,” he said.

The town plans to add QR codes to the barn quilt squares so that people can scan them with a smartphone and learn more about the location.

“We have in our town what a lot of people look for, and we just hope that other people can come and appreciate it as much as we do,” Phifer said. “Schools and churches, we’ve got them. That’s the community. Now, we’ve got the biggest barn quilt in the world on the side of the fire department, and in a rural community that’s where everything takes place.”

There are squares dedicated the branches of the military, local businesses, a Vietnam veteran, the former Cleveland Elementary School and family farms. Some squares are colorful patterns. Others are subliminal messages, Bennett said.

“The red cardinal is significant for a lot of people who have lost a loved one,” she said. “There’s a story, a poem, that goes with a cardinal where, if a cardinal appears, it means a loved one is near.”

She said a woman painted the red cardinal square in memory of her father.

Sue Gray and Wanda Kennedy, who were standing in front of Cleveland Presbyterian Church Saturday, said they were glad to see a cube added in front of their church. They’re hoping to grow membership in the church and said the cubes and mural make Cleveland a nicer place to live.