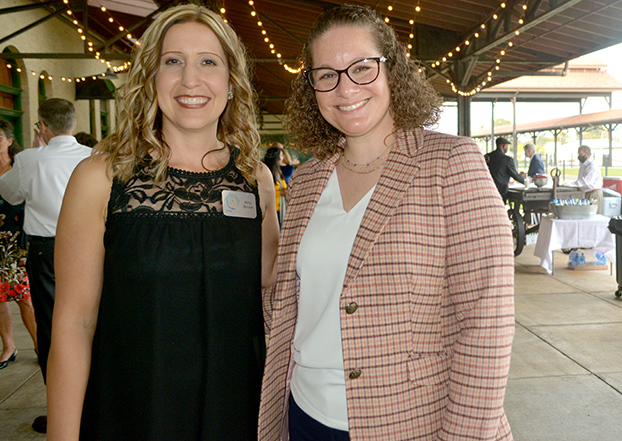 SALISBURY — It was again a beautiful day in the neighborhood in Salisbury on Thursday evening as Dana Winters returned as keynote speaker for Smart Start Rowan’s Shirley P. Ritchie Champion for Young Children Event at Salisbury Depot.

“It’s been a really difficult year and a half,” Brown said. “We wanted to ask her back because anything with Mister Rogers is calming and rejuvenating. We thought people could use a little more Mister Rogers in their lives right now. We sure can.”

Winters entitled her remarks, “Celebrating the little moments of life.”

To prepare, she combed the center’s archives under the topic of celebration. She came up with three pieces of paper.

Mister Rogers always reminded children to look for the helpers, and Winters said that the Fred Rogers Center works with the helpers — those who support the healthy development of others.

We can learn from the helpers that every child needs “at least one person who cares for you, supports you, and can be a buffer for these difficult times.”

Also, she said, “Each of us is more than just one thing. Our helpers see children as whole children. There is more than one way to support others, as we’ve seen in the past 19 months.”

Finally, Winters said, helpers need support and appreciation, too. Think of the children first, she said, then think of the helpers.

Taking a page from Mister Rogers, Winters asked attendees to reflect for a few moments on the people who got them where they are today.

“What comes next?” she asked, after 10 seconds elapsed. “Who do you have the opportunity to encourage?”

Also on the agenda were remarks by Amy Cubbage, president of the North Carolina Partnership for Children, and a video presentation, “25 Years of Building Brighter Futures.” That video will be available on Smart Start Rowan’s social media sites early this week.