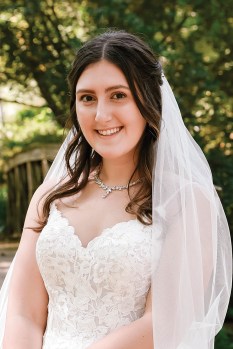 Marian Lee Hough, of Salisbury and David James Schouweiler, of Lexington, were united in marriage Oct. 23, 2021 at St. John’s Lutheran Church in Salisbury.

The Rev. Dr. Rhodes Woolly officiated the 3 p.m. ceremony, which was followed by a reception at Peeler Hall at St. John’s Lutheran Church.

The bride was escorted by her father, Boyd Hough, and attended by Brooke Hicks of Black Mountain, as matron of honor. Bridesmaids included sister-in-law of the bride, Danielle Hough of China Grove; Rebecca Agner of Salisbury; and Destiny Crocetto of Ridgeland, SC.

Robert Schouweiler was his brother’s best man. Serving as groomsmen were brother of the bride, Nathan Hough of China Grove; James Frye of Hickory; and Michael Hinson of Richfield.

A 2013 graduate of Jesse Carson High School, Marian received a Bachelor of Science in Education of Social Sciences and a Bachelor of Science in History with a minor in Political Science from Western Carolina University in 2017. She received a Master of Education in Curriculum and Instruction with a concentration in Social Studies from the Univeristy of North Carolina at Charlotte in 2020. She is employed as a teacher for Rowan – Salisbury Schools at the Rowan County Early College.

David is the son of the Rev. James and Karen Schouweiler of Fremont, MI. He is the grandson of Lois Schouweiler and the late Arthur Schouweiler of Owatonna, MN and Elise Vermilyea and the late James Vermilyea of Fremont, MI. A 2006 graduate of Fremont High School, David received a Bachelor of Science in Education of Biology with minors in Psychology and Chemistry from the University of Michigan in 2011. He received a Master of Science in Education of Instructional Systems Technology from Indiana University in 2015. He is a doctoral student at the University of North Carolina at Greensboro studying Teacher Education. David is employed as a teacher for Rowan – Salisbury Schools at the Rowan County Early College.

The evening before the wedding, the groom’s parents hosted a dinner to honor the couple at St. John’s Lutheran Church.

Following a wedding trip to Charleston, SC., the couple are making their home in Lexington, NC.