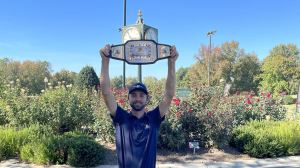 The UNC Greensboro graduate student won the Grandover Championship on his home course.

Lyerly is  the reigning Southern Conference Player of the Week and probably will repeat that honor.

Lyerly shot 66-66-70 — 202 at Grandover and didn’t make a bogey until the final round. He made two on Sunday, but he also made four birdies.

He made 16 birdies in the tournament.

“It’s always nice to get a win on your home course,” Lyerly told UNCG sports information. “I practice out here all the time, so I feel confident knowing the course. Knowing all the hard work that we put out here as a team and it was nice to see it pay off. We had a few more of our parents and spectators out on the course today so it was fun to have some more people on your side out there. Winning twice in two straight tournaments, is not too bad. I am glad I was able to have a nice weekend.”

Lyerly did everything right the first two rounds. He struggled with the driver some on Sunday, but was still able to scramble for pars.

Richmond’s Michael Childress played as an individual in the tournament and shot 73-75-75 — 223.

J.R. Smith, the long-time NBA player who competes for North Carolina A&T, drew the largest gallery and the most media attention, but shot 92-80-83 and was 97th out of 101 golfers.