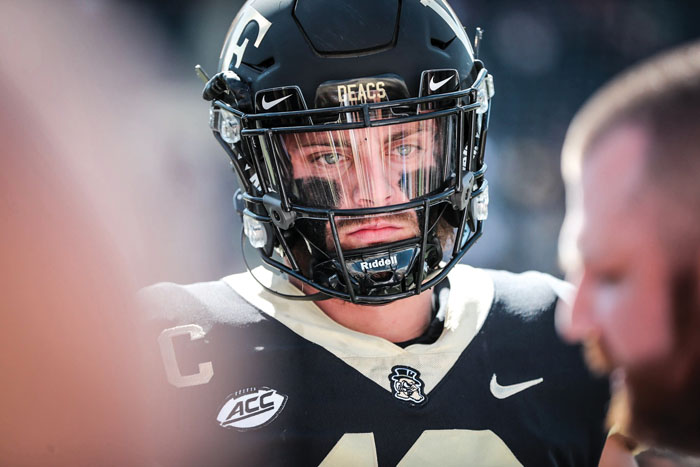 WEST POINT, N.Y.  — When it was over, Wake Forest coach Dave Clawson used one word to describe it: “Wow!”

Sam Hartman threw for a career-high 458 yards and five touchdowns in a big-play display and ran for another score, and No. 16 Wake Forest defeated Army 70-56 on Saturday to remain unbeaten in front of a sellout crowd at Michie Stadium.

“It felt like whoever had the ball last was going to win,” Clawson said. “That was about as clean a performance as I’ve ever seen. Every time we had to make a play we made a play. We found a way to win.”

Army (4-3), which lost its third straight and had its 13-game winning streak at Michie Stadium snapped, had not defeated a ranked opponent since a 17-14 victory over Air Force in 1972. Still, the Black Knights made Wake Forest (7-0) earn it, matching them on the scoreboard until a costly interception return for a touchdown in the third quarter gave the Demon Deacons the breathing room they needed.

Hartman completed 23 of 29 passes and had touchdown passes of 41, 54 and two of 75 yards as he matched the Michie Stadium record for scoring passes. Jaquarii Roberson had eight catches for 157 yards and three touchdowns and A.T. Perry had six catches for 146 yards and one score.

Army rushed for 416 yards and finished with 595 yards offensively as the teams combined for 1,233 yards in a game that featured just one punt and was the second-highest scoring game involving an Atlantic Coast Conference team, according to Elias Sports, after Pitt’s 76-61 win over Syracuse in 2016.

Davidson (4-1, 3-0 Pioneer) entered leading the FCS by averaging 300 yards rushing per game, and gained 363 yards on 48 carries against Butler. Hilliard carried it four times, including a 59-yard run to tie it at 7, for 105 yards. Coy Williams rushed for 65 yards and a score, his 10th of the season.

The Catamounts (1-6, 1-3 Southern Conference) led 31-10 at halftime as Davis found Calvin Jones for seven yards, TJ Jones for 40 and Raphael Williams for 10.

The Bulldogs (2-5, 1-3) answered with a pair of touchdowns, the first coming after Western Carolina turned it over on its own 3. Then TJ Jones, a transfer from Tusculum, scored on runs of 30 and 43 yards as the Catamounts regained control.

PITTSBURGH (AP) —  Kenny Pickett guided No. 23 Pitt to a decisive win over the flailing Tigers, giving his burgeoning Heisman campaign a serious jolt and stamping the Panthers (6-1, 3-0 Atlantic Coast Conference) as the runaway favorites in the Coastal Division.

Gardner-Webb 28, Robert Morris 17: Bailey Fisher went 17-for-22 passing for 163 yards and two touchdowns and Gardner-Webb controlled from the outset.

Later, Ty French made it 14-0 when he came up with the strip and sack of Robert Morris quarterback George Martin in the end zone. Following another Robert Morris (2-4, 1-2) turnover, Fisher connected with T.J. Luther on a 12-yard scoring pass for a three-score lead early in the second quarter.

Richard, who completed 16 of 20 passes for 242 yards with one interception, knotted the score at 7 with his first TD toss — a 2-yarder to Quentin Chaplin with 1:37 left in the first quarter. That was all the scoring until Kluivert Akubuo-Onwuemeka nailed a 25-yard field goal with 5:08 left in the second to give Morgan State a 10-7 halftime lead.

Richard gave the Eagles (3-4) a 14-10 lead in their MEAC opener with a 31-yard scoring strike to Isiah Macklin. The Bears (0-7, 0-3) answered with Romello Kimbrough’s 55-yard TD run for a 17-14 lead, but Richard gave NCCU the lead for good when he connected with Andrew Smith for a 53-yard score on the ensuing drive.

Levi Wiggins returned a fumbled ball 94 yards for a touchdown in the first quarter for Campbell (3-4, 2-2), which was held to 188 yards of offense. It was the fifth straight win for Kennesaw State (6-1, 3-0 Big South Conference).