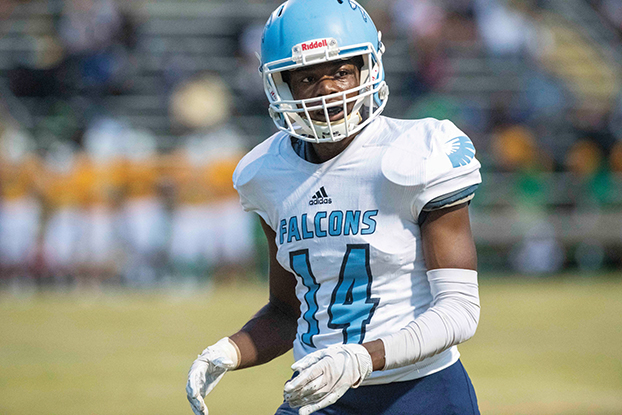 CONCORD — Keveus Phillips, a senior inside linebacker, knocked down Noah Loeblein’s fourth-and-2 pass from the Concord 15, and the Spiders held on to beat West Rowan 21-13 on Friday in an epic clash that decided the South Piedmont Conference championship.

Loeblein was looking for tight end Ben Sweet, but Phillips’ hand got there first.

A lot of tireless, aggressive Spiders who played both ways — Kadin Presutti, Antonio Jackson, Keyon Phillips, Keveus Phillips, Xavier Sanders — made another major step on a remarkable journey. Concord now has won six in a row, but the Spiders were a dismal 4-25 the previous three seasons. When this season started, no one was picking Concord to do much of anything — except lose some more.

“Our kids have had to walk around with their heads down in this town, in this community, and listen to a lot of people telling them Concord football would never, ever be good again,” winning coach Marty Paxton said. “But this group has always fought back. This is a resilient bunch.”

West (5-3, 4-1) battled down to the last play, but couldn’t quite overcome the wounds, some of them self-inflicted, that lingered from the first half.

The Falcons surprised the Spiders (6-2, 6-0) with a pooched kickoff to open the game, recovered it, and started a short-field drive inside the Concord 35. West quickly advanced the ball to the Concord 5, but two running plays lost yardage. After an errant shotgun snap on third down, the Falcons had to settle for a Juan Arteaga field goal for a 3-0 lead.

“Field goals instead of touchdowns early for us and that changed the entire game,” West coach Louis Kraft said. “If we punch it in early, I think we wind up winning.”

Concord then took control of the action, with its offensive line and option attack punching holes for steady, methodical gains. Jackson completed a 65-yard drive with a 1-yard burst for a 7-3 lead with 3:38 left in the first quarter.

After Presutti intercepted Loeblein, Concord made it 14-3 early in the second quarter. A West penalty for taunting after a tackle for loss hurt the Falcons’ attempt to make a stand, and Concord QB Zack Jenkins executed the short scoring run that finished the drive.

There was more adversity for the Falcons when a touchdown pass from Loeblein to Peter Williams-Simpson was called back due to an ineligible receiver drifting downfield.

The Falcons still pushed all the way down to the Concord 1, mostly on the legs of Akin Robinson. But the Spiders had 250-pound Jameson Hackett causing all kinds of problems in the trenches. With their backs to the wall, the Spiders stuffed two runs for losses, and West coach Louis Kraft had to call on Arteaga again.

Arteaga delivered again, but his field goal left the Falcons trailing 14-6 at the break.

“The difference in the game was eight points and those eight points were the result of our defense holding West to two field goals instead of allowing touchdowns on those first-half possessions,” Paxton said. ‘Those were huge stops.”

Concord maintained the momentum in the second half, stunning the Falcons with a forward pass, something they employ only a handful of times in most games. Jenkins got the ball to Presutti, and he out-sprinted West’s defensive backs for a 75-yard touchdown. Concord led 21-6 with 5:56 left in the third quarter and appeared to have things under control.

“Our guys played amazing most of the night,” Paxton said. “We don’t throw it much, but they came through with a great throw and a great catch and run for that touchdown.”

Down 21-6, West mounted a desperate comeback attempt. On third-and-10 from the Concord 30, Loeblein was pressured and was intercepted by Presutti when he tried to hit Williams-Simpson in the back of the end zone.

Concord kept grinding the ball for the next six minutes and was on the verge of putting the game away when it went back to the air. Lee Vaughters made an interception for West with 6:30 left to play.

“We had an illegal shift on that snap, and some of our guys kind of stopped,” Paxton said. “That was a blunder on our part, and we were fortunate West didn’t run it back for a touchdown.”

West did put in the end zone, a little over a minute later. Loeblein connected with Williams-Simpson for a 55-yard strike. It was the 50th TD pass of Loeblein’s career. Arteaga added the PAT, and the Falcons were down 21-13.

Now the Falcons had the momentum, and West’s defense stopped Concord quickly. West got the ball back at its 30-yard line with 3:30 left to play.

West nearly pulled it off. Loeblein converted on a do-or-die fourth-and-7 with a completion to Paxton Greene to the Concord 38. Loeblein’s pass to Garrett Fesperman moved the chains and moved the ball to the Concord 23 with 1:30 remaining.

Loeblein was sacked on the next play, but a short flip to Adrian Stockton on a jet sweep and a scramble to the sideline by Loeblein brought up that decisive fourth-and-2 from the Concord 15. The resilient Spiders were equal to the challenge. They made the defensive play that secured the win and the conference title.

“Those last six minutes or so we were just fighting for our lives against a really good team,” Paxton said. “Our guys were resilient one more time.”

Loeblein has been putting up huge passing numbers, but he was limited to 10-for-20 for 156 yards against Concord, with most of his production coming in the fourth quarter. Williams-Simpson had three catches for 75 yards.

Robinson had 14 carries for 78 yards.

Canyon Turner was the defensive standout for the Falcons.

Jenkins completed only two passes, but one of them was that 75-yard play that Presutti turned into a track meet.

Concord rushed for over 200 yards, with Presutti getting 62 and Jackson pounding out 52 more on 16 workhorse carries.

“Concord won the line of scrimmage and they also got all the breaks,” Kraft said. “In this type of game, that’s all that matters.”

Both teams are headed for the 3A state playoffs.

West wraps up the regular-season against East Rowan, which got its first win of the season on Friday against South Rowan.

Carson possessed the ball for almost the entire second half and put up huge offensive numbers behind solid offensive line play. Carter Dowd rushed 30 times for 213 yards and three touchdowns. Hunter Burris ran 19 times for 132 yards and a touchdown. Jordan Galarza picked up 134 yards on 20 carries and scored a touchdown.

“We controlled the line of scrimmage for 48 minutes,” Carson coach Daniel Crosby said. “I’m very pleased with that. It was a big night for the Cougars.”

Still, the first half was mostly frustration for the Cougars (3-5, 2-3). They moved the ball easily enough but couldn’t finish drives. They missed a field goal and also lost a fumble inside the Central 5.

Central (2-6, 2-3) scored first, but the Cougars broke through when Galarza got loose for a 35-yard scoring run with 5:20 left in the second quarter. Luis Avilez kicked the PAT for a 7-6 halftime lead.

All heck broke loose in the third quarter, as the teams traded four touchdowns in a span of four minutes.

The Vikings promptly ran back Carson’s kickoff for a touchdown and made it 14-13.

Central struck back immediately, with a long kickoff return to the Carson 41 and a touchdown pass one play later to make it 21-20.

Carson was weary of long Central kickoff returns and followed with an onside kick. Carter Breitzman’s recovery near the Central sideline turned out to be one of the night’s bigger plays. Then Carson scored again, with Dowd getting into the end zone on fourth-and-goal from the 1 for a 35-20 cushion.

A Carson interception by Trevor Vaughn, who took the ball away from a receiver, sealed the win.

Bryson Bare also had a fumble recovery for Carson.

The Cougars were able to exhaust the clock with some physical first downs on their final possession.

The Cougars wrap up the regular season against South Rowan.

SPENCER — In a game that began on Thursday night and was completed on Saturday morning, North Rowan demolished Lexington 66-28 for a Central Carolina Conference win.

The Cavaliers led 28-14 in the second quarter on Thursday when a power failure caused by a transformer fire forced a postponement.

Amari McArthur scored on a 45-yard punt return and had TD receptions of 27 and 50 yards.

Undefeated Salisbury was off this week and will host North Rowan in a regular-season finale on Friday.

MOORESVILLE — There doesn’t appear to be a huge difference between A.L. Brown and Mooresville, but the Blue Devils have won the close ones in Greater Metro Conference play this season.

Mooresville scored on its first possession, taking the ball 80 yards and scoring on Sebastian Brown’s pass to Kaden Pigeon.

Brown threw another TD pass in the second quarter, this one to Messiah Ramseur for a 14-0 lead.

A.L. Brown’s defense shut out Mooresville in the second half.

Mooresville, coached by former Catawba star and former West Rowan and North Rowan head coach Joe Nixon, will take on Lake Norman for second place in the GMC — and an automatic playoff berth —next week.

The Wonders are finished with conference play and will take on Concord in the “Bell Game” to finish the regular season.

Davie led 27-0 after a quarter and by 41-0 at halftime. The War Eagles scored in the fourth quarter for a running clock.