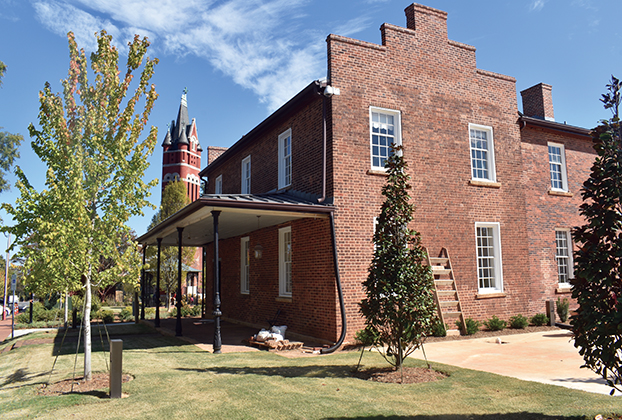 SALISBURY — Now that Bell Tower Green is open and buzzing with visitors, the next piece of the puzzle for the park’s leadership is finding a tenant for the Wrenn House.

The historic two-story building at 115 S. Jackson St. was originally constructed in the early 1800s and operated for some time as a female academy. More recently it was home to the Wrenn House Grill & Pub, which has been defunct for several years.

When Bell Tower Green leaders began the process of shaping the park several years ago, they also decided to initiate extensive renovations inside and outside of the Wrenn House.

“Over the past two years or so, we’ve put on a new roof. We have repointed all of the bricks and we have refinished and repaired all of the windows, except for those we may alter during renovation,” Bell Tower Green President Dyke Messinger said. “And lastly, we put a new floor, a more substantial floor in the kitchen.”

With some of the much-needed improvements complete, the Wrenn House is now being marketed to potential restaurateurs.

“We just want to add another option to the downtown dining scene,” Messinger said. “The more restaurants there are, that brings more people. The park is bringing more people. People may want to come to see the park and then go out to have dinner or lunch.”

Messinger said Bell Tower Green is committed to conducting even more renovations on the Wrenn House once a tenant has been secured.

“We want to get a good feel from a restaurateur from what they would like to see in the building and then we will go ahead and execute that in partnership with the restaurant,” Messinger said.

The real estate agent for the project is Charlotte-based John Hadley of The Nichols Company.

Although the building still needs some “serious work,” Hadley said the location is tough to beat.

“I think the setting in front of a park and as beautiful as the job they’ve done with that park, we can only hope that a restaurant would follow very similar to that,” Hadley said. “What a wonderful setting, looking out at the Bell Tower.”

There have already been several nibbles from local restaurateurs on the property, as well as some interest from Charlotte-based chefs, Hadley said. However, the current economic conditions caused by the pandemic may be making potential buyers a bit more hesitant.

“Everybody is waiting to see if this whole employment situation begins to level out, but it’s a very tough time for restaurants,” Messinger said. “They’re having trouble staffing the restaurants they have, not to mention starting new.”

The Wrenn House is about 6,000 square feet. There’s no shortage of windows on the brick building and the front porch looks toward the historic Utzman-Chambers House.

There’s also a patio on the side of the building that could be utilized as scenic outdoor seating where diners can enjoy a meal next to the park’s popular playground. The kitchen inside the building has a new floor, but is otherwise barren. Messinger said the lack of culinary infrastructure would give a restaurateur a “blank slate” to create their dream kitchen.

The restaurant will not have any dedicated parking spots, but Messinger said he doesn’t see that being a deterrent for a potential tenant.

“We believe that within a couple of blocks of the restaurant, there is adequate parking,” Messinger said. “The restaurants that are looking, that is a question they’ve asked. No one has walked away because of parking at this point.”

Though the park itself will be deeded over to the city of Salisbury, Bell Tower Green will remain the owners of the Wrenn House. The plan is to put the revenue generated from a tenant back into the park.

“That’s been our goal all along is to create a model where Bell Tower Green would earn revenue off of the rent and that money would be given to the city to help maintain the Bell Tower Green park,” Messinger said.