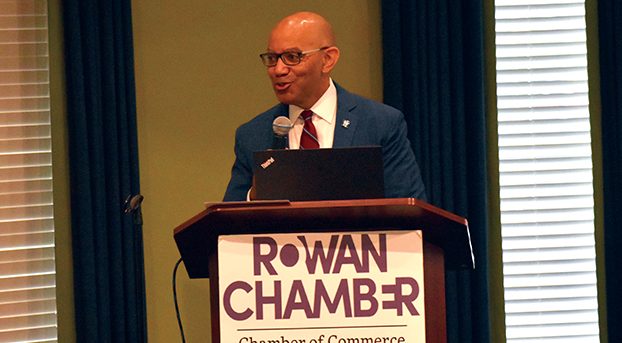 SALISBURY — Talking to a room full of Rowan County professionals, Thomas Stith III on Thursday emphasized the importance of strengthening the bonds between businesses and North Carolina’s Community College System.

“Whether it’s IT, biotechnology, nursing or our traditional trades, we have to have a very close alignment with our business community to ensure we meet their needs,” Stith said.

Stith, president of the North Carolina Community College System, was the keynote speaker at the Rowan County Chamber of Commerce’s Power in Partnership program on Thursday morning. The monthly meeting has been held virtually for most of the pandemic, but it returned to the Trinity Oaks retirement community for the first time since February 2020.

Stith was introduced by Rowan-Cabarrus Community College President Carol Spalding, who gave a brief summary of the pandemic’s  impact. “We were on a roll and then we had COVID,” Spalding said. “We slowed down a little bit, but we are resilient. We’re still graduating 1,700 students a year.”

Spalding said the community college pivoted to online learning during the pandemic and the desire among students to take virtual classes has remained.

“You can drive by the campus and, if you don’t see many cars, it’s because last year we had 92% of our students go all online,” Spalding said. “This year, they have chosen 82% to be online. We have mostly online students by choice now because they have choices to go face-to-face or not.”

The COVID-19 pandemic, Spalding said, put a hold on the college’s plans for a bond issue that will pay for a number of campus improvements, including a new facility for Rowan County Early College and new automotive, welding and machining space as well as a fire decontamination facility. The bond referendum was passed by voters in March of 2020 and will result in a property tax increase.

“We expect the bond issue to come out and be put to use starting the next fiscal year in July,” Spalding said. 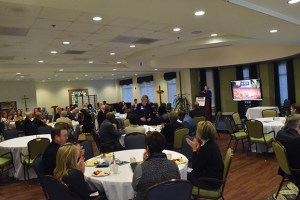 The Rowan Chamber’s Power in Partnership breakfast returned to Trinity Oaks on Thursday morning for the first time since early 2020. Ben Stansell/Salisbury Post

Following Spalding’s remarks, Stith took the lectern and highlighted the three pillars he wants the state’s community system to rally around. Stith, previously a district director of the U.S. Small Business Administration, became president of the system in January. He is currently traveling across the state to visit all 58 of the system’s colleges.

Stith’s first pillar is for the system to become “the first choice for accessible and affordable education in North Carolina.” The third tenet is for the system to be “a national model for diversity and inclusion.” The second pillar, which Stith gave the most attention during his speech, is for the state’s community colleges to “participate not only in the economic recovery of our state, but the sustained growth as we move forward into the future.”

Stith said North Carolina community college’s are preparing the workforce for a global economy through a number of initiatives, including apprenticeship programs.

“As I travel across the state talking to business leaders and they express the challenge of finding highly trained and qualified individuals and that’s the goal of the community college system,” Stith said.

Stith’s remarks weren’t limited to ways businesses can reap the benefits of a robust community college system. He also called attention to the need for more funding to increase the salary of faculty members as state legislators and Gov. Roy Cooper continue to work on enacting an overdue budget.

The average community faculty member in North Carolina earns just over $50,000 per year, which ranks 41st in the country in faculty pay despite North Carolina having the third largest community college system in the nation.

Stith said the pay problem won’t be fixed in one legislative session and that the system is developing a three-year strategic plan around its legislative agenda. Stith said he encourages people to be patient and thankful to lawmakers such as Rep. Harry Warren and Rep. Wayne Sasser, both of whom were in attendance for the breakfast and represent parts of Rowan County.

With an abundance of available scholarships and financial aid in place, Stith also encouraged interested individuals to explore the idea of attending community college.

“There’s several financial avenues, various scholarships and grants that will in many cases cover the cost of tuition and fees for students,” Stith said. “Certainly in the coming years, for accessibility and affordability, that’s why we should be the first choice for higher education.”

More information about available financial aid at RCCC can be found online at rccc.edu/paying-for-college/.

In response to a question about efforts to de-stigmatize trades, Stith said the system is working to engage with students in the K-12 system to amplify the economic opportunities that exist for plumbers, welders and other tradespeople.

The next Power in Partnership will be held on Nov. 18. The theme will be “Apprenticeship and Internship programs” with speakers Eric Tillmon and Sylvia Jones with ApprenticeshipNC. The plan is for the event to be held in-person again at Trinity Oaks.

“I think that if everyone in the business community particularly continues to stay safe, we can go back to having events in person,” Rowan Chamber President Elaine Spalding said.

The Rowan Chamber president said she encourages people to support local businesses and also made a call for unemployed people to get back into the workforce. Job seekers will have the opportunity to engage with about 40 employers at the community job fair on Thursday, Oct. 28 at West End Plaza from 2-6 p.m.