Football previews: Deacs only the third ranked team this century to travel to West Point 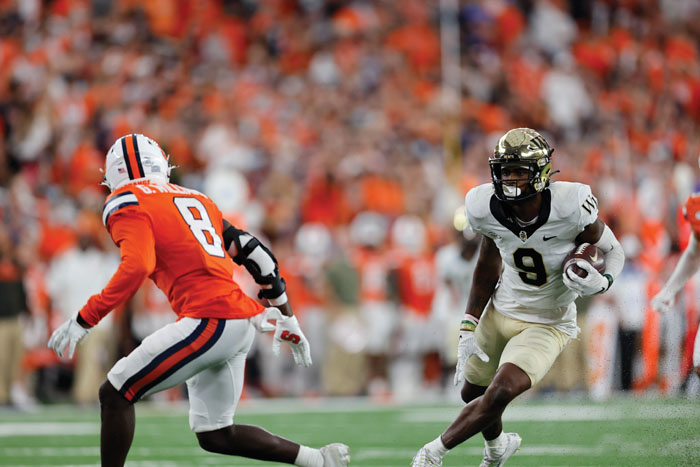 WEST POINT, N.Y. — Army is at the end of a two-game stretch that’s as tough as it gets for a service academy.

The Black Knights (4-2) host No. 16 Wake Forest (6-0) on Saturday, a week after losing at Wisconsin by six points in a game decided by a late Army turnover.

The Demon Deacons are just the third ranked team this century to travel to West Point, and despite the 20-14 loss to the Badgers, Army coach Jeff Monken liked what he saw in the second half in the hostile environment.

“To go toe-to-toe with a team like Wisconsin is really encouraging for our football team, and knowing that we truly did have a chance to win the football game, I think that was positive,” Monken said. “I think it’s really positive that our guys, they don’t see it as a moral victory. They were sorely disappointed. They fully intended and expected to win the game.”

Wake Forest is emerging from a bye week with the program’s first 6-0 record since 1944 — nine years before the Atlantic Coast Conference was formed — and its first 4-0 start in the ACC.

The Demon Deacons are coming off an overtime win at Syracuse that ended on A.T. Perry’s 22-yard scoring catch to cap a three-TD day. It was the second game this year they won on a late score, going back to a home win over Louisville on a field goal.

Wake Forest finds itself as the front-runner in a league race that is far more wide open than usual, with six-time reigning champion Clemson stumbling at North Carolina State and looking nothing like the offensive machine of recent years.

Coach Dave Clawson said the Demon Deacons are enjoying the moment but not getting lost in it. Defensive lineman Miles Fox sensed the same during the open weekend.  “Usually, it’s the younger guys kind of messing around a bit, getting complacent,” Fox said. “But everyone is locked in and we’re at a really good place right now.”

The Demon Deacons could also get a boost with the return of defensive back Nasir Greer, who hasn’t played since the Sept. 18 win over Florida State due to injury. Clawson said the plan is for Greer to travel for the game and dress, though whether he plays could be a game-time decision.

The Demon Deacons are again among the best at avoiding self-inflicted mistakes. Wake Forest is tied for fifth in the Bowl Subdivision in turnover margin at plus-8, as well as ranked in the top 20 of the FBS in both fewest penalties and penalty yards per game.

Army has committed just four turnovers and leads the nation in fewest penalties (21).

The Black Knights have won 13 straight at Michie Stadium. It’s family weekend and the academy says the stadium is sold out.

Clawson said Wake Forest started preparing for Army’s scheme a little earlier than a typical opponent, saying his team spent about half the time on Army and the other half on fundamentals to improve depth. “It was a great time for a bye week,” Clawson said. “We’ve been able to get healthy.”

MIAMI GARDENS, Fla. (AP) — Miami has never gone through something quite like this.

Back-to-back losses, each by three points or less, and both coming when the Hurricanes had the ball inside the opponents’ red zone with a chance to tie or win the game in the final seconds. In nearly a century of football at Miami, that’s never happened.

A season that started with high expectations for the Hurricanes has turned into a salvage operation, and Miami (2-4, 0-2 Atlantic Coast Conference) will seek to avoid its worst start in nearly half a century when it plays host to No. 18 North Carolina State (5-1, 2-0) on Saturday night.

“It will be an important week for us to fix some things that are ailing us,” Miami coach Manny Diaz said. “I can’t fault our effort, our heart, our mental toughness, but there are some obvious things that we’ve got to get corrected to give ourselves a chance to win these games.”

The Hurricanes are coming off a 30-28 loss to Virginia where a would-be-gamewinning field goal bounced off the left upright on the final play, and a 45-42 loss at North Carolina where Miami got to the Tar Heels’ 16-yard line before turning the ball over with six seconds remaining.

With that, it marked just the third time in Miami history that consecutive games were lost by three points or less. It happened in each of the last three contests of the 1984 season, all by exactly two points — including Boston College’s “Hail Flutie” game — and happened in consecutive weeks against Florida State and LSU in 1966.

Those games, though, didn’t end the way Miami had to accept defeat in its last two games, with the Hurricanes having the ball and on the doorstep in the final moments.

“Obviously, their record at 2-4 is not impressive,” N.C. State coach Dave Doeren said. “But they’re playing a lot better than I expected to see on tape. … They’re scoring a lot of points, they’re very fast on the perimeter.”

A win Saturday would match N.C. State’s best start under Doeren; the 2017 team also opened 6-1.  The Hurricanes beat N.C. State 44-41 on the road last season, a game where Hurricanes quarterback D’Eriq King was brilliant: 430 yards, five touchdown passes, including a 54-yarder to Mike Harley to put Miami ahead for good with 2:43 remaining. King is injured and out for the season, so the Wolfpack will see Tyler Van Dyke at quarterback.