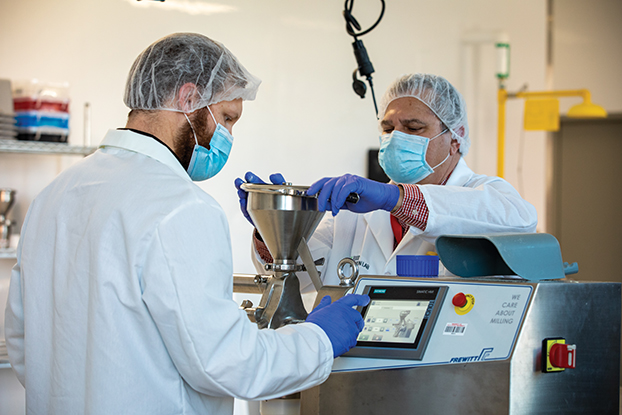 “We were looking to launch a food product and the area we really thought we could add a lot of value and solve a problem was in brain health,” Brad said.

Motivated by their family’s personal experience with dementia, the Charlotte couple worked with the NCFIL to develop a nutritious powdered beverage mix packed with whole foods intended to boost cognitive function by delivering omega 3s, antioxidants and fiber. The couple officially launched their product under the Memore brand name in May, becoming an example of what can happen when motivated entrepreneurs join forces with the research team at the downtown Kannapolis laboratory.

“Anytime a product developer and in our case a customer of ours gets a product into the market, we feel especially proud to have helped them get there,” said Bill Aimutis, executive director of the North Carolina Food Innovation Lab. “It’s always good when you go to a grocery store and see something you’ve worked on or see something you’ve actually developed get onto the shelf.”

The NCFIL is located on the North Carolina Research Campus and is managed by N.C. State University, but it’s a professional organization rather than a student teaching facility. The 16,000-square-foot lab is the nation’s only facility with good manufacturing practice capabilities dedicated to supporting the plant-based food innovators.

“We’re doing our best right now to make food companies and food entrepreneurs across the country recognize that North Carolina is in a good position to be the food valley for the United States,” Aimutis said.

Local economic development leaders point to the NCFIL as one of the reasons why Rowan County was ranked as the No. 7 metro area in America for food processing locations by Business Facilities Magazine.

“The proximity to the Food Innovation Lab is something that we want to capitalize on,” Rowan Economic Development Council President Rod Crider said. “It’s really a resource for both established companies and new companies in exploring new food products and helping in terms of testing the product by ability and the manufacturing process.”

The NCFIL was still in its infancy when Erika and Brad met with the lab’s leaders for the first time in 2019.

“This is at the time when they didn’t even have all of their equipment yet,” Brad said. “They were just opening it up, just settling down in Kannapolis, which is just a great facility.”

Before lab technicians got to work creating Memore’s product, Aimitus and his staff helped Erika and Brad refine their vision for what the product would be and how it would fit into the market.

“Smaller companies do have advantages and they helped us realize what that could potentially be and how to use our skill set,” Brad said. “We did an ideation session to try to figure out what would really make our product stand out from the crowd.”

Once the research and development process got underway, the biggest challenge was making a tasty, effective product using milled whole food powders instead of highly-processed extracts.

“When you’re losing whole food ingredients, it’s less controlled if you will,” Brad said. “It’s easier to use synthetic powders because it’s really easy to calculate adding four grams of fiber right now. That’s easy if you’re using synthetic powders. With whole foods, you’re estimating what the product looks like. It took a long time to get our flavor profiles right.”

The end result was three different flavors of the powder, including blueberry and lemon, blackberry and ginger and a slightly-vanilla tasting base flavor. The powders are meant to be mixed with water or into smoothies. They can be purchased as a one-time buy or customers can subscribe to have their stock replenished every month.

Erika and Brad’s dedication to whole foods might have extended the process, but Brad said it also might be their product’s greatest differentiator.

“Food marketers are so good at what they do that they can make a horrible ingredient look really healthy,” Brad said. “We didn’t want to join in on that. I know it presents some risks in terms of our overall product costs, and the ability to source these types of ingredients, but we felt really strongly that to make an impact in a crucial area like brain health we needed to be as truthful to our virtues as possible.”

The painstaking undertaking of developing a product from scratch was further complicated by the COVID-19 pandemic. The NCFIL, which adheres to strict food safety guidelines, shut down in-person operations for several months.

Not wanting to waste any time, Brad took matters into his own hands. He bought a lab bench, had ingredients shipped to his home and turned a spare room in a satellite location of the NCFIL.

“The final formulas got more or less hashed out in our guest bedroom,” Brad said. 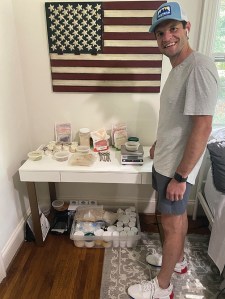 Memore Co-Founder Brad Lepczyk stands next to the small, makeshift laboratory he worked from for several months during the pandemic. Brad and his wife, Erika, joined forces with the North Carolina Food Innovation Lab to develop powdered drink mixes designed to slow cognitive decline. Photo submitted.

When ordering products for his own experiments, Brad said it helped to have the NCFIL’s legitimacy on Memore’s side.

The NCFIL is currently working on about 25 projects for a variety of companies, ranging from large multinational corporations to budding entrepreneurs like Erika and Brad. Aimutis estimates that about 80% of the lab’s clients are from outside of North Carolina, but he envisions that changing in the future as venture capitalists in the food technology space look toward the Tar Heel State.

Crider said the Rowan EDC is using the NCFIL as part of its pitch as it actively recruits companies in the food space.

“We’ve identified about 250 companies that are in that space that we feel are targets for growth, that may be in a growth space and are looking to expand or relocate facilities,” Crider said.

Part of that pitch, Crider said, is also explaining to companies that they could utilize Rowan County’s robust agricultural heritage to grow food products as well.