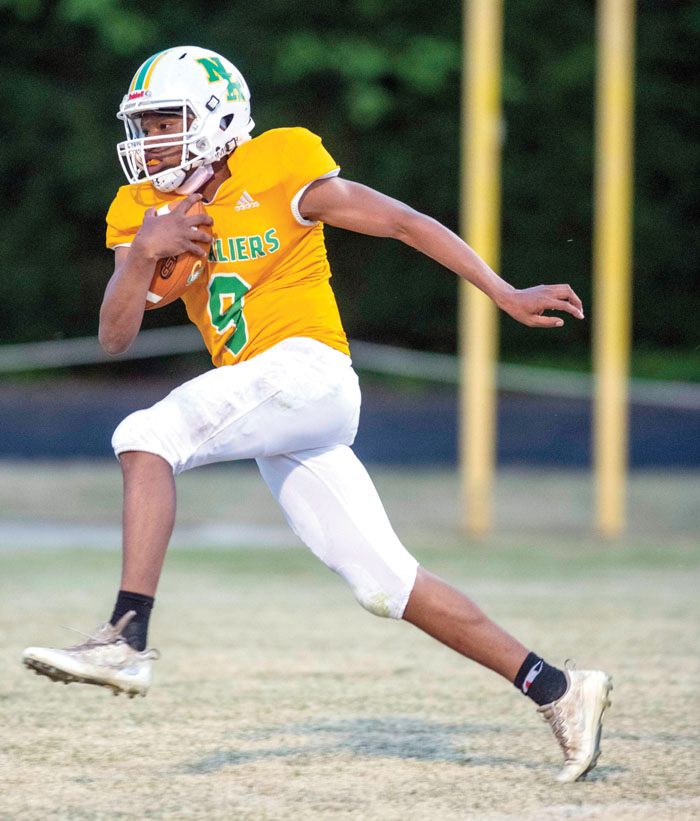 North Rowan’s Jae'mias Morrow is coming off a career game last week and will be looking for more in tonight's matchup against winless Lexington. File photo by JON C LAKEY/FOR THE SALISBURY POST.

RPI, not to be confused with RIP, will become the three most hated letters in Rowan County in the next few weeks.

It’s a mathematical equation that is being used for seeding the NCHSAA playoffs this season for the first time.

RPI is not a power rating or a measure of point differentials. With RPI, it doesn’t matter if you win by 6-0 or 60-0. A win is a win and a loss is a loss.

We’ve been at the mercy of odd MaxPreps ratings and odder MaxPreps adjusted ratings before, but this is something different.

And while it’s better than a random draw, this is not a system that is going to benefit Salisbury or West Rowan due to the underwhelming leagues they play in.

Because Salisbury owns victories against East Rowan (0-7), South Rowan (1-7), West Davidson (1-6), South Davidson (1-6) and Lexington (0-6), the Hornets absolutely get crushed by RPI, even with an 8-0 record and six shutouts and eight straight blowout victories, including one against 6-1 Thomasville.

Salisbury’s defense actually has outscored opposing offenses, which is crazy when you think about it, but that’s not relevant with RPI.

When updated RPI figures were released on Tuesday, Salisbury was ranked 10th. That’s not 10th in the state. That’s 10th in the 2A West.

Now, that doesn’t mean the Hornets will be a 10 seed in the 2A West playoffs.

What it does mean, unfortunately, is the Hornets are going to be seeded behind every 2A West conference champ with a higher RPI. So the Hornets may not be playing as many home games as fans had hoped and they’re going to be facing some challenging road trips.

The team ranked 11th, right behind the Hornets, is Forbush, which lost to Thomasville 49-0, and you probably remember what Salisbury did to Thomasville.

But the new system is what it is. The Hornets have no control over it. They’ll  have to deal with it.

Salisbury not getting to play that game with West Rowan on opening night is hurting both teams some now.

While West Rowan has won five in a row and will be fighting for the South Piedmont Conference championship Friday at Concord, the Falcons also are suffering strength of schedule woes. They are only 16th in RPI in the 3A West , so even if they can handle the Spiders, they’re going to be seeded behind a lot of people.

Figuring out the playoff field still starts with the conference races.

As far as the 1A/2A Central Carolina, there’s only automatic spot alotted for each classification. Salisbury has locked up the 2A berth. Barring truly mind-boggling events, Thomasville will be the automatic 1A.

Geographically, we already know who’s going to play in the East and who’s going to be in the West, which is different than in the past when almost anything could happen, such as Salisbury going to the East in 2019 and making journeys to Washington and Hertford County.

We also no longer have 2A and 2AA sub-classifications to fret about. That’s been done away with, as well. There are just four state championships at stake this season, not eight.

After the automatic qualifiers are figured out, RPI will determine the wild-card teams.

Davie benefits from a strong league and also from non-conference wins against West Rowan (5-2) and Lake Norman (6-2) and sits 20th in the 4A West RPI rankings. Thirty-two teams will make the bracket.

North Rowan plays in the same league as Salisbury, but 1A isn’t nearly as top-heavy as 2A. The Cavaliers are going to be in pretty good shape. Playing West Rowan helped them some, and the Cavaliers currently are 12th in RPI in the 1A West. They’ll not only be in the playoffs, they should get a first-round home game.

Two teams that were pretty much written off after four-game losing streaks — Carson and A.L. Brown — aren’t out of the playoff picture.

RPI could benefit them.

Carson is 2-5 but the Cougars are 37th (out of 54) in the 3A West rankings and could still move up by winning their last two. They’ll be favored in those two.

Carson’s RPI benefits from non-conference losses to Statesville (7-0) and Robinson (6-1).

The Wonders are 37th in the 4A West rankings but still have plenty of hope if they can beat Mooresville and Concord.

Salisbury is open this week.

Should be another routine win for the Cavaliers, who are favored by 26, according to the Massey Ratings.

Jae’mias Morrow is coming off a career game (four rushing TDs) against West Davidson. Freshman QB Jeremiah Alford was 10-for-12 passing in the romp over the Green Dragons and continues to shine, while electrifying receiver Amari McArthur accounted for two more touchdowns.

North is 26-16 all-time against the Yellow Jackets in what has been a good rivalry. Lexington stunned the Cavaliers in 2019, but North had won six straight before that.

This is North’s last tuneup before it goes to Salisbury to conclude the regular season.

Someone is going to end a seven-game losing streak in a tossup game Friday.

South is looking to end a 16-game losing streak against county opponents that dates back to 2016, but home field makes East a 1-point favorite, according to the Massey Ratings.

The Mustangs have won five straight in the series. South hasn’t beaten the Mustangs since 2014, but still leads all-time 32-22.

Friday’s marquee game and the game that can be listened to on WSAT.

Both teams own five-game winning streaks. Concord finishes SPC play with this one, while West will still have a game left with East Rowan.

It’s worth noting that when West won the first conference championship in school history in 2000, the Falcons claimed the South Piedmont Conference title by winning at Concord.

Concord leads the all-time series 16-7 and last tasted victory over West in 2016. West has won the last three meetings.

There have been famous West-Concord matchups. The programs squared off in the playoffs three straight years from 2010-12, and West QB B.J. Sherrill’s five-TD game against the Spiders in 2010 is still remembered.

West QB Noah Loeblein threw a county-record six TD passes last week in the romp against Central Cabarrus. Loeblein is only the 10th QB in Rowan history to surpass 4,000 career passing yards. His next TD pass will be his 50th. He’s also in the county’s all-time top 10 in that stat.

West has become a complete package in recent weeks, with an improved running game and stouter defense. West has been scoring in the 40s or 50s every week in the SPC.

Concord, which was pretty bad the previous three seasons, has made a huge jump back to contention this season under head coach Marty Paxton and defensive coordinator Ryan Crowder, the former Salisbury DC and head coach.

West is favored by two TDs, according to the Massey ratings.

It probably comes down to whether or not run-heavy Concord can control the ball and keep Loeblein and his dynamic receivers on the sideline.

Still in the hunt for a playoff spot thanks to the RPI system and non-conference losses to strong teams, this is a must-win for the Cougars.

The bad news is Carson is 1-5 all-time against the Vikings. The Cougars’ lone win in the series came in 2016.

On paper, this game looks to be about as even as any game can be.

Carson is a 1-point underdog on the road, according to the Massey Ratings, but keep in mind that the Cougars have played their best two games the last two weeks.

Davie has rolled Parkland in recent seasons, and this one should be no different.

The fast-paced War Eagles might get to 65 or 70 against a team that hasn’t been stopping anyone.

There aren’t many breaks in the Central Piedmont Conference. Davie will enjoy this one.

Mooresville is a 9-point favorite, according to the Massey Ratings.

While the schools are only 15 miles apart and care about football deeply, they didn’t play each other from 1968 to 2000.

It’s good to finally have them in the same league.

The Blue Devils, who are piloted by former Catawba star and North Rowan and West Rowan head coach Joe Nixon, have won the last two and four of the last six.