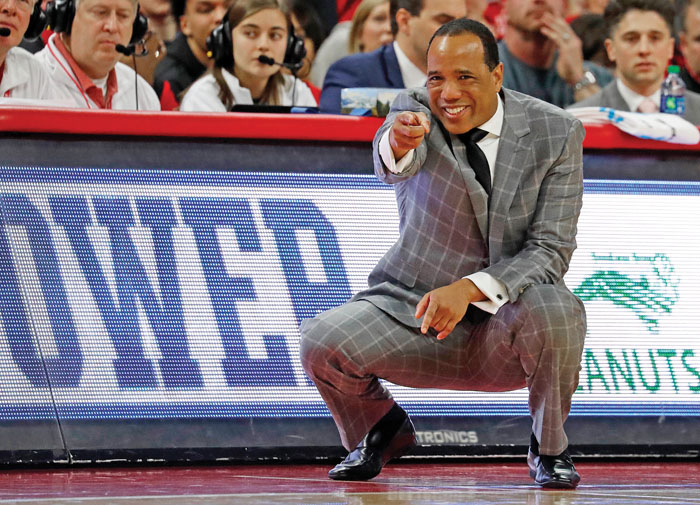 AP File Photo/Karl B DeBlaker ... N.C. State head coach Kevin Keatts says, ‘I like the direction our program is going in.’

Kevin Keatts has had North Carolina State routinely pushing for 20-win seasons in his first four years, though he has just one NCAA Tournament berth — partly through bad luck — to show for it.

The plan is to make those trips a more consistent outcome, starting with this year’s team that has Keatts excited about its versatility.

“I like the brand that we’re building,” Keatts said. “We’re getting there. We’re putting some pieces on the floor that can be effective every night. I like the direction our program is going in.”

N.C. State made the NCAAs in Keatts’ first year, then fell on the wrong side of the bubble on Selection Sunday despite having 22 wins in 2019. His third team had hit 20 wins again and looked in position to claim a bid entering the Atlantic Coast Conference Tournament before the COVID-19 pandemic shut down the rest of the season.

Last year, N.C. State (14-11, 9-8) had its lowest win total under Keatts while losing leading scorer Devon Daniels to a season-ending knee injury in late January. That team went on to win a game in the NIT. Keatts’ is counting on that team’s response as a reason for optimism. N.C. State won five straight league games after a 4-8 start, and returns multiple players with experience — namely full-time starters Jericole Hellems and Manny Bates.

“The thing about this team I think that you guys will like is we’ve got several guys that can play multiple positions,” Keatts said. “I’m excited about the veterans who are returning. Unfortunately when Devon Daniels went down, we had to shift everything. But it helped some guys grow.”

Hellems, a 6-foot-7 senior, is the top returning scorer at 12.9 points and can shift between forward and what Keatts prefers to call a “big guard” spot. Then there’s Bates, a 6-11 redshirt junior who has become a defensive force.

Bates averaged 9.8 points and 5.9 rebounds while ranking 11th in Division I with 2.7 blocks per game.  The team also returns two guards with at least 14 starts in sophomore Cam Hayes (7.8 points per game) and senior Thomas Allen (7.4).

The Wolfpack found help in the transfer portal with 6-3 junior guard Casey Morsell from Virginia and 6-8 forward Greg Gantt from Providence. N.C. State opens at home against Bucknell on Nov. 9

Hubert Davis’ connections to North Carolina have touched just about everything in his life.

He played under late Hall of Famer Dean Smith before a 12-year NBA career. He coached under another Hall of Famer in Roy Williams. The program ties even reach into his family as the nephew of 1970s program great Walter Davis.

Now the 51-year-old first-time head coach — who took over after Williams’ retirement in April — is operating as a bridge from No. 19 UNC’s tradition-rich past to its future.

“It’s not just this job,” Davis said. “There hasn’t been a decision that I have made where I haven’t thought about what Coach Smith and what Coach Williams and what Coach (Bill) Guthridge would say or do.”

The first job for Davis — the program’s first Black head coach — will be to squeeze consistency out of a roster that befuddled Williams last season before bowing out in the first round of the NCAA Tournament.

“I just feel like it’s a blessing that he got the job because I feel like we already had a connection when he was an assistant,” sophomore point guard Caleb Love said.

Picked to finish third in the Atlantic Coast Conference, the Tar Heels (18-11, 10-6) return their top scorer and rebounder in 6-foot-10 junior Armando Bacot, as well as Love as the returning point guard.

“Carolina is going to be Carolina because I believe in it and I trust it,” Davis said, “but I’m also going to do it with my own personality and my own shoes.”

The Tar Heels ranked 263rd in Division I in 3-point percentage last year (.318) and 307th in made 3s per game (5.6). UNC had just one reliable outside shooter in Kerwin Walton, who hit 42% from behind the arc as a freshman but found himself facing heavy defensive attention in that role. The Tar Heels are hoping Manek in particular can help after making 235 3s in his time at Oklahoma.

North Carolina opens at home against Loyola (Maryland) on Nov. 9.

No. 9 Duke aims to send
Coach K out with a final title run

Mike Krzyzewski knows all the attention and hype that will follow what amounts to his farewell tour with ninth-ranked Duke.

He’s also determined to focus on how to get his Blue Devils to win another Atlantic Coast Conference championship or return to the Final Four than his upcoming retirement, which will end a Hall of Fame career unlike any other.

“I’ve told my staff and everyone around me not to use the word ‘last,’” said Krzyzewski, who has a Division I-record 1,170 career wins with five NCAA titles. “This is my 47th year, my 42nd year at Duke. I’m going after it the way I’ve gone after it every year.”

The 74-year-old Krzyzewski announced in June he would retire after this season, with former Blue Devils player and associate head coach Jon Scheyer taking over as his successor.

The Blue Devils (13-11, 9-9) are coming off an uncharacteristically struggle-filled season amid the COVID-19 pandemic. They return just four players who saw significant minutes for a young team that missed the NCAA Tournament for the first time since 1995. But the Blue Devils have restocked with another touted recruiting class and are again the ACC favorite, led by preseason league player and freshman of the year Paolo Banchero.

The 6-foot-10, 250-pound Banchero  is the headliner  as a potential No. 1 overall NBA draft pick with perimeter and ballhandling skills. The Blue Devils have also added two other five-star prospects in guard Trevor Keels and small forward A.J. Griffin, and a four-star point guard in Jaylen Blakes.

Griffin is recovering from a knee sprain and he missed all last season with an ankle injury, so there’s an longer-term rust factor for him to overcome.

The Blue Devils open against No. 10 Kentucky on Nov. 9.

Steve Forbes spent last year as a new head coach trying to build a foundation amid the starts and stops of the COVID-19 pandemic. That’s why he isn’t focused on taking a lot from his debut season at Wake Forest. If anything — much like players who received an extra eligibility year from the NCAA due to the pandemic — he’s getting a second freshman season with more normal routines.

“I haven’t really talked about last year at all, to be honest with you,” Forbes said. “This is the first year as far as I’m concerned.”

“A lot of the teams I’ve been on before had maybe one or two seniors and then most of us were sophomores and freshmen,” said senior Isaiah Mucius, who averaged 10.3 points last year. “I think that balance allows the younger guys to kind of look up to us and then the older guys to lean on the younger guys for that energy when we need it in practice or games.”

The Demon Deacons open against William & Mary on Nov. 10.

GREENSBORO (AP) — Fifth-ranked North Carolina State will open the season as the Atlantic Coast Conference favorite, while senior center Elissa Cunane is the preseason player of the year.

The ACC on Wednesday released results in voting by the league’s 15 head coaches and its Blue Ribbon Panel that includes broadcasters and media members while factoring in the coaches’ selections.

Wes Moore’s Wolfpack topped both polls of No. 6 Louisville.