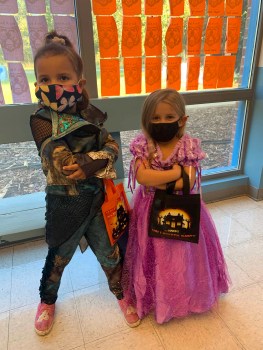 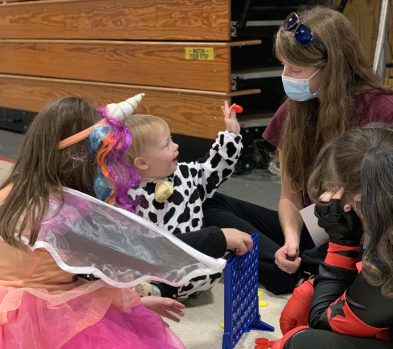 Submitted photo - Luna Crowther and Leah Smith working on an activity with their mom and baby sister.

There was fun and candy to sweeten the deal as part of the school’s first iteration of Trick or Treat: Math is Sweet. The seasonally themed event took kids into a fall wonderland with some practical applications for the math they learn in school.

They played math board games, made estimates on candy, calculated circumferences of pumpkins and got a couple bucks to make a decision: purchase a larger treats at the school “candy store” or save their money.

Nina Ervin, a student, said it was fun to learn about money and buying candy.

Reading coach Samantha Zekan came from another school district and pulled on some of her past experience to build the event with technology facilitator April McKee and the school leadership team. McKee said fall festivals are popular this time of year, and the school wanted to combine the popular theme with math standards. About half the students attended the event, and that success was attributed to how fun the activities were.

“What made it so successful is we had the math intertwined,” Zekan said.

Zekan said the candy store was set up in one of the classrooms. Students got $2 in coins and they had to use math to purchase the items they wanted. The event was so well attended they had to get more change than they expected for the candy shop.

Some of the activities were scaled to grade level. Second and third graders estimated weights of pumpkins while fifth graders used yarn to estimate circumferences of gourds. Every student got to make estimates on jars of candy.

The event occurred during an exceptionally busy time for the school. McKee was wrapping up the annual book fair, but she said it was worth the time investment to support the kids and get the community involved.

“We talked about how bad our feet hurt that night,” McKee said. “It was totally worth it.”

Zekan said the kids could not believe they received real money to buy candy with and many were dressed up in their Halloween costumes.

Second grade teacher Taylor Boice said it was her favorite event held at the school.

“Math night is all I heard about from students when we shared about our fall breaks,” Boice said.

Many of the materials were donated by school families, including candy. Josh’s Farmers Market donated 100 pumpkins and Hoffner Organic Farm donated bales of hay.