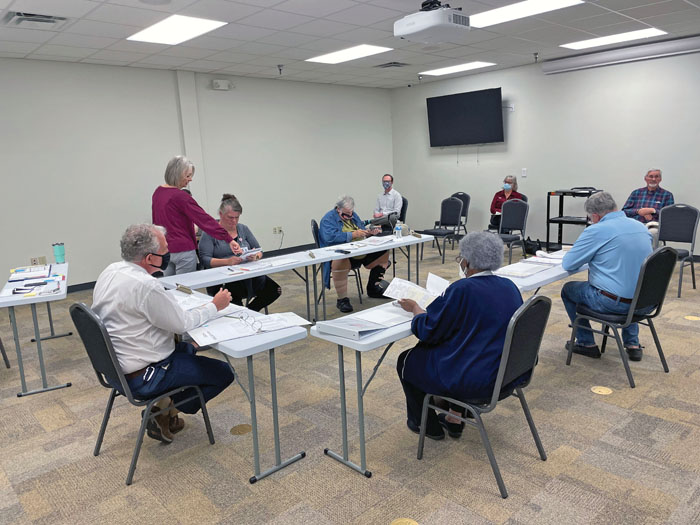 Natalie Anderson/Salisbury Post — The Rowan County Board of Elections tabulated 25 absentee by mail ballots Tuesday for the 2021 municipal election in Rowan County.

SALISBURY — Local residents criticized the Rowan County Board of Elections Tuesday for publicly discussing the replacement of an elections supervisor during its Oct. 12 meeting.

During the Oct. 12 meeting, board member George W. Benson said he was opposed to Richard Dillon serving as supervisor during one-stop early voting. Benson cited a concern he voiced in July when board members discussed the feasibility of curbside drive-thru voting for future elections. Benson’s complaint was that during the 2020 election Dillon didn’t properly handle disruptions caused by a caravan of vehicles participating in a pro-Trump parade and a few vehicles holding “Make Good Trouble” signs that both made their way to the no-campaigning zone at the West End Plaza. State law provides a “buffer zone” at elections sites, with no campaigning allowed within 50 feet of the entrance.

Additionally, Benson said at the Oct. 12 meeting that he recalled speaking with Dillon during one-stop early voting in 2020 about needing more staff to help with curbside voting because more than 20 cars were waiting in line an hour after the voting site opened. Benson said he was told it would be handled and didn’t feel that it was.

Board members on Oct. 12 unanimously voted in support of Benson’s motion to replace Dillon, who’s registered unaffiliated, as supervisor with Henry Diggs, a registered Democrat. Board member Dave Collins was not present. Later in the day, board members agreed via email to move forward with the original list because Diggs declined a request from elections director Brenda McCubbins to be supervisor. Additionally, the early one-stop voting period was set to begin in less than 48 hours.

Susan Waggoner, a Salisbury resident who was an elections worker in 2020, said workers were “delighted” to see the large turnout in 2020. She assisted with curbside voting and said each car was given the same amount of attention. Additionally, she said Dillion was knowledgeable and helpful when supervising.

Local Republican Elaine Hewitt said looking over the lists of elections workers is a normal process, but she was concerned with Benson’s nomination of a registered Democrat to replace Dillon, who’s unaffiliated, and therefore questioned whether it was a partisan move rather than balancing the workers.

Board chair John Hudson said Dillon took the discussion as an insult, and volunteers did, too.

Collins said it “irritated” him that the board would discuss the issue of a specific elections worker during an open session meeting and called for the board to publicly apologize. Collins also told Benson that he should have discussed the issue with McCubbins and that Dillon operates under the direction of McCubbins while supervising precincts.

Benson said “we’ll agree to disagree” and clarified there were two problematic caravans of voters during the 2020 election, not just the pro-Trump caravan of vehicles. Additionally, he told the Post his reason for suggesting Diggs was based on his success supervising precincts in Spencer, not because of his political affiliation.

While poll observers are designated by each county party, election officials are paid by the hour and must first pass a background check and be processed by human resources. Wages typically range around $13 an hour for supervisors and around $11 for workers. Supervisors are tasked with working all day during one-stop early voting.

Also at the meeting, board members opened and tabulated 25 absentee by mail ballots that have been received so far. Three were received by the Oct. 12 meeting and added to Tuesday’s total. By the end of Tuesday, a total of 790 one-stop votes had been cast, which represents almost 2% of registered voters in Rowan County.

McCubbins said a total of 209 absentee by mail ballots have been sent to voters. Only three have returned incomplete for witness signatures, but McCubbins said one of those voters decided to cast a ballot in-person instead and another voter has since fixed and resubmitted their ballot. None have to be cured at this time.

The board will meet again on Tuesday, Oct. 26, to continue counting absentee by mail ballots. Meetings are held at the elections office, located at 1935 Jake Alexander Blvd. West.