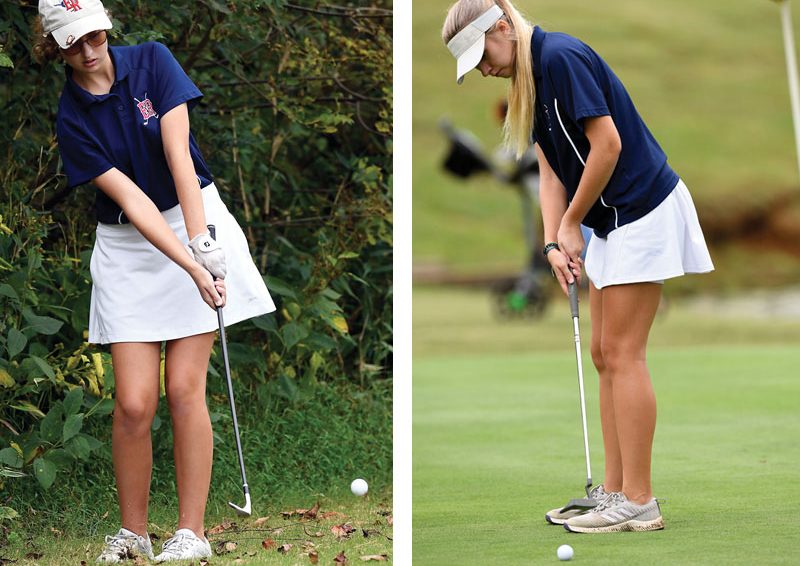 East Rowan’s Emma Callahan, left, and Hannah Waddell during the county golf championship on Oct. 10. Photos by Wayne HInshaw, for the Salisbury Post.

The teammates got there in different ways, but they tied for seventh at 16-over and led the Mustangs to the 3A West Regional championship.

“The girls have been playing in Greensboro (in the Central Regional),” East coach Tinsley Merrell said. “So a new course today and a lot of new opponents today. We didn’t know what to expect, so I’m really proud of the girls for putting it on as a team today. All three of them had to come through. They did.”

East’s third scorer was sophomore Addison Queen, who was seeing Glen Oaks for the first time. She shot 91 and tied for 16th.

East played without the fourth member of its team. Emma Cornelison was on a family vacation that had been planned for a long time.

Playing with three girls — that’s the minimum to post a team score — can be scary. No one can step in a hole and sprain an ankle. No one can completely blow up.

Play started early, with Queen teeing off on No. 1 at 9:10 a.m. Callahan and Waddell followed at 10-minute intervals.

“I gave up my cart and was running around, trying to look through the trees and trying to watch all three of them,” Merrell said. “It was a little chilly when they started and I was worried about the girls being out there in skirts, but then it warmed up quite a bit. It turned out to be a perfect day for golf, and we were grateful. They played in some miserable conditions last year.”

Waddell, the Rowan County champion the past two seasons, is normally the least of Merrell’s worries, but she got off to the shakiest start.

“Hannah struggled some today,” Merrell said. “But you can’t shoot 76 every day. Today, she had to just grind it out.”

Waddell double bogeyed No. 1 and took a triple bogey on the par-5 No. 2 hole. Waddell doesn’t make many 8s.

After another double on No. 4, she stood 8-over after four holes. But then she found it. She made birdies back-to-back on 6 and 7 and got back on track for a respectable round.

It was an uncharacteristically crazy day for Waddell — three birdies, four pars, five bogeys, four doubles and two triples — but she battled through it.

“She wasn’t satisfied with 86, but the thing is she did enough,” Merrell said. “She did enough for us to win as a team because the other girls stepped up.”

Waddell made it to the state event as an individual as a freshman, but Callahan was determined to see the team make it in her final year.

“Making the state tournament as team has been her big goal all along, and she understood that we didn’t have to have birdies today to make it,” Merrell said. “She just had to keep it consistent, to stay right  around bogey golf. She was a great senior leader today. She had it dialed in from the start.”

Queens had some rough holes, but she balanced it with good ones. She made six pars and had a birdie on No. 6.

“We had a few big numbers today, more than we’d like,” Merrell said. “But the girls kept at it.”

They were good enough that the Mustangs will be playing golf on the last day of the season. That’s always the goal.

In the 1A/2A Central Regional at Monroe Country Club, Gray Stone was the team champion at 35-over par.

Hannah Lineberry, who is from Salisbury, shot 85 for Gray Stone and tied for fifth. Allison Frey was the third scorer for the Knights at 94.

West Stanly and Union Academy were the other teams qualifying for the 1A/2A  State Championships to be held next week at Longleaf.

Salisbury’s Sydney Hlavacek tied for 18th at 101. Salisbury was fifth in the team scoring. Courtney Williams (111), Sophie Chmiel (118) and Hannah Schmeltzer (131) competed for the Hornets.